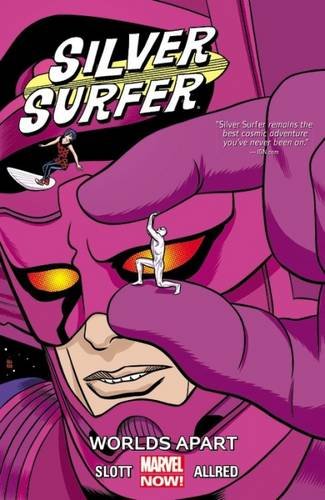 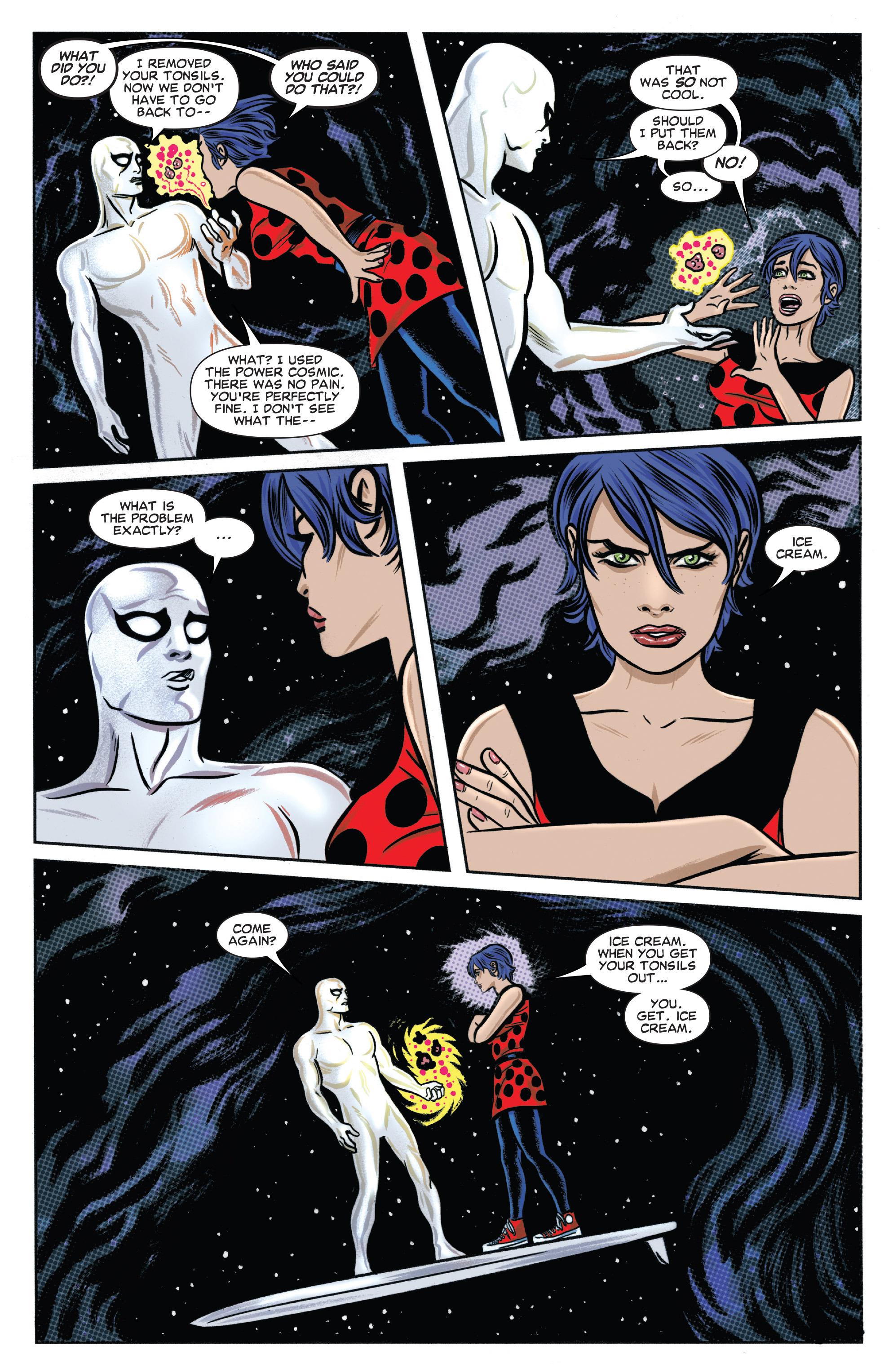 New Dawn was fun. Yes fun, not a term normally associated with the Silver Surfer, and it continues here. We actually see him laugh. The change is due to the focal point being Dawn Greenwood as much as the Surfer. She’s grown up in Cape Cod and suppressed her desire to travel before now, leaving the globetrotting to her twin sister, and her presence has several purposes. As well as being a clever nod to It’s a Wonderful Life, she prevents the Surfer’s usual tiresome self-analysis by giving him a companion, and further one well capable of pricking his pomposity, and she’s a conduit for Dan Slott’s very funny dialogue.

He treats the opening chapters as finely plotted comedy dramas, yet still serving up enough in the way of superheroics. In the second he even manages to insert several mini adventures, each of them perfectly plotted across two pages, and indicating that the Silver Surfer and Dawn Greenwood have now been companions for some time. Slott also comes up with a neat trick that adds to the cast in such a perfectly logical manner that it’s a wonder no-one’s ever considered this before. And it builds on something introduced in New Dawn.

Dawn’s been interestingly designed from the start, in typically bright Laura Allred colours, wearing a red dress with black spots, and Slott now constructs a charmingly logical reason for those shades exemplifying the depth of thought applied to the series. “It was Dad. When he found out Mom was having twins he was so afraid he’d mix us up he got a bumblebee onesie for Eve and a ladybug onesie for me. They’ve always been our thing”.

Michael Allred’s thing is that he’s always been a wonderful artist, and his presence is an indication of how the audience has broadened over the years. Beginning in the 1990s there was no way his style would ever have been considered for a Marvel comic, and many eyebrows were raised by his appointment on X-Force in 2001. Now no-one bats an eyelid, and that’s as it should be.

At the halfway point Slott switches into more serious mode as the Surfer’s past as herald to the world devouring Galactus comes back to haunt him in tragic and imaginative manner. For Dawn, who’s come to know what she believes is the Silver Surfer’s personality this is akin to discovering she’s been soaring through space with Hitler. Worse still, once she has an idea of what Galactus is, he turns up.

Galactus has, perhaps, been over-used, his threat diminished as we’ve become accustomed to him, yet few superhero readers forget their first Galactus comic. He’s that imposing. What Slott and Allred do extremely well is establish exactly what he is, and how that impacts on billions of innocents. There’s no attempt to mitigate here, to explain him as a cosmic necessity merely following survival instincts. The sympathy is very much with the billions of victims. Allred helps by illustrating Galactus as gnarled and wrinkly, not statuesque and epic, and Slott’s eventual solution to him is novel, heroic and enthralling.

He and Allred continue with Last Days.