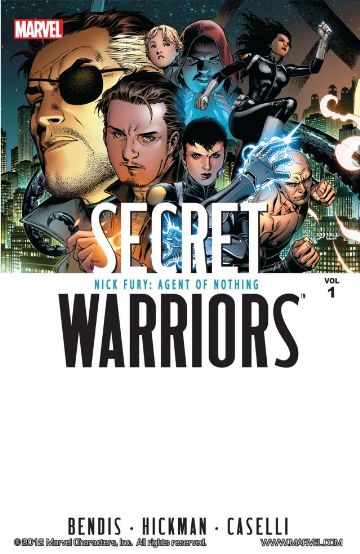 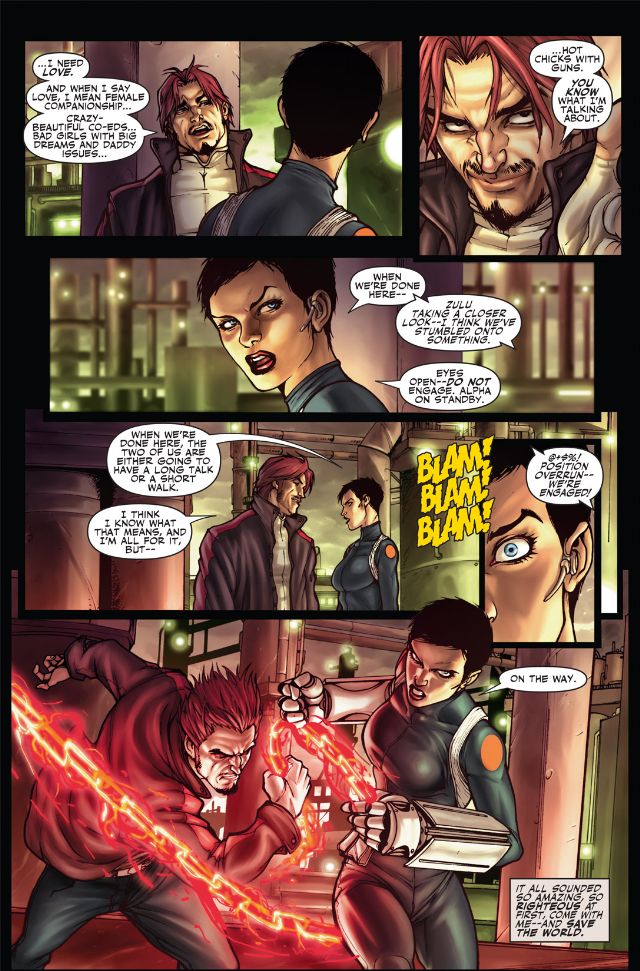 Nick Fury is one of Marvel’s more complex and interesting characters. Known as head of global defence agency S.H.I.E.L.D., he was forced underground before the events of Civil War, yet in Secret Invasion he resurfaced with a group of super-powered agents to help fight the Skrulls, before disappearing again. Playing to the tune of his own agenda, he is the centrepiece around which Secret Warriors revolves.

S.H.I.E.L.D. is officially no more, disbanded by Norman Osborn and replaced with H.A.M.M.E.R. (essentially ’reformed’ villains masquerading as a new format of the Avengers) as it not only failed to predict the events of Secret Invasion, but was also completely compromised and controlled by Hydra. Fury may not officially be working for the United States government anymore, but he hasn’t got that memo yet, and damned if he’ll stand by and do nothing. He’ll keep his country and the world safe no matter what it takes to achieve that. Chopping off the heads of Hydra and killing Baron Von Strucker while looking for the chance to punch Osborn in the mouth is only one part of the plan.

If you read Secret Invasion you will at least be a little familiar with the Secret Warriors. Fury’s protégé Daisy Johnson (Quake) is the leader of Team White, responsible for keeping the rag-tag offspring of super-villains in line. Enter J.T. Slade (Hellfire),Yo-Yo Rodriguez (Slingshot), Sebastian Druid (The Druid), Jerry Sledge (Stonewall), Alexander Aaron (Phobos, the god of Fear), and Eden Fesi (trained by the mutant Gateway and able to teleport). They’re all highly powerful, but lacking direction or, in J.T’s case, any integrity. They are cocky and inexperienced, yet Fury’s best chance of shutting down Hydra.

Released as part of Dark Reign (with a number of marvel events seemingly queuing up around the corner) Secret Warriors: Nick Fury, Agent of Nothing stands out because it is driven more by plot and strong character development than for its title branding (you buy Avengers, X-Men, Iron Man primarily because of the characters in it). Co-plotted by Brian Michael Bendis (who co-created the Secret Warriors with Alex Maleev), it is scripted by Jonathan Hickman with a number of interestingly complex personalities amid a plot more akin to an espionage thriller and surprises aplenty, as the remnants of S.H.I.E.L.D, H.A.M.M.E.R and Hydra all go head to head. Rising from the ashes is obviously Nick Fury, the grizzled old war-horse determined to win at all costs, morality be damned.

Hickman pens some explosive revelations and yet is clearly still holding some aces up the sleeve.
Stefano Caselli’s art keeps the tense tone with fresh lines, the chaotic battles heightened by the additional illusion of bright lights and explosions. With input from colorist Danielle Rudoni, Caselli crafts a brooding atmosphere that holds well against simple backgrounds of white, black or any other colour. It is violent (although the gore is hidden), working without dialogue when it has to and keeping within its rating.

What’s most refreshing about Nick Fury, Agent of Nothing is that it is a Marvel story that’s not entirely dominated by, or relying on, epic fight scenes. This is the brutal world of international espionage with a meta-powered slant, this story reeling you in for the next volume entitled God of Fear, God of War. Both are also available in a bulkier paperback The Complete Collection Volume 1, and with all other Secret Warriors material in an oversize Omnibus edition. 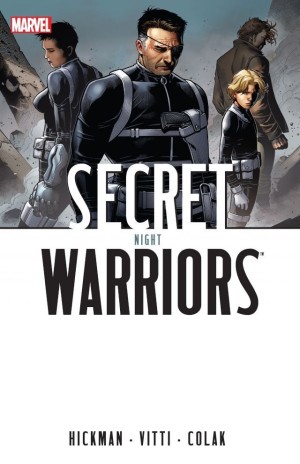