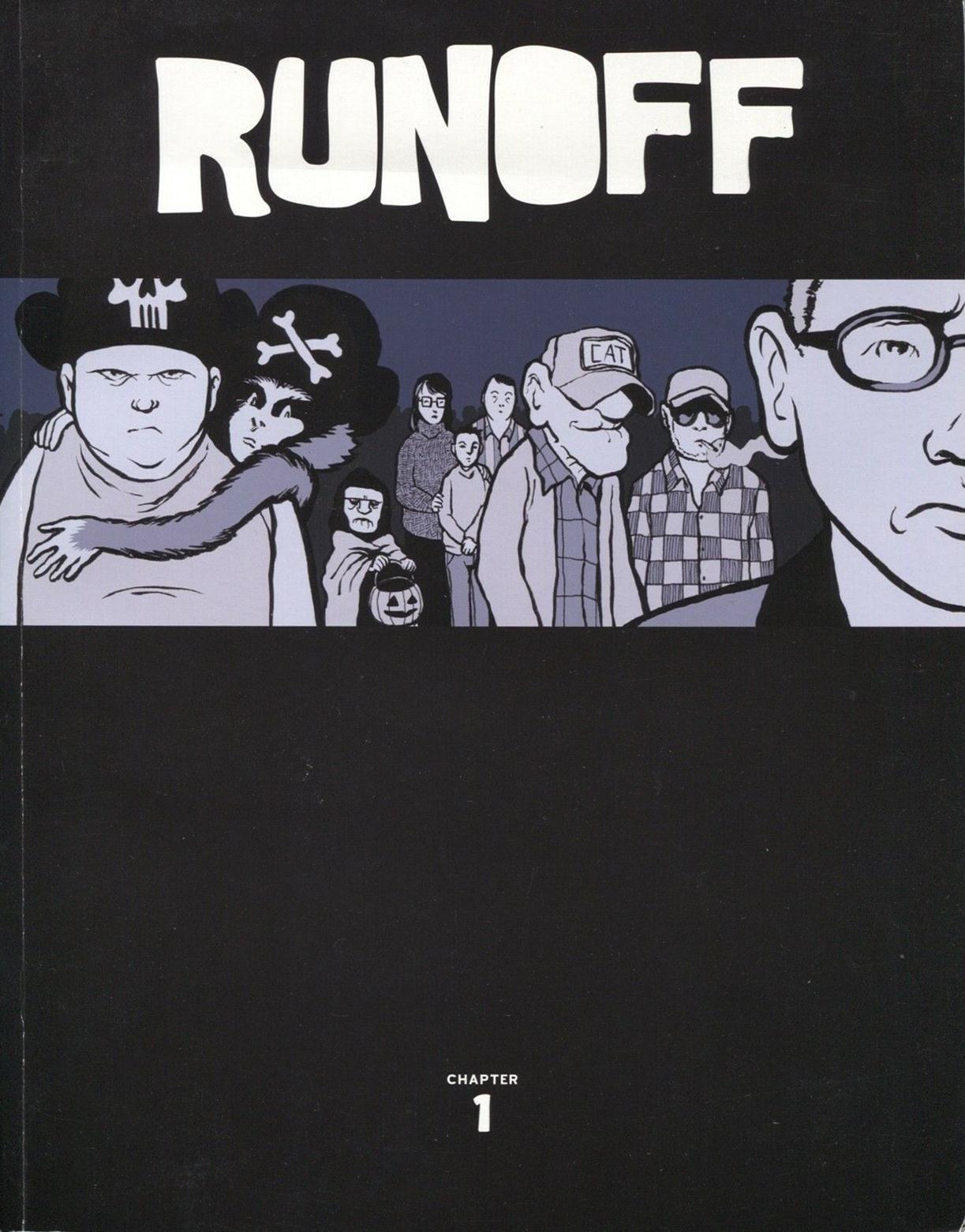 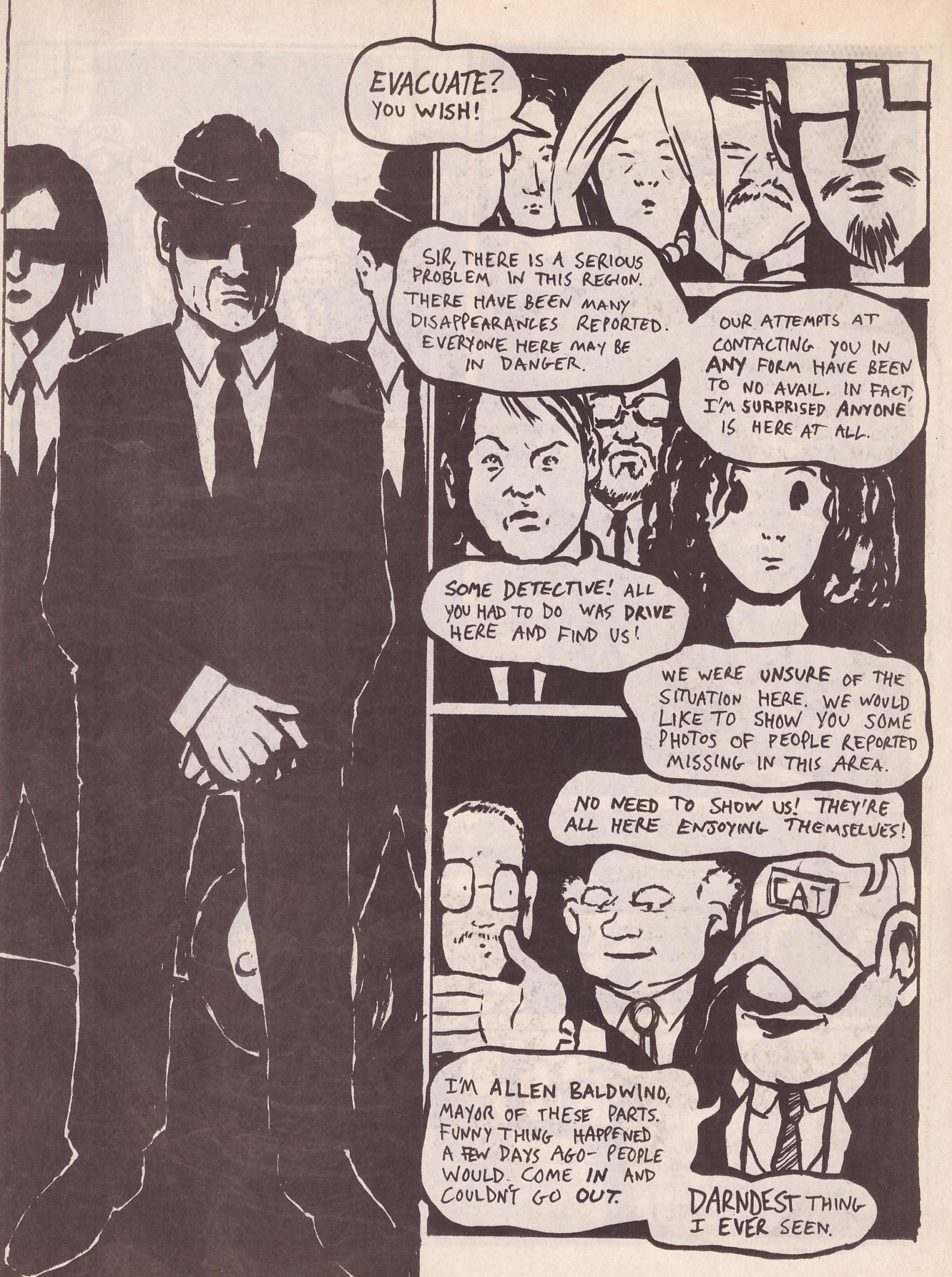 Over twenty years Tom Manning has carved out his own niche for thoughtful graphic novels in his individual style, progressing all the time, and beginning with Runoff, a thoughtful horror series examining a rural community under pressure.

That community is Range, in Washington, the point of entry being trucker Gus Carver on his way to visit his brother, who hits and kills a local hunter/poacher, after which several strange events occur. There’s a second corpse, a man with large teeth, three further dead hunters on Native American land, and a strange little hovering machine. Although written a good decade after Twin Peaks, it’s the natural comparison given the mixture of inexplicable events, North-Western location and eccentric inhabitants. Gus’ brother Mort, for instance, considers himself a pirate and has an extraordinarily talented monkey helping him out. We subsequently learn that people seem to be able to enter Range, but they’re unable to leave, which brings its own problems.

Manning takes an interesting approach to Runoff by keeping the mysteries hanging while touring Range and introducing the cast who’ll recur over three volumes. They have personalities and peculiarities able to sustain a series, and some caricatures are nice, wily old Mayor Baldwino making an impression from beneath his baseball cap. The final chapter’s extended funeral sequence is smartly written, presenting a selection of character definitions, ranging from the humane to the huckster, and having an awkward realism to it. Almost everything is well plotted and intriguing, with a great dramatic pacing, and several belly laughs, particularly when the FBI show up. It means Runoff reads extremely well as an examination of ordinary folk faced with a situation completely beyond their comprehension. Unlike city folk, these are take it as they see it people, and therefore in some respects more open minded.

If Manning were just handling the writing it’s likely Runoff would rank much higher, but the good is sabotaged by the art. Manning can draw. His people are distinct and there’s a functional impressionism to the scenery, but his methods of laying out a page discredit what’s done well. A fatal decision is to separate panels with black lines instead of the usual borders and bleed everything off the sides of the pages, which doesn’t allow for any definition. The cast are blocked in, figures run together rather than free, and the format defines the almost featureless backgrounds also. Additionally, there’s not enough variation to the viewpoints. It’s a strange choice as what Manning can achieve is seen when he drops in a spread pastiching his biggest influence, the Bloom County newspaper strip. His gags are funny, but importantly the panel spacing shows Manning can draw more effectively. The poor storytelling really comes into focus during pivotal action sequences where it’s difficult to make out what’s going on.

There are considerable rewards to struggling through the art, but many won’t be able to. The final pages arrive at the ending we’ve been anticipating all along, setting up Chapter 2 very nicely. Alternatively, all three graphic novels are combined in one four hundred page package also titled Runoff. 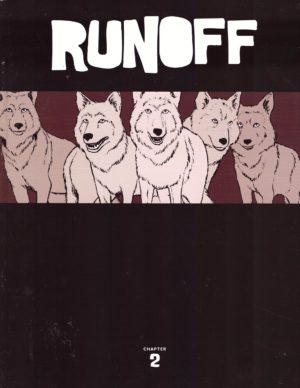 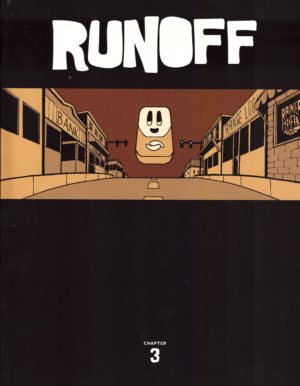