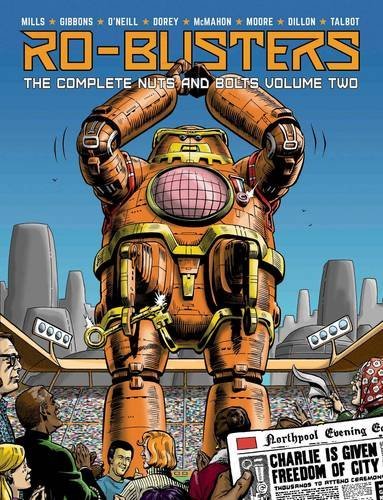 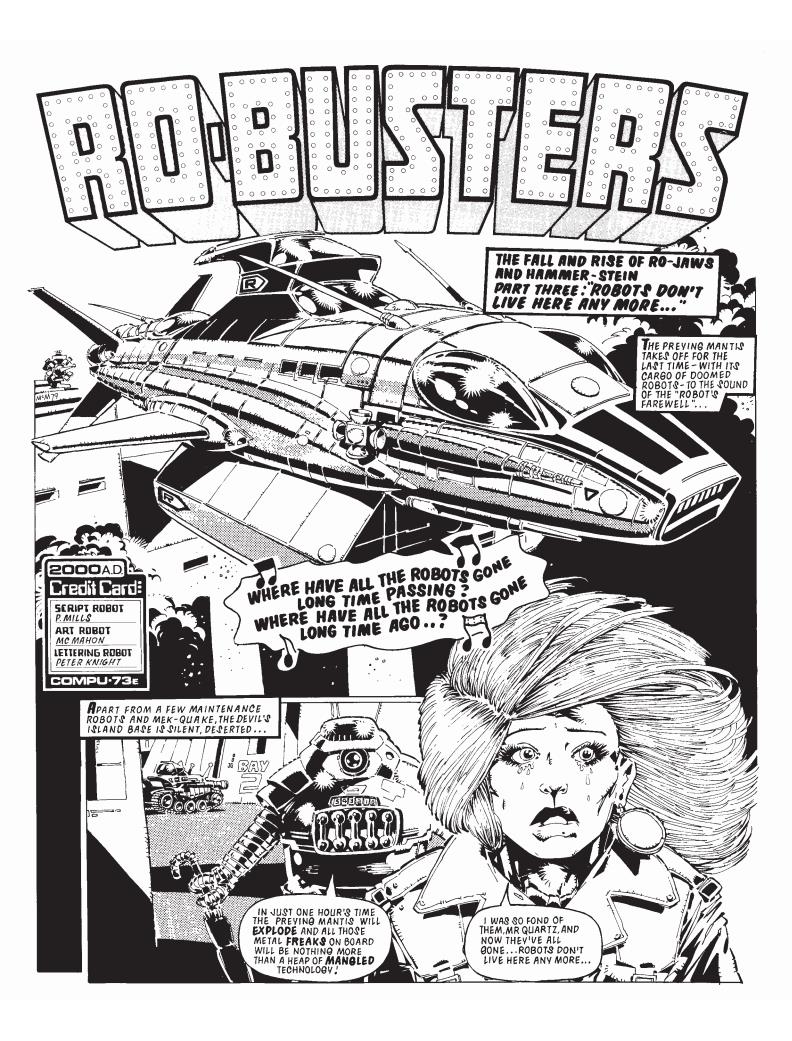 Under a fine Dave Gibbons cover representing the best story within, this second collection completes the reprints of the late 1970s/early 1980s robot rescue squad. This hardcover  improves on volume one as far as Ro-Busters material is concerned.

That’s because writer Pat Mills lost any interest in the idea of a robot rescue squad, and instead decided to concentrate on the social conflict of employer and employee, wealthy and poor, but played out via robots. Ro-Busters is run by Mr Ten Percent, referring to his human brain being encased within a robot’s body, and he has little sentimentality when it comes to making a profit. That comes to a head when the terrifying Terra-Meks are sent to demolish the city of Northpool. Northpool, though, has an unlikely saviour, brilliantly illustrated by Dave Gibbons, delivering the finest work he produced for 2000AD. That story alone is almost five star material, still delivering the emotional melodrama of a good action movie.

Lead characters Ro-Jaws and Hammerstein are absent from that, but star in the book’s longest narrative when Mr Ten Percent decides to close down Ro-Busters. Not wanting to make a loss, though, he plans the old ship-owners trick of destroying a vessel with all on board dying in order to claim insurance compensation. Discovering the plan Ro-Jaws and Hammerstein become involved with an underground organisation ferrying robots to freedom. Mills keeps the pages turning, and there’s some fabulous artwork from Mike McMahon (sample page) and Kevin O’Neill, with Mike Dorey’s pages conveying a grimy detail. It drags on a little too far, but works toward a spirited finale.

That only takes us halfway through the book, though. Much of remaining Ro-Busters content is tryouts for new creators on strips that appeared in annuals and specials. With few exceptions the credits have long been lost, for which those responsible should be grateful. There may be some attraction at the mention of three stories by Alan Moore, illustrated by Steve Dillon, Bryan Talbot and the lesser known Joe Eckers (on a Thunderbirds pastiche), but by Moore’s standards they’re trivial. It’s odd to be reminded of Dillon’s early, more detailed style, though.

Those who’d prefer all Ro-Busters stories between two covers, albeit on pulp paper, can pick up The Complete Ro-Busters, but this collection also includes associated material missing from that. Six ‘Ro-Jaws Robo Tales’ are very welcome for gathering a Mills and O’Neill comedy effort and a lot of Gibbons art not seen since its early 1980s publication. The brief was a six page shock ending story somehow involving robots. Moore writes one tale, but those by Gary Rice are better, with his story of five times jailed Rueben T. Corona exploiting his faithful robot very good, with Gibbons excelling.

The final segment reprints covers and pin-ups featuring the Ro-Busters characters, with some gems from Gibbons, McMahon and O’Neill.

It’s Gibbons who’s the star turn throughout, and for his fans the opportunity to pick up dozens of pages never reprinted surely redeems the cover price, never mind the inclusion of his finest work for 2000AD. Anyone concerned about a story will find this somewhat slimmer fare, and would be better sampling via The Disaster Squad of Distinction collection, which creams the best from both Nuts and Bolts books.