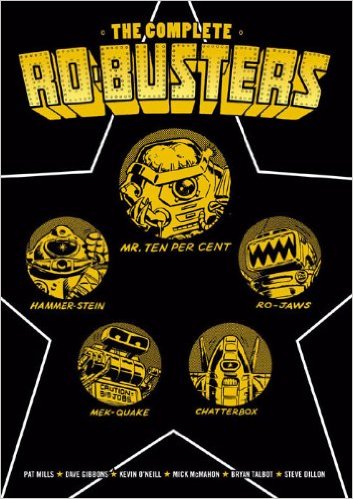 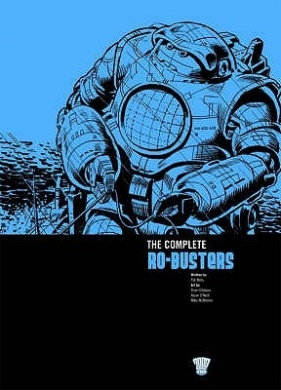 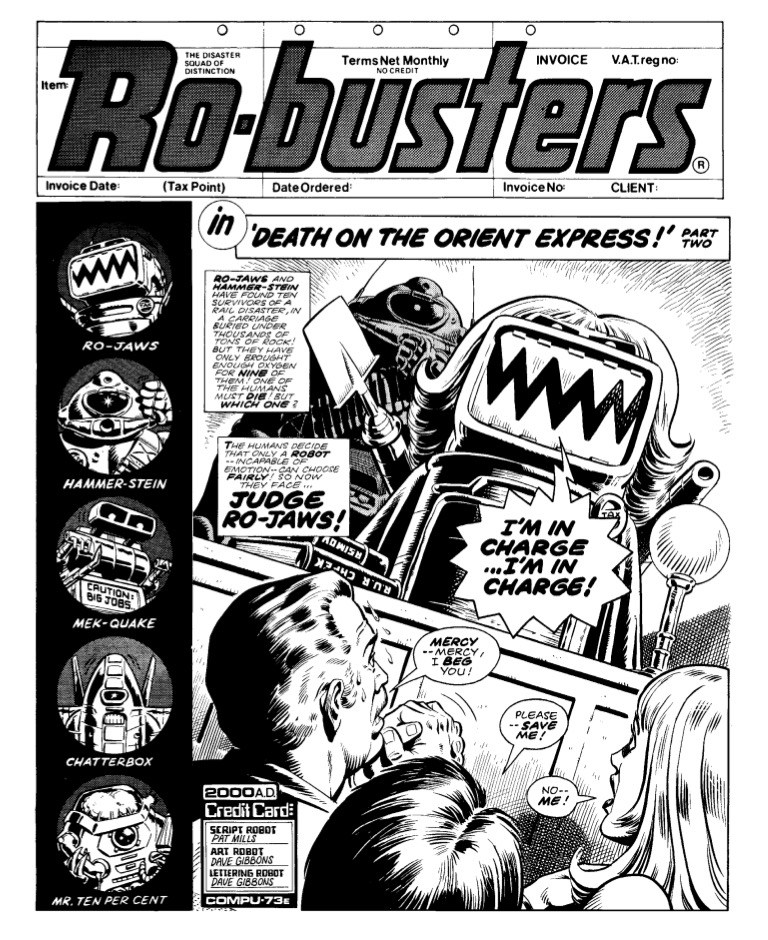 This is very much a book of two halves, with the first resolutely ordinary, and the second displaying some spirit.

Ro-Busters were suggested as super-powered ex-servicemen going on rescue missions. When Pat Mills became scripter the military were junked and replaced by robots designed by Kevin O’Neill, then an art editor, and who’d published fanzines with strips about robot wars. His designs are terrific, even down to the smaller roles, memorable and effective. It’s a shame the same can’t be said about the opening stories. They were written for Starlord, a largely colour companion title to 2000AD, the success of which had rather surprised the publishers. This, though, was the early 2000AD when the audience was presumed to be pre-pubescent boys, and Mills pitched the series appropriately. The plots are competent, but uninspiring, and dragged down further by the pedestrian art, primarily by Carlos Pino and José Luis Ferrer, but even British great Ian Kennedy doesn’t really impress. This bargain presentation muddies the art further by printing what was once colour in dull greytones. The best art in this section is from Dave Gibbons very early in his career.

Gibbons is also on hand for the better material, which coincides with the feature transferring to 2000AD. By this time the wrinkles had been worked out, and the ensemble cast Thunderbirds style rescue missions are initially sidelined in favour of spotlighting the two most popular characters Ro-Jaws and Hammerstein. Ro-Jaws was a coarse sewer droid with a big mouth, and Hammerstein was all that remained of the strip’s original military premise, an ex-combat droid. Mills returned to the writing, and we’re presented with extended looks into their pasts.

Now drawn for black and white publication, the art is clearly reproduced, and there are fine pages from Gibbons, O’Neill and Mike McMahon, but series workhorse Mike Dorey shouldn’t be overlooked. From the old school of British comics, and with a long career already behind him, he adapts well, particularly good with the imitation Dickensian settings for Ro-Jaws’ back story.

The story most fondly recalled is that of giant demolition droids going on the rampage and the town of Northpool being placed under threat. It’s a tense thriller in which Mills tugs at the heartstrings and Gibbons delivers more personality to a giant robot than you’d imagine possible. Both creators have a page here recalling their time on the feature.

Mills brings his run to an end with an extended plot of robots on the run, after the company owner plans to destroy them as a tax dodge. He’d become frustrated at being shackled by the basic premise, and instead created future war series ABC Warriors around Hammerstein, which itself morphed into weird and wonderful directions.

That wasn’t the end for Ro-Busters, though, as the feature returned in annuals and specials serving the purpose of a tryouts for creators new to 2000AD. None are particularly impressive, with the best of them an Alan Moore pastiche featuring Thunderbirds analogues and drawn by the obscure Joe Eckers. Steve Dillon and Bryan Talbot also illustrate Moore scripts early in their careers.

There are other thinner Ro-Busters collections more selective about their content, on better paper, and some in colour, with Disaster Squad of Distinction recommended as the one to have. This, though, is a good value package for ageing nostalgists, those who follow a variety of artists and the young boys that were originally the target audience for the strip. In the light of how 2000AD developed, however, most of it is probably not as good as you remember.