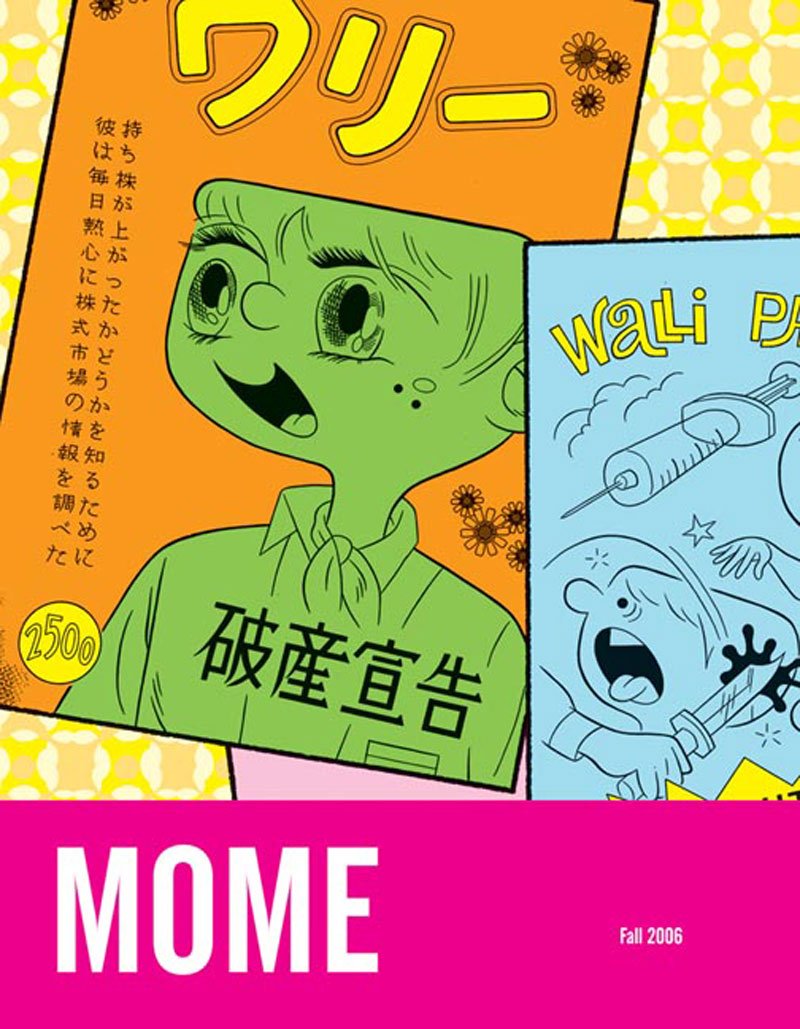 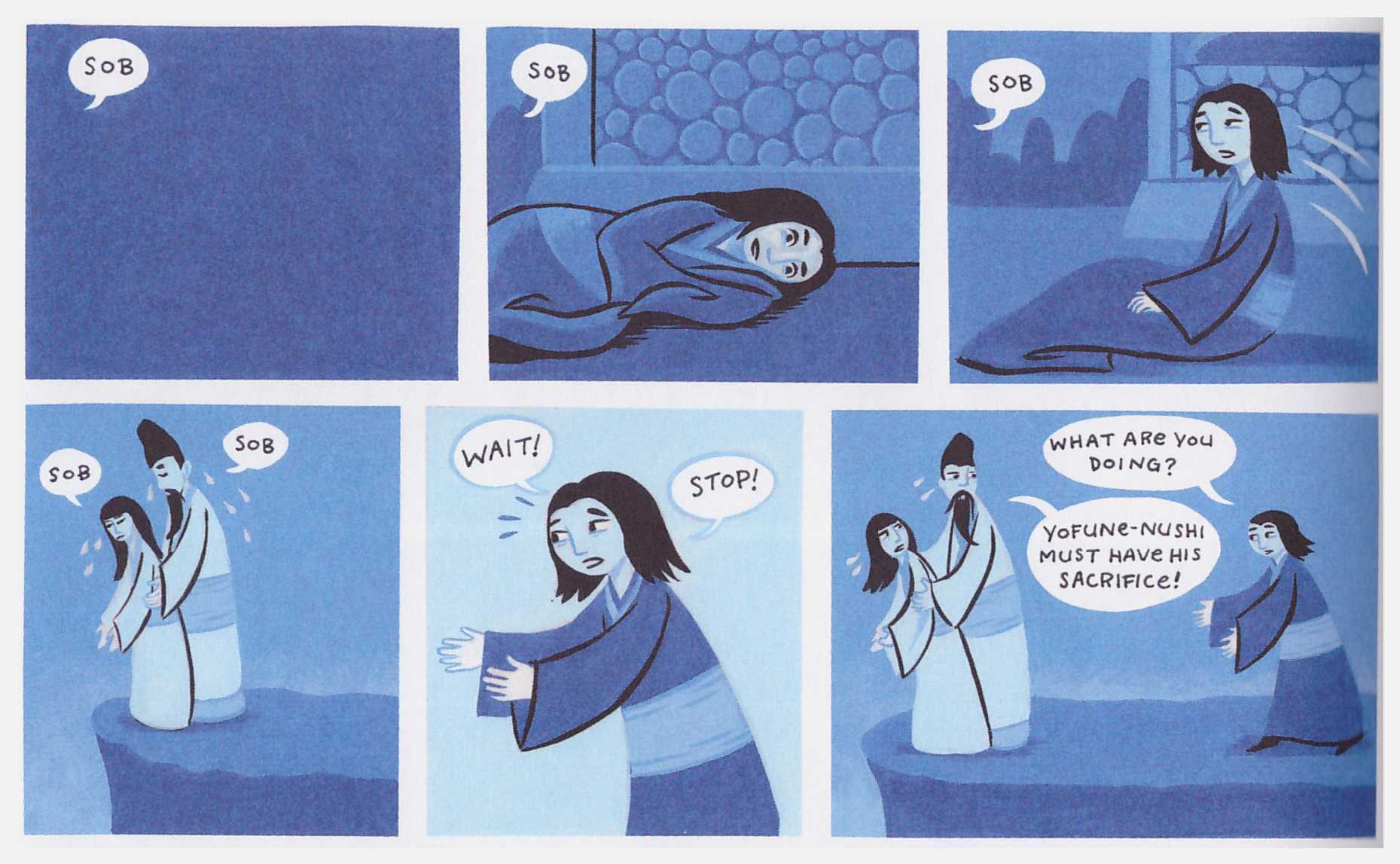 Sophie Crumb begins her longest Mome story so far  – ‘Lucid Nightmare’. A down on their luck young couple see a woman unconscious in the street. They steal her wallet and car, but feeling some guilt, they decide, rather than leave her in the street to take her with them. “Well… we couldn’t just leave you there to die… we’re not total dicks…” It’s in a new, very tonal style that looks like it’s photographed from the pencils, but is apparently biro pen. Her composition, figures and faces are a significant improvement on her previous stories.

In part four of Paul Hornschemeier’s ‘Life with Mr Dangerous’, Amy – we now know to be single and 27 – ruminates on her previous relationships and how they ended. As usual, it’s delivered in simple brush lines, and a subtle palette of flat colours, the autumnal shades here overlaid with night-time blues. The exception being the boyfriend flashbacks, which are in monochrome. It’s an engaging story well told, if somewhat indebted to Chris Ware.

In Anders Nilsen’s ‘Me and Buddha’ his narrator tells of an encounter with Buddha, and its escalating consequences. The drawing is minimal, little more than stick figures on a blank background, sometimes with little or no movement between panels. He also provides ‘Art History Notes/Hoax Paper’, just what it says: his notebook pages from art history lectures. It’s charming in parts. ‘The Event’ in Mome 2 was a highlight of the series to date, so he can do better.

Cover artist Tim Hensley has been represented by a few pages in earlier issues. Here, three interconnected pieces are part of a magnum opus. Wally Gropius – no not the one, he is tired of pointing out, from the seminal Bauhaus art school – is the heir to Gropius Petrochemical, a pampered Richie Rich and wannabe hipster. The butler announces the arrival of his Monkees styled band mates: “I’ve taken the liberty of abrading your new trousers at the knee. Would you care for me to pomade your hair into proper disarray?“ A downside of being the moneyed elite is marriage arranged for strategic purposes, and that’s what his father has in mind. It’s smartly drawn in a hipster cartoon style, and dense with wordplay and cultural references, but will there be depth under it’s well-polished surfaces? Future issues will tell.

The Mome debut of Robert Goodin is ‘Three Legged Myrna and Her Two Lovers’. It’s a more tender story than than the limerick title suggests, yet it lacks drama and conflict, although he’s a capable artist rendering mildly exaggerated faces and figures. It all looks rather pale, though. It may have been photographed from pencil – always tricky.

Gabrielle Bell’s ‘California Diary’ records a trip to attend a comic convention and visit family. It’s interesting, but a more casual piece than her previous stories.

Having provided short conversational pieces in earlier issues, Kurt Wolfgang begins a longer story, ‘Nothing Eve’. It’s a promising premise – last day before the world ends, and should be a good arena for the cynical frustrated world-view of his characters so far. Will they savour some life before they die?

As before, there’s interesting work here. Everything is worth reading, but there’s not a single five star contribution. 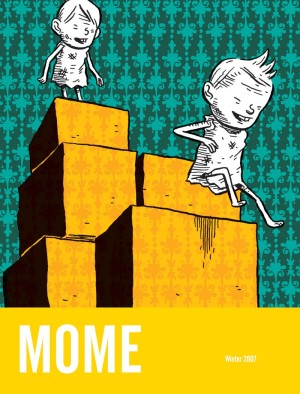 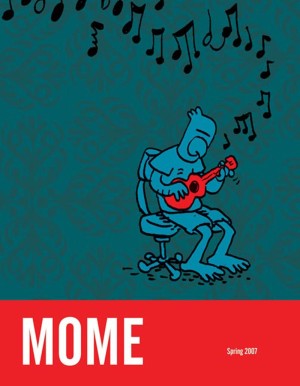 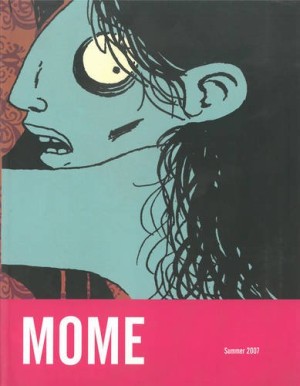