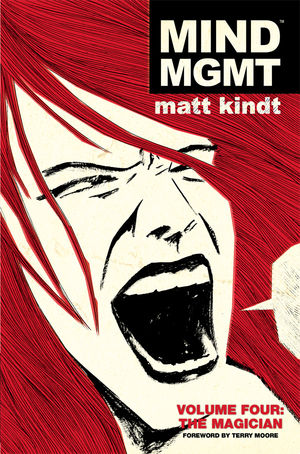 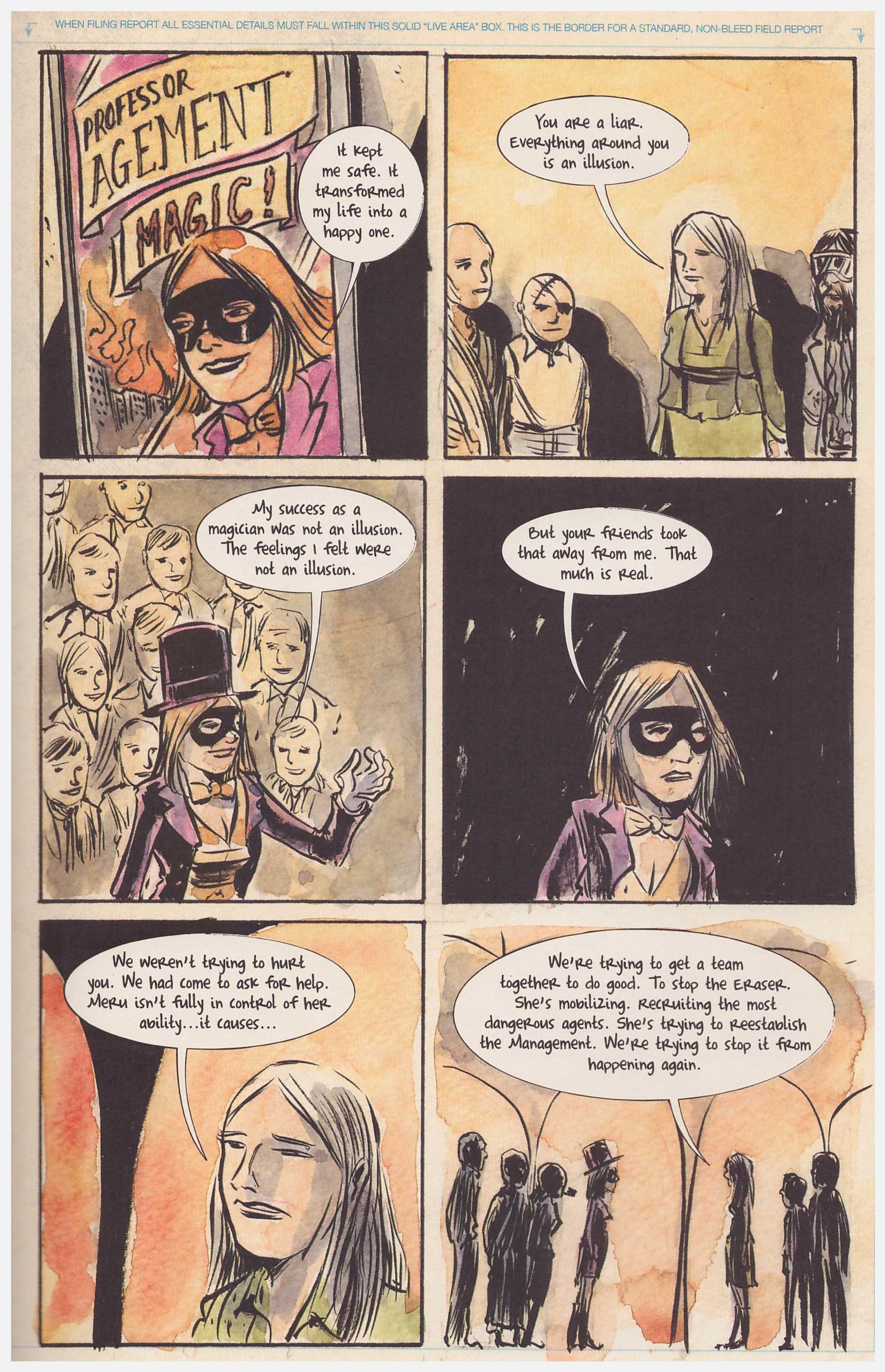 Brian Michael Bendis (who provided an introduction to volume three), Ed Brubaker, Jonathan Hickman, Alan Moore, Grant Morrison and James Robinson are all acclaimed graphic novel writers who began by also drawing their material. In some cases their earliest works are still available, in some they dropped the art before beginning their true careers, each coming to recognise their strength was their imagination, and the illustration was better left to more skilled artists. We can only imagine what Mind MGMT might look like if Kindt had reached the same conclusion. Just running the eye over his pages reveals a good sense of layouts, especially with four simultaneous narratives occupying much of the first chapter. However, looking more closely at his sketchy style discloses how everything disintegrates as soon as a human being is involved. Even accounting for each artist having their distinctive style Kindt’s cast look wrong.

The great pity of that is Kindt the writer is very good indeed, as he has been throughout, and more people would know that if Mind MGMT looked polished.

The Home Maker set Meru on a course, and the opening focus of this book is an attempt by her and her associates to persuade another former Mind MGMT agent of the danger faced if the organisation is reconvened. More so than even previous volumes, The Magician deals with deceit, deception and the manipulation of reality, at which the Magician herself is adept, but she’s not happy at the intrusion into her world. “Spent years building up a new life. But when they want something they just show up and wreck it all”. It’s Kindt’s version of the hoary old cliché of a misunderstanding between well intentioned superheroes, and he gives it a thorough twist. What results is the first all-out confrontations between the agents Henry Lyme has gathered and those who’ve thrown their lot in with the Eraser. Were the sequences better drawn they’d number among the most novel in the history of super-powered fight scenes as the ability to cancel or predict is set up again those unable to fail.

As much as anything can be believed in the world of Mind MGMT, there are considerable cast changes in this volume, and Kindt is becoming more experimental with his storytelling, from the opening chapter, to one related entirely in fragmentary thought balloons. The overall effect, though, is to remove any consistency. This is a very bitty selection of material, jumping back and forth as we learn about new characters being introduced, closing with a run through of Henry Lyme’s past. It also serves as a contracted version of what we learned throughout, as Mind MGMT began.

Despite an excellent opening chapter, The Magician is a slight dip in form, the lack of a connecting thread impacting, as the does the lack of any kind of even temporary resolution. The value of the stakes and some good surprises ensure there’s enough worthwhile content to keep regular readers happy, and that’s what’s essential as the only real place to pick up the series is with the first book. Next up is The Eraser. 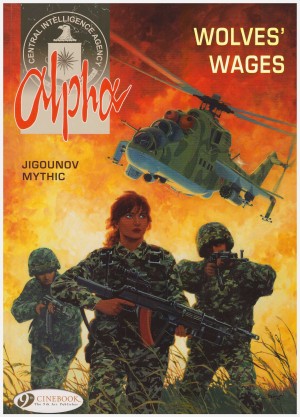