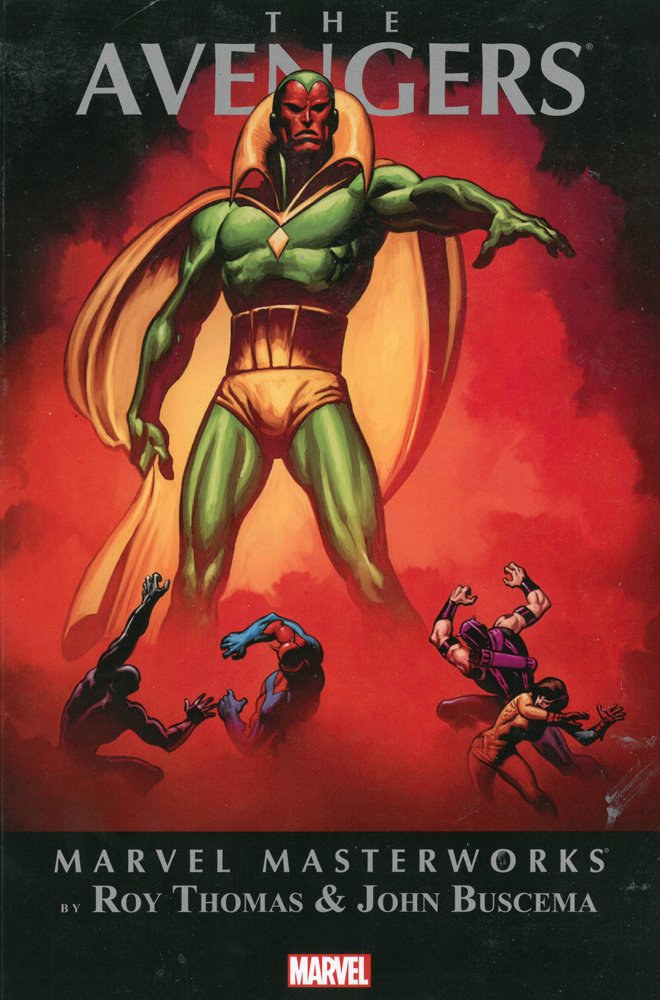 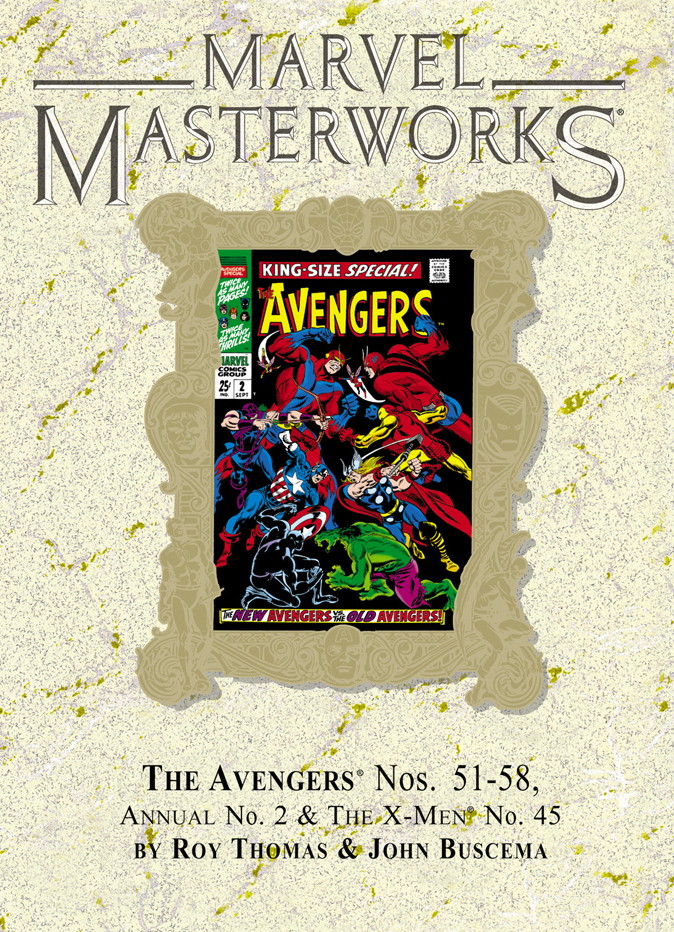 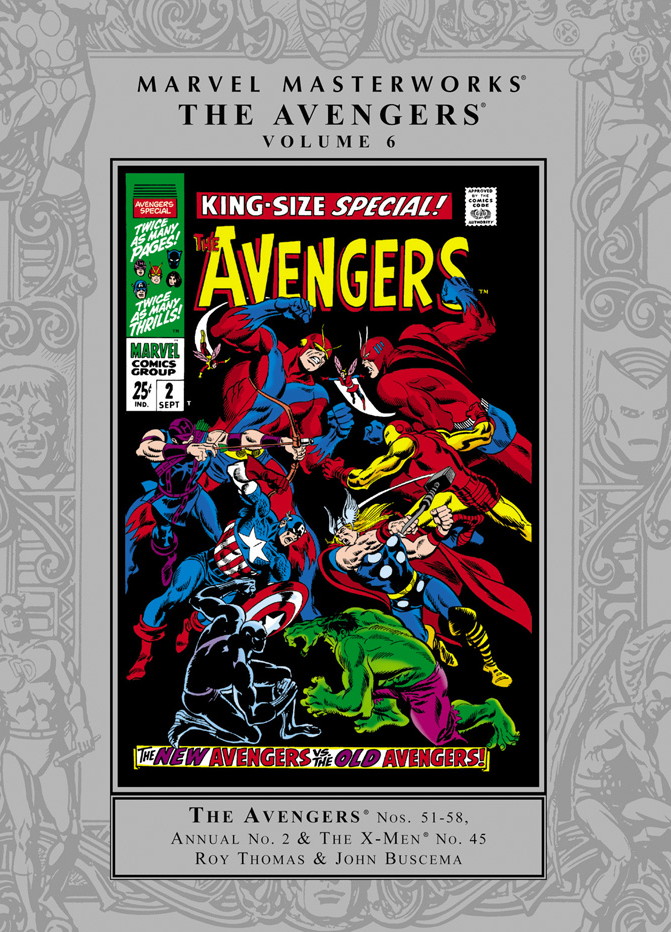 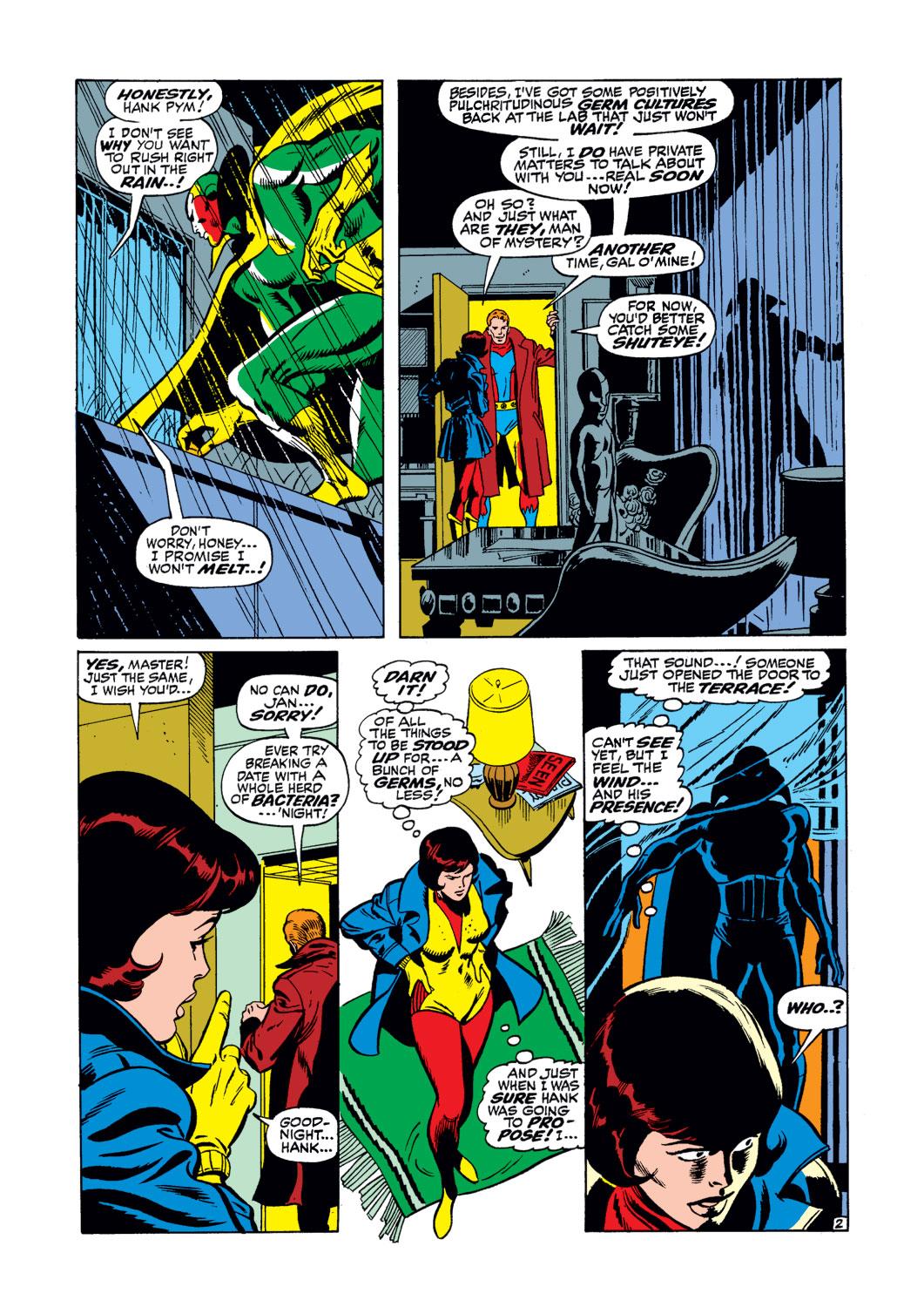 While still not there yet, with this third collection of Roy Thomas’ writing on The Avengers the glimmers of what was to come are shining through. He always had the imagination, but is now plotting his stories more efficiently and there’s far less clutter about John Buscema’s art.

Thomas’ introduction is honest about the varying quality of the inkers used on Buscema’s pencils, with George Tuska and Vince Colletta less than ideal, but George Klein really works, and Buscema achieves an eerie other-worldliness in his depiction of the Vision floating through the city at night. He’s also great on a short parody feature, which was a rare foray into Mad-style cartooning.

Inducting the Black Panther as an Avenger was an admirably pro-active attempt to broaden the team’s social dynamics, and further marks the first appearance of a mainstay villain the Grim Reaper. He’s inexplicably drawn as cross-eyed, and his odd costume would be redesigned. There’s an interesting mystery at the story’s core, but it’s otherwise ordinary, as is a crossover with the X-Men in which Quicksilver and the Scarlet Witch make a rapid reappearance.

The quality curve is upward from that point, with Thomas efficiently introducing his always good ideas more smoothly into the plots. His introduction is honest enough to acknowledge a couple of mis-steps, and while time has seeped the tension and surprise from the appearance of a robotic villain as he reconvenes the Masters of Evil, the basic story’s good.

Under instructions not to feature headliners Captain America, Iron Man and Thor, Thomas conceived ways around this, and at least one of them features in more issues than not. As was the case in the previous volume the highlight is an annual, in which the current Avengers meet their founding counterparts, who don’t appear to recognise them. Thomas deftly deals with time travel amid an ambitious plot, the greatest shame of which is that it’s not illustrated by Buscema, but the lesser lights of Don Heck and Werner Roth.

This volume closes with what are considered Thomas’ finest early moments on the Avengers, as he introduces artificial human the Vision and uncloaks robotic menace Ultron. Both would become integral to the series, and their personalities are pretty much what ended up on the cinema screens in the second Avengers movie. The issue introducing the Vision has fantastic art from Buscema, the plot is unpredictable, and it leads to an audacious ending as Thomas and Buscema contrast Ultron’s fate with appropriate lines from Ozymandias regarding hubris. The conclusion is nowhere near as good, and the dramatic intent of a famous scene of the Vision shedding a tear has been lost in time. “And yet if you saw his eyes right now,” emotes Goliath, “I’m sure you’d learn that even an android can cry!”

However it might read all these years later, it’s indicative of a writer attempting something new, even if it didn’t always come off, and as a collection these are better Avengers comics than any of the preceding Masterworks. They’re also available with much other content in the cheaper, black and white, Essential Avengers 3, or in colour spread over the Epic Collections Masters of Evil and Behold… The Vision.