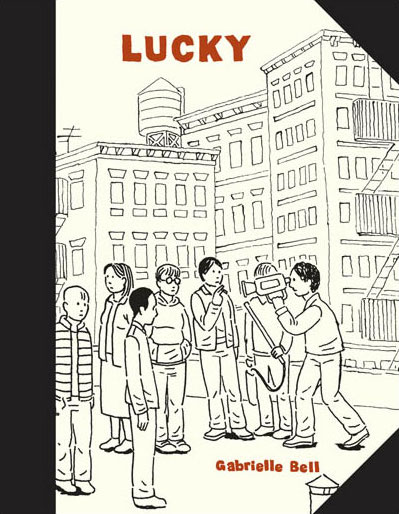 Autobiographical graphic novels have become a genre as predictable as superheroes, and in some ways equally confining. It’s the biggest irony of many that self-expression seems to come packaged in near-identical ways. The number of creators who have something to say about their personal lives and can express it without leaning on misanthropy and the usual ‘miserable outsider/introverted geek’ stereotypes are few. Good news, readers: Gabrielle Bell is one of those few. She matches the personality profile for most comics diarists: painfully self-conscious, obsessive about small details, uncomfortable with crowds, her relationships made complicated by bundles of neuroses, constantly broke and looking for a job. However, she has something they don’t, a subtle and intriguing way of shaping the annoying minutiae of her daily life into funny and curious episodes.

Lucky is a collection made of chapters from the self-published diary comics of the same name that Bell began making in 2003 after she moved to Brooklyn, New York, into a precarious existence of short-term jobs and short-term leases on apartments that kept her constantly worrying about money. In the introduction, she explains how she began realising that she could do more with her comics than simply recount the events of a day, and began crafting the pages into little short stories that reflected whatever was on her mind at the time. Putting more of her inner self into these observations was embarrassing, but the positive reactions from friends overcame her fears of exposure. After winning an Ignatz Award, parts of Lucky were reprinted in a translated French edition before this collection in 2006.

Bell’s soft line has a child-like quality to it, something to do with the way she draws everyone with simple, open faces on slightly doll-like bodies, and uses black sparingly most of the time. Combined with a slight wobbliness to her lines it doesn’t take much of a push to float her stories out of everyday reality into dreams and fantasy interludes. Her special trick is to slide those dreamlike intrusions in so gently that it can take you awhile to notice the things she is showing you are implausible, but they are entertaining enough that you’re happy to believe them. Lucky is the first collection of Gabrielle Bell’s comics, and it doesn’t have the polish or the intricate constructions of her later books such as The Voyeurs and Everything is Flammable but it’s gently amusing and very easy to keep reading till you suddenly notice you’ve come to the end of the book.