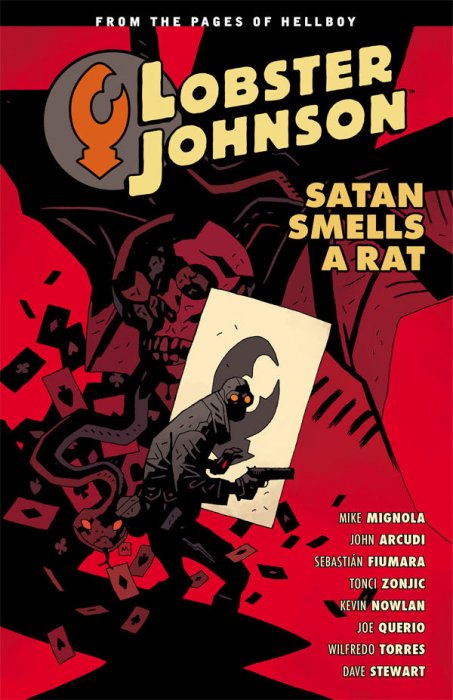 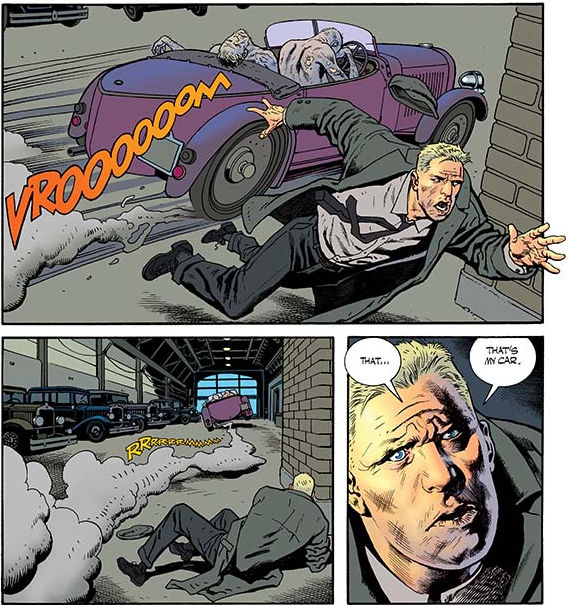 “Justice will not wait” spouts Lobster Johnson at one point, the nearest he approaches a reader-friendly catchphrase, and he’s portrayed in full kinetic blur mode in these tales of the early 1930s. The previous two Lobster Johnson volumes presented full-length stories, but Satan Smells a Rat is an anthology taking it’s title from a tale within.

Let’s start there, as any story illustrated by Kevin Nowlan is both rare and desirable. There are some other immensely talented artists within this book, but they all swim in the slipstream of Nowlan’s delicately expressive rendering and superb composition. The tale he illustrates is one of the slimmer here, of callous scientific experimentation, but looks beautiful.

Scientific experimentation is also paramount as the illustrator of The Burning Hand, Tonči Zonjić brings his fine classic newspaper strip sensibilities to bear on ‘Caput Mortuum’. It’s a fun tale of Lobster rampaging through a Zeppelin dealing with Nazis intending to unleash a hell on New York.

The manner in which writers Mike Mignola and John Arcudi characterise Lobster is as almost a force of nature for whom two fists and a revolver are the answer to all problems, and nowhere is this clearer than the final tale. ‘The Prayer of Neferu’ has him blundering into mystical events beyond his knowledge and control, yet finding no need to adapt, and eventually coming through by sheer luck. Wilfredo Torres illustrates this in a cartoon action style.

It falls to another great artistic find Sebastián Fiumara to draw the longest story on offer here, in which funding Chinese rebels in the puppet regime of Manchukuo provides the backdrop. There’s a greater spotlight shed on Lobster’s helpers and Detective Jake Eckerd is becoming frustrated at Lobsters success rate and outlaw status. Hints are dropped as to his background, but that has to wait until the next volume, Get the Lobster, for a full airing.

We move directly into B.P.R.D. territory for the shortest contribution as a gangster on Lobster’s hit list acquires the power to fend him off. Joe Quero illustrates ‘Tony Masso’s Finest Hour’ in suitable style.

There’s a lot of fun to be had here, but it’s an uneven volume overall.