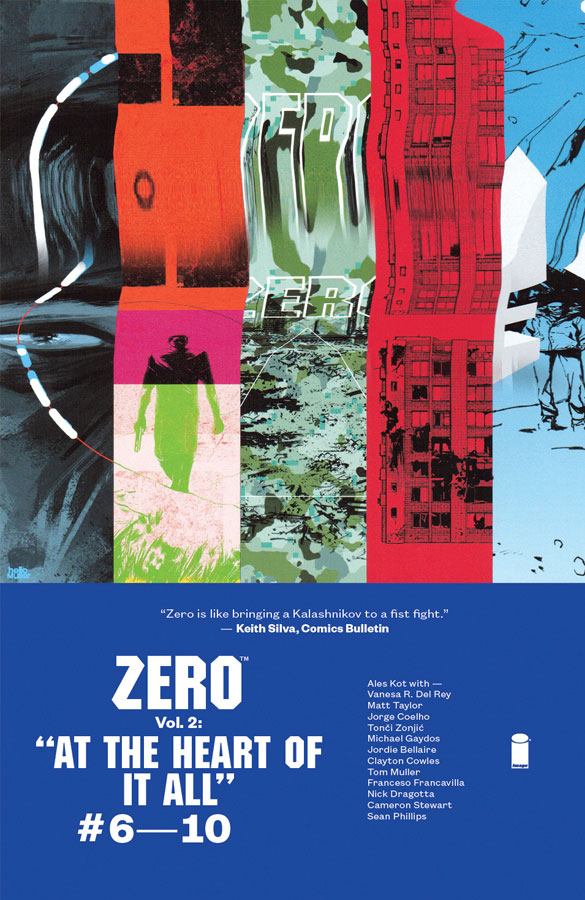 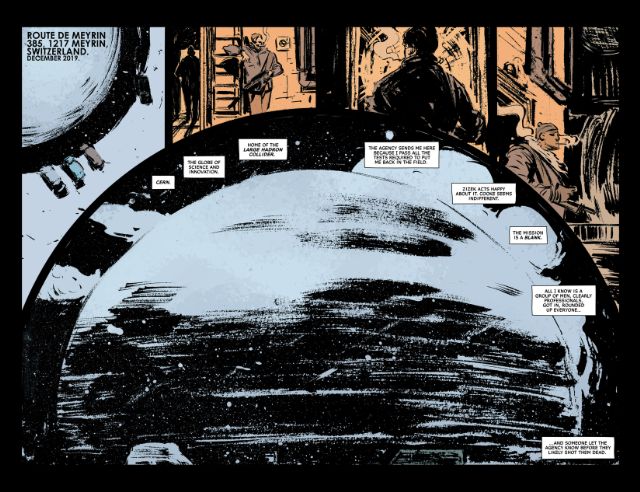 At the Heart of It All continues the format of An Emergency, weaving together an intricate, non-linear patchwork narrative, the fragmented storytelling fitting the pieces of the jigsaw together at its own, unhurried pace. The subtitle reflects the focus on the relationships, the hearts, of the key players in the story. We become privy to the loss and pain that exists in each character’s life, which adds depth and empathy to the characterisation.

Though this is still the story of Edward Zero’s defection from his life of spying and assassination, Aleš Kot has worked well in humanising Zero’s ringmasters, Roman Zizek, his handler and father figure, and Sarah Cooke, Zizek’s superior and Zero’s overall boss. The first book made it evident that these two have a more complex relationship than mere work colleagues, and here there’s a greater insight into the complexity of their confused, loving, yet conflicted interactions. How the relationship twists and plays out adds a fascinating layer to the story and to Zero’s loyalties.

Ultimately, this is still the story of Edward Zero and his alienation from the secret agent world that he had been programmed and conditioned to inhabit from childhood. He remains the enigma at the heart of the action, and Kot is unafraid to present long passages where Zero does not speak at all. However, the array of talented artists who worked on this book, guided by Kot, render these pages so expressive and textured that the pictures suggest a thousand words and more. The reader is invited to intuit how the emotional crises and conflicts the character is undergoing shape his internal life and reshape his humanity as he tries to understand himself.

There is no lazy storytelling here – the creators are never patronising and expect you to work for your reward. It is well worth the effort. The artists selected to tell the tale, from Vanesa Del Ray who opens the book to Michael Gaydos who closes it, are all at the top of their game. The artistic experimentation may prove divisive: many readers will love the way each standalone chapter and story fragment is given a unique identity by the ever shifting artistry; others may find this to be a frustrating and unnecessary gimmick. Ultimately, Jordie Bellaire’s terrific colours, as with the first book, are the glue to hold it all together and provide a consistent tone to the work.

At the Heart of It All may explore relationships, but this never prevents the storytelling from being wonderfully kinetic and thrilling. Zero has been hailed in some quarters as a work of potential genius and, while this is hyperbolic, the book has real virtues. Ales Kot is swimming in a genre which can often sink under the weight of its own clichés, but he provides the reader with a vital, fresh and, most importantly, entertaining experience. The next volume is Tenderness of Wolves.