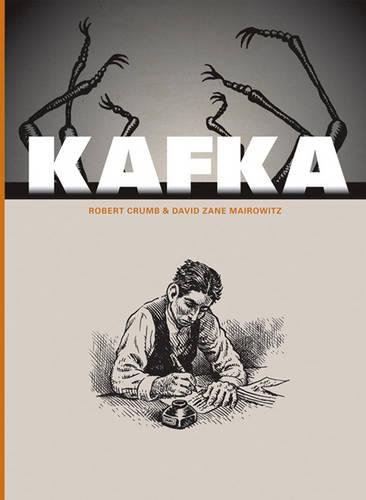 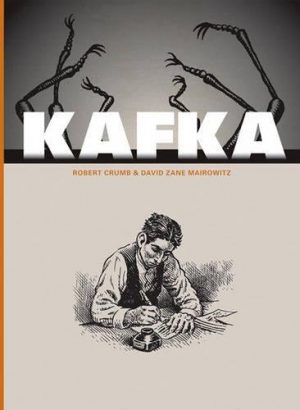 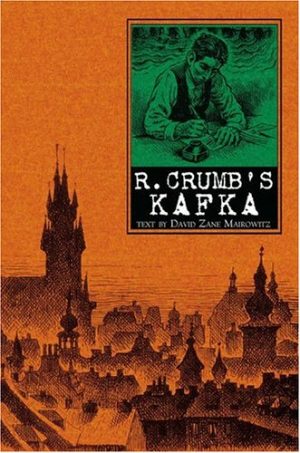 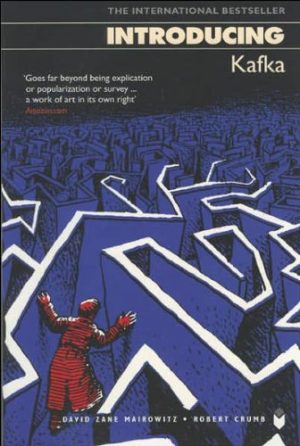 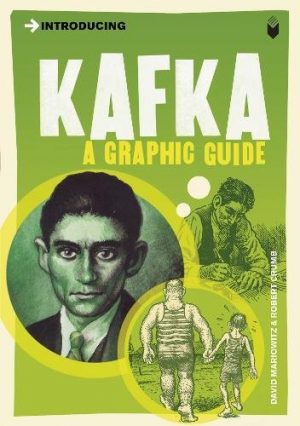 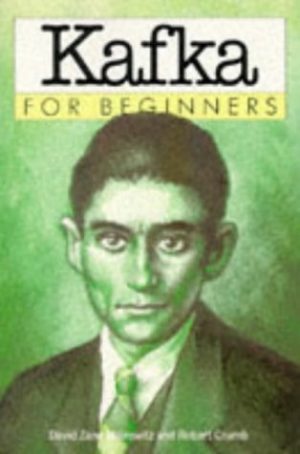 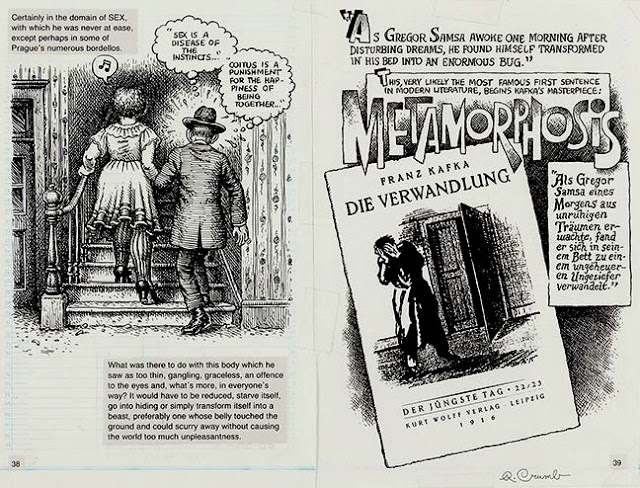 Now redesigned and sensibly marketed by Fantagraphics as a Robert Crumb book, Kafka, began life as Kafka for Beginners, and it’s helpful to see it in that context.

The ‘For Beginners’ series, provided accessible primers on key thinkers like Freud and Plato, and topics from Evolution to Post-Modernism. Aimed at students and self-improving readers rather than comics connoisseurs, they sold on the subject rather than the creators. The ‘pocket book’ format also literally cramped artists’ style, limiting page design. Kafka for Beginners, though, stood out in being illustrated by bona-fide comics legend Crumb, and for incorporating into David Zane Mairowitz’s profile of the Czech master, some adaptations of his short stories.

It begins with a hairy hand wielding a meat cleaver that’s chopping slices from the head of Franz Kafka, who reacts with only slight perplexity. The Kafka quote that prompted the image, is lettered by Crumb, on an appropriately mutilated scrap of paper, yet given gravitas by a suitably gothic enlarged initial extending off the paper. Kafka, Mairowitz tells us, “imagined his own extinction by dozens of carefully elaborated methods”. It’s a suitably arresting start to the book, that also fulfils the brief of drawing the reader in to the story of this most complex of personalities.

Franz Kafka is one of the most acclaimed writers of the 20th Century, his nightmare visions of incomprehensible regimes and intractable bureaucracy, having even given rise to an adjective: Kafkaesque. Mairowitz quickly locates the origins of his subject’s alienation from self and surroundings, in his formative environment. Kafka’s parents were assimilated Jews in Prague, then part of the vast Austrian-Hungarian empire, and Franz grew up in the city’s Josefov ghetto. Not actively religious, Mairowitz convincingly explains how Kafka was nonetheless embedded in Jewish culture, while internalising the growing anti-semitism around him. In particular, he convincingly locates the author’s absurd and grotesque fantasies, in the esoteric fringes of Jewish culture, such as the Kabbala, and young Franz’s inspiration from a touring Yiddish theatre troupe.

The brevity of much of Kafka’s fiction means adaptations can be strategically inserted and contextualised within Mairowitz’s argument. For example, after identifying Kafka’s alienation from his own body, we see this idea dramatised as a young man finds himself transformed into a giant ‘vermin’. This of course is Kafka’s famous novella The Metamorphosis, included here in a complete, albeit summarised, adaptation. Crumb is no stranger to depicting altered consciousness and here captures something of the transition to insects-eye-view, and release from human gravity, with his angled, irregular and overlapping panels. His typically obsessive rendering lends itself to the recoil-inducing cringe required here.

Mairowitz gives us the highlights (lowlights?) of Kafka’s life, from birth to death, taking in his most important works, and painting a picture of the context before and after, in the latter case taking us up to to the present day (i.e. 1990s), and the rise of Kafka’s Prague as a tourist destination – in Crumb’s rendition complete with ‘Ghetto Pizza’ and ‘Kafkateria Buffet’. In terms of the original brief as a Beginners’ Guide it’s hard to fault. Crumb illustrates this with his usual wit and style, and pages to equal his best. Yet for comics connoiseurs, the format makes it a frustrating read: the pocketbook size limits page layouts, and with the series’ typical typeset text it’s more like an heavily illustrated book than a true comic.

The same content is available in English under no less than five different titles and covers. If you don’t need to have the current Fantagraphics edition (main cover image), you may find a bargain.