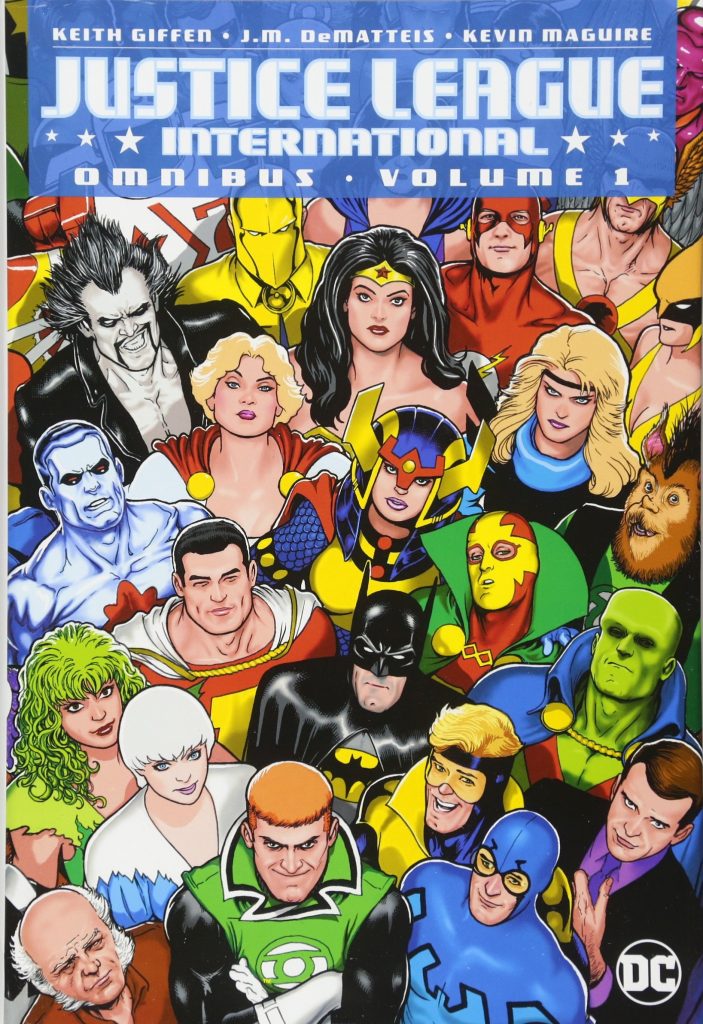 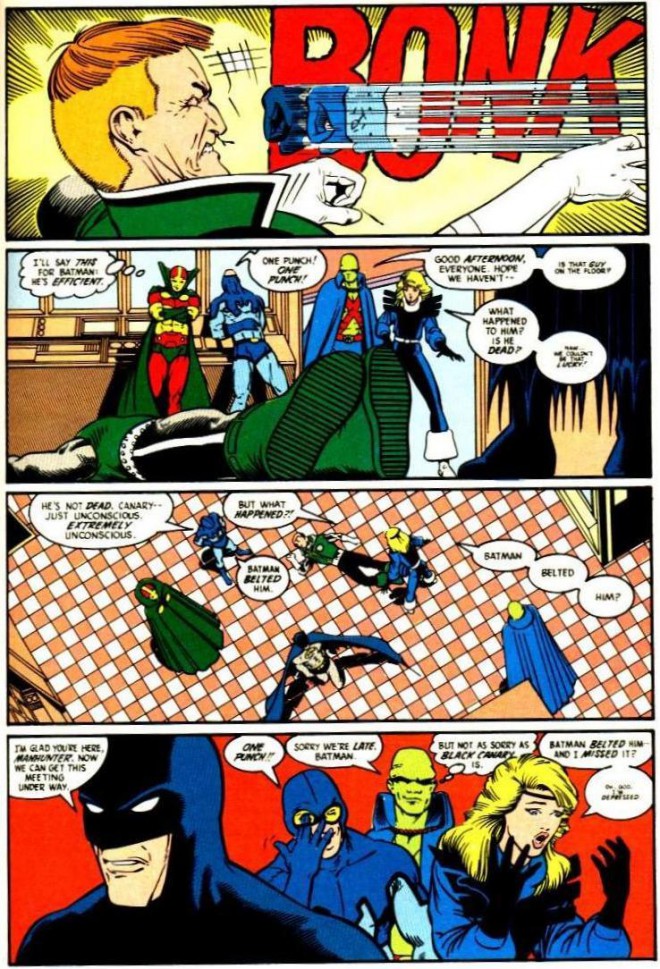 Beginning in 1987 the writing team of Keith Giffen (plot) and J.M. DeMatteis (dialogue) reinvented the Justice League as a smart superhero sitcom. It was an audacious revision, featuring a group of characters designed to grate on each other. Blue Beetle was trivial; Green Lantern Guy Gardner a bully; Batman efficient and intimidating; Fire glamorous and not to be messed with; Booster Gold very mercenary; Captain Marvel the innocent, a position later taken by Ice; Rocket Red deliberately played against dour Russian type; and Mister Miracle genial enough to rub along with almost anything. The whole crew is marshalled by the manipulative Maxwell Lord and the long-suffering Martian Manhunter, who develops an Oreo cookie addiction. Their foes were slightly more serious, even if time was found for a gloriously pompous galactic trader. The successful formula was then applied equally well to a group of characters based in France as the Justice League’s European branch. The results aren’t all solid gold, but the majority still holds up very well, with the comedy flowing and the superheroics still interesting.

Starting with Kevin Maguire, then moving to Ty Templeton followed by Adam Hughes with occasional Bill Willingham and Mike McKone episodes, much of the art is excellent, featuring expressive characters, first rate storytelling, and the comedy not over-baked. Over the final third there’s also the involvement of Bart Sears illustrating the Justice League Europe episodes, and he’s an acquired taste. His characters all seem forced into the panels, his facial expressions are sometimes plain ugly, and his figures suspect. Much of the work that hasn’t previously seen print in graphic novels is that of Hughes, who reportedly wasn’t too enamoured of the comedy tone. You’d not know it from such gems as the carnage caused by an idiot who wins the power devices of assorted villains in a poker game. Guy Gardner’s date night is hilarious, but with weaker art, which applies to most of the Justice League Europe content even when not drawn by Sears, Chris Sprouse being an exception.

William Messner-Loebs and Gerard Jones provide the dialogue for most of that, with Messner-Loebs matching DeMatteis for comedy timing, and Jones a little less instinctively funny, although by no means poor. More detailed reviews of the earlier content can be found over the individual paperbacks beginning here.

Are there are any extras beyond Maguire’s great wraparound cover. Well, not much beyond the contemporary entries for the characters from DC’s Who’s Who encyclopedia project and some illustrations by Maguire for fanzines and promotional publications. In production terms, DC’s binding problems have been solved. There’s not a page here that disappears into the centre gutter.

There’s some annoyance on forums that DC first discontinued the hardcover reprints of Giffen and DeMatteis’ 1980s Justice League work, then three volumes later stopped the paperback publications also. Instead of having the second half of their run available in more affordable format, there’s a been a gap of a few years, and in 2017 the content of those first six volumes of Justice League International are presented again in this oversize Omnibus. The smell of exploitation is rank, but it would seem that this and a possible sequel covering the remainder of Giffen and DeMatteis’ work are the only book options for the foreseeable future.