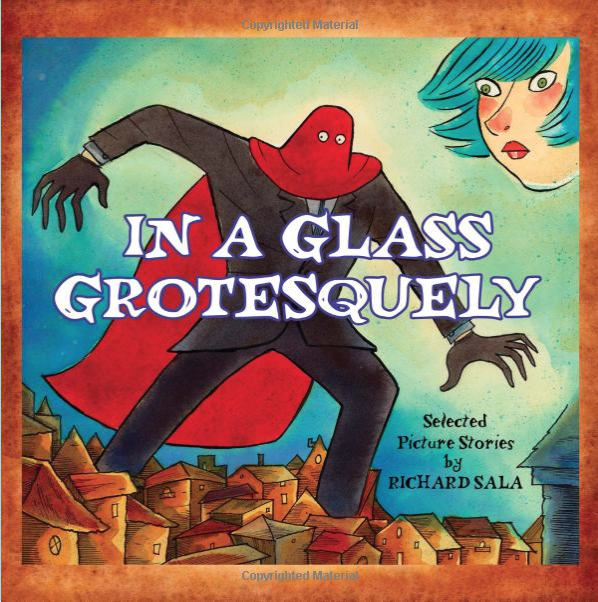 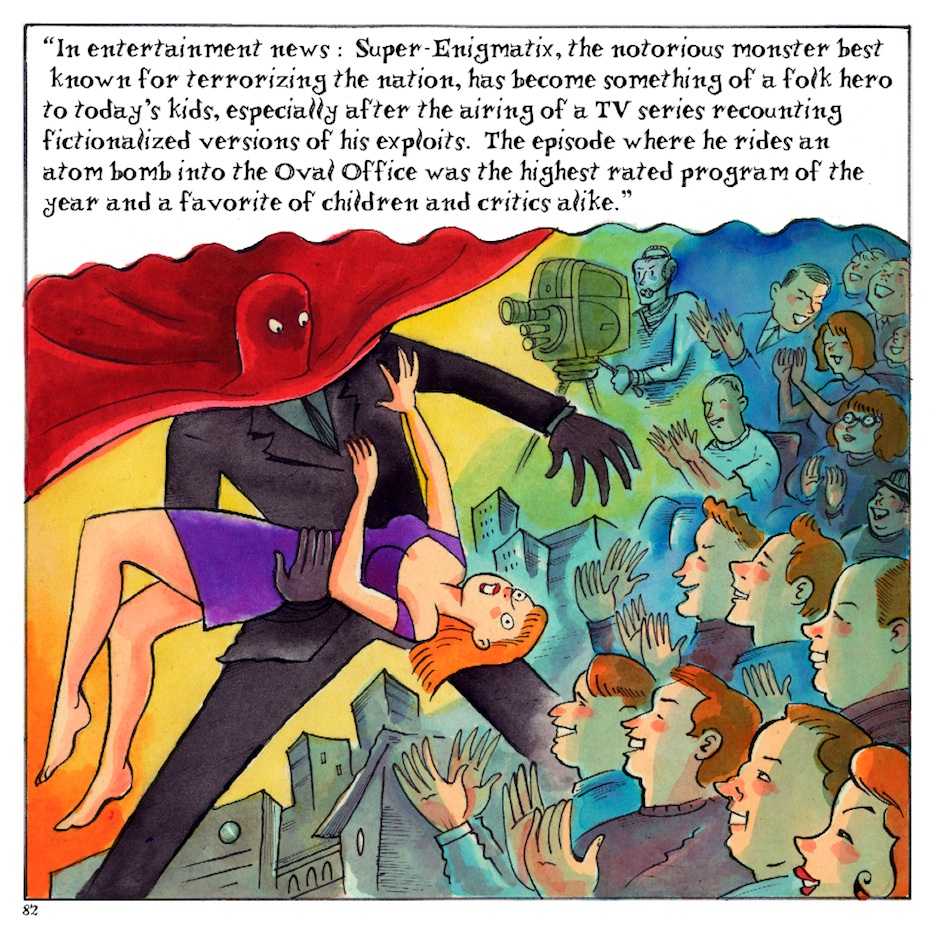 In a Glass Grotesquely collects Richard Sala’s web comic ‘Super-Enigmatix’. Conceived as a serial, with each page teasing the next, it holds up well collected as a graphic novel.

It opens with a gothic street amidst the skyscrapers, and the classic sound effects like “Creak”. We see a young woman in the shadows behind an old man at his fireside, “Come in,” he says “I’ve been expecting you.” Turn the page though, and the girl, stepping out the shadows, retorts: “Naturally, since I just called to tell you I was on my way over.” This is Sala signalling his mischievous mocking of genre conventions.

We’re in the home of retired Inspector Jory, who is trying to convince young detective Natalie Charms that there are hidden connections between seemingly random events. He stretches her credulity even further when he suggests it’s all the work of the unknown Super-Enigmatix. Who? He is, Jory tells us “everyone and no-one” with a single goal – to create chaos. Yet Charms can’t stop seeing these connections too, and together they set about telling a sceptical world of this threat to them. However, rather than force their adversary into hiding, this prompts him to step up his plans and go public.

Sala has created a niche for himself with a series of entertaining and stylish books of post-modern pulp and gothic. It’s relevant to know that he caught many people’s eye in Spiegelman and Mouly’s Raw anthology. In common with other Raw artists like Charles Burns, he combines a genuine and deep love of popular culture, with a critical, ironic, and (politically) liberal twist on it. Where Burns drew on pulp comics and sci-fi, Sala draws on older gothic traditions, filtered through Edward Gorey, and (in this case) matinee serials. He also acknowledges classic master villains Fu Manchu, Fantômas, and Dr Mabuse – through their posthumous endorsements on the cover.

It’s an enjoyable romp, and Sala delights in concocting Enigmatix’ machiavellian schemes. He threatens four cities with destruction, unless… they kill their mayor first. Still there are serious themes at play here, in particular, the ways public opinion and reaction is shaped by unseen forces. This is how Enigmatix is “everyone and no-one.” Sala’s never dull, or preachy though – we hear most of this analysis from Gillian, the villain’s right-hand woman, in some visually entertaining scenes as she woos and drugs unworldly journalist David.

Trained as a painter, Sala’s apparently simple drawings belie his skill. He brings an elegant mastery of composition, body-language and movement to these often crowded action scenes. His characters also ‘act’ the story well – their simply cartooned faces capturing a range of emotions. Given it’s an ironic melodrama, the over-acting is pitch-perfect.

Also included are a few other shorts that fit these small, square pages. These are more psychological and intense, and highlight his brilliant pen work, which channels old master engravings – a style also associated with gothic fiction.

For the main story, he minimises the inking to let the colour do its job. The watercolour style is a good choice, and he uses a rich autumnal palette that adds mood to the settings, and coherence to the action scenes.

This is all suitable for children though (about ten upwards?) – they’ll enjoy the adventure and mild horror, while adults will appreciate the wry humour, ironic twists, and political satire.

‘Super-Enigmatix’ does reflect it’s serial origins, as a few elements come in then disappear, but most readers will be swept along by it’s joyful energy.