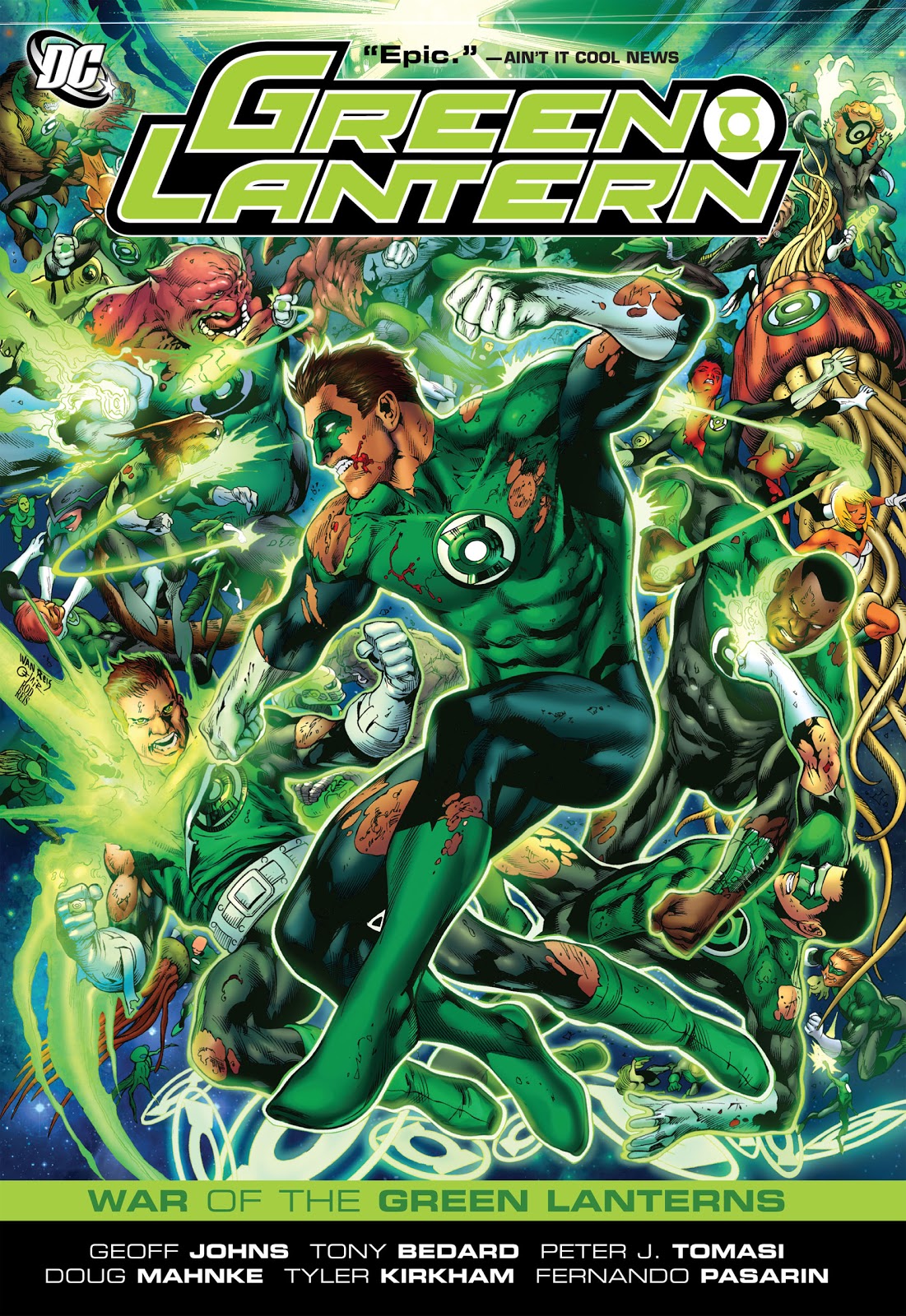 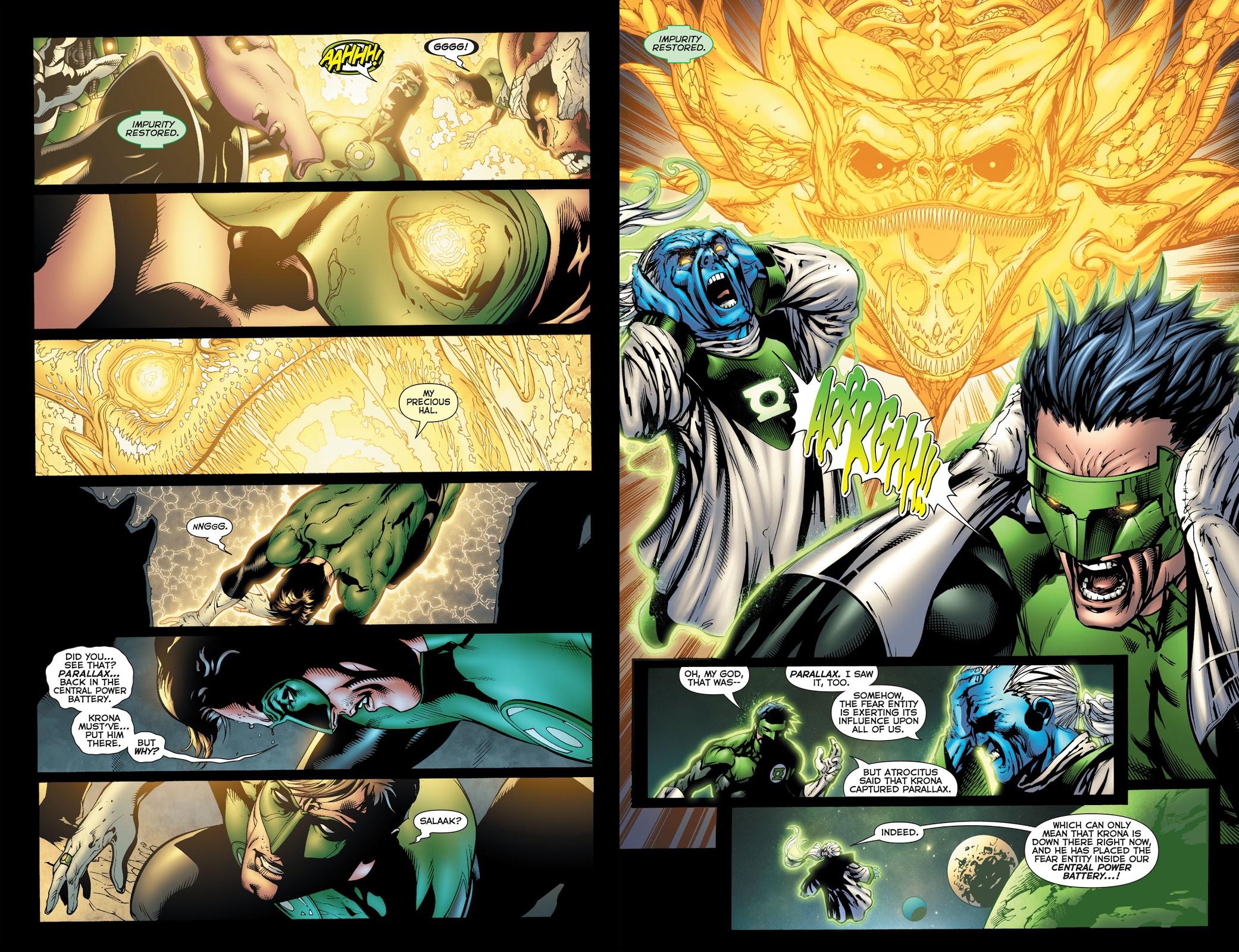 Throughout his long Green Lantern run Geoff Johns twisted stories around established Green Lantern lore, tinkering here and there with a character or event to suit his wider needs. War of the Green Lanterns is Johns, in the company of Tony Bedard and Peter J. Tomasi, addressing a plot he’s had on the boil for some while. Continuing from Brightest Day, we’re led to consider how far the Guardians of the Universe have been compromised, overlooking atrocities in the name of the better good. They’ve certainly become increasingly authoritarian, keeping much about their past concealed, and the current result of their secrecy has been that entities representing the core of various emotions are under the control of their greatest enemy. Their primary concern, though, is to arrest Hal Jordan for working with the bearers of other rings on the emotional spectrum.

At this stage Johns has sacrificed accessibility for new readers to the cause of thrilling those already in place. That equally applies to Bedard and Tomasi, responsible for the concluding chapters of Emerald Warriors, continuing from volume one, and the penultimate Green Lantern Corps material, continuing from The Weaponeer. On the other hand, there is a simplification, as for all the backstory unravelling, it’s the four human Green Lanterns who form the core, and a clever twist has them having to master the unfamiliar. As it’s Hal who Johns has spent the most time refining, he’s treated to some great moments. Possibly the best of them occurs relatively early as it’s again reinforced what a pilot he is, although right at the end there’s also a good Kyle Rayner moment, if self-mythologisingly indulgent.

Primary artists Tyler Kirkham (sample spread left), Doug Mahnke (sample spread right) and Fernando Pasarin all work in a broad superhero style, with Kirkham less efficient with his layouts, but equally good when it comes to the spectacular image. There are plenty of these, ranging from several of the massed Green Lanterns to Pasrarin’s amazing view of the core Green Lantern battery’s internal workings. As War of the Green Lanterns exploits colours associated with emotions, it’s important the artists keep in mind what the colourists have to do. Too much green and purple side by side won’t go easy on the eye, and until the final chapter colour overload is avoided.

The writers keep the momentum going via one desperate situation following another with the curtain never dissolving to reveal events as planned, and even warned in advance the ending will still be a real hammer blow with some fabulously appropriate dialogue. However, Johns’ Green Lantern has been one universe threatening epic after another, and while coming across with a couple of surprises, there are only so many times the crisis can be ramped up to eleven without overload. Unlike his earlier Green Lantern graphic novels, Johns doesn’t make any fundamental change, nor, ending apart, are the surprises major, just clever story twists, so while this is good, it plays to a repeated formula. War of the Green Lanterns: Aftermath provides the epilogue before DC’s “New 52” reboot. However, unlike most other titles, this wasn’t a fresh start, as Johns and Mahnke just continue with Sinestro.