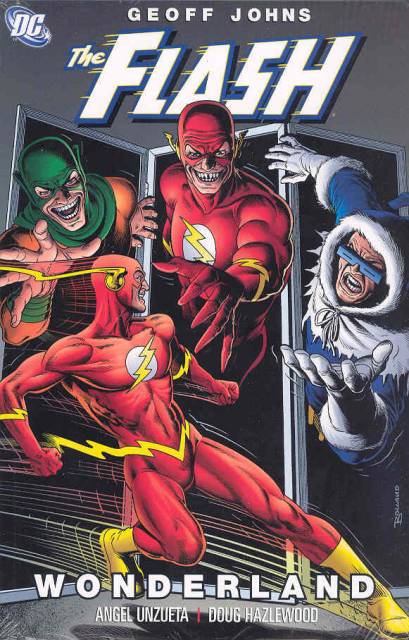 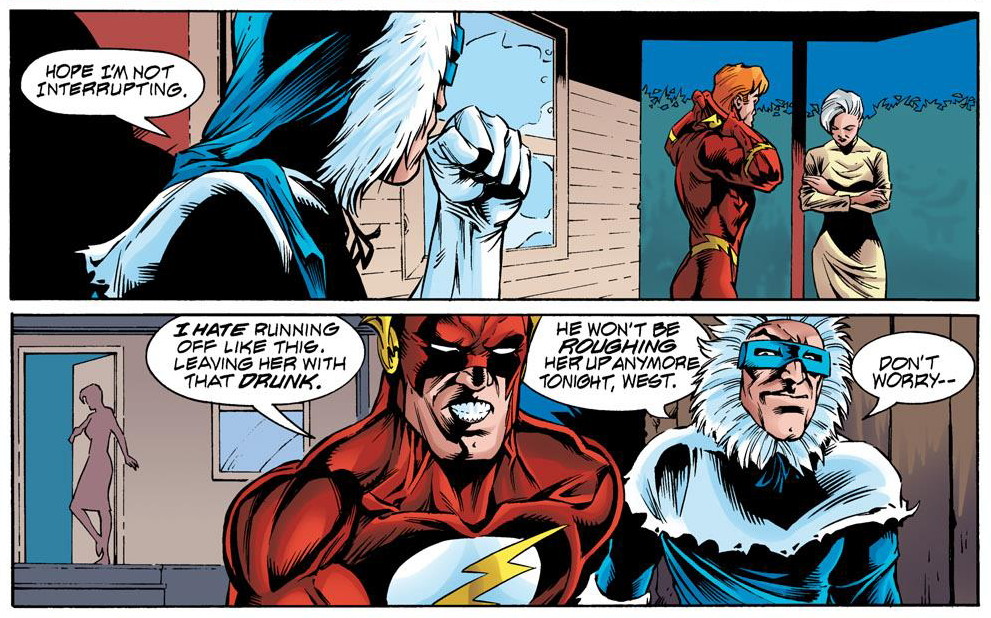 Flash is the series on which Geoff Johns’ growth as a writer was charted in public. That he always had the storyteller’s instinct is apparent from the opening pages of Wonderland, but other elements haven’t fallen into place. This introductory arc has too many plot contrivances, and Johns hasn’t yet learned to sacrifice a good idea for the sake of a better story.

He isn’t helped by the art of Angel Unzueta for much of this book. Unzueta’s Flash is ugly, lantern-jawed and musclebound, not the trim figure perpetual running would produce, and is either portrayed with a gaping mouth or gritted teeth. His layouts are awkward and every character is posed, often in a ridiculously exaggerated fashion. This is contrasted by a more sedate style to render flashbacks and a nice sequence rendered as a medieval tapestry.

The book opens with Flash being battered by the police to whom he’s not known, and unable to access his speed. Among the police is Mick Rory, better known to Flash and readers as the costumed criminal Heatwave. Regular readers of superhero comics will rapidly identify the alternate world scenario, and that’s soon revealed. This is a world not only lacking a current Flash, but one in which there has never been a Flash at all, but there is a Barry Allen, as gung-ho as the remainder of the police department.

Once that scenario’s explained, it leads into another from which the volume’s title is taken. It’s mediocre stuff, with a poor villain and very little indication that within two volumes Johns could be numbered among the best Flash writers.

Despite this not being Johns’ best work, there are signs of his laying the ground for what would come. He’s begun the process of redefining villain Captain Cold, giving caption insights into his character, and has introduced some concepts that would recur later in his run to far more satisfying effect. The series continues with Blood Will Run, and both are found within volume one of The Flash Omnibus by Geoff Johns.