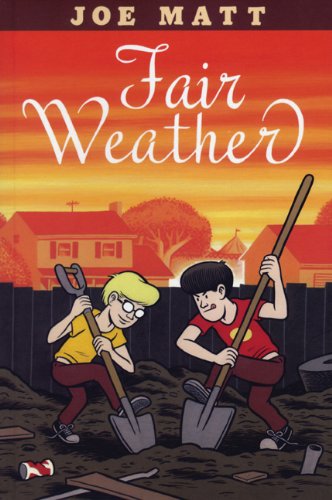 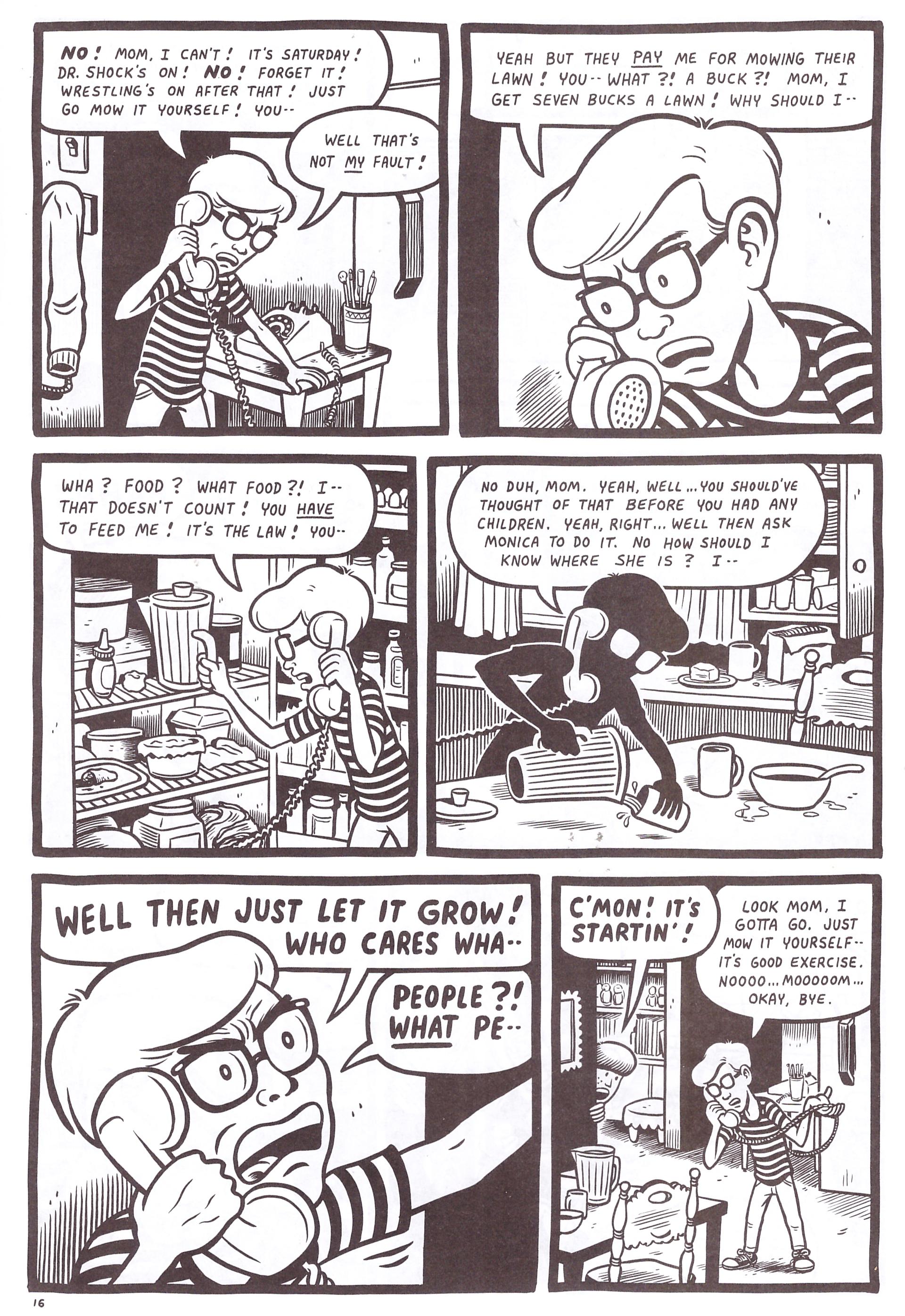 Having made a name by inviting us to view the scuzzy present day horrors of his selfish behaviour, tightness and disgusting personal habits, for Fair Weather Joe Matt turns the clock back to his young teenage self where he’s already evolving those traits. Several other unpleasant characteristics also manifest, including using people to do his dirty work, but with no conscience about betraying them or ripping them off if there’s a chance of personal gain, and an appalling attitude to his mother. A neighbour pays him $7 to cut her grass, and instead of recognising the generosity, Matt gleefully considers he’s ripped her off, and when it comes to mowing the lawn at home he considers $7 the going rate, as per the sample page. Don’t worry come-uppance is heading his way.

Matt’s changed his art to present the 1970s. While remaining at six panels per page, most of those panels are more open, with the viewpoint set at a greater distance, possibly a deliberate attempt at conveying the past, with the drawing as appealing as ever. It’s neat, compact, character rich, wonderfully composed and with an increasingly confident sense of pacing. When originally serialised, however, it was a circulation shedding disaster, not least due to the four issues collected here taking over two years to see print. Additionally, a considerable portion of the readership built up on the basis of seat squirming, confessional adult behaviour wasn’t prepared to follow him back to his youth. Some reappraisal is due.

While the car crash fascination of his present day life is absent, in some ways Fair Weather offers a more interesting perspective. In The Poor Bastard Matt partially acknowledged he behaved poorly, and friends weren’t shy in pointing it out, but as often as not he’d argue in the face of their condemnation, and present other facets of his character in a self-justifying manner. Although occurring entirely in the past, the two days presented in Fair Weather are by the adult Matt looking back on his relentlessly whiny and obsessive younger self with greater understanding of circumstances. He’s already behaving appallingly, but that perspective adds a slight level of sympathy as the eleven or twelve year old Matt is acting that way as a child who knew no better, and there has to be a sense of regret on behalf of the adult Matt to tell the story in the first place. Alternatively it could be self-bolstering “hey, I was always that way” justification, but as manipulative as he’s shown himself to be, that’s just not as likely.

Fair Weather isn’t as funny as Matt’s previous work, although there are plenty of funny moments, but neither does it have the sense of desperation. We know what Matt became, but here there’s still hope. Matt’s next graphic novel Spent returned to the crowd pleasing and sheet staining topics of his earlier work.