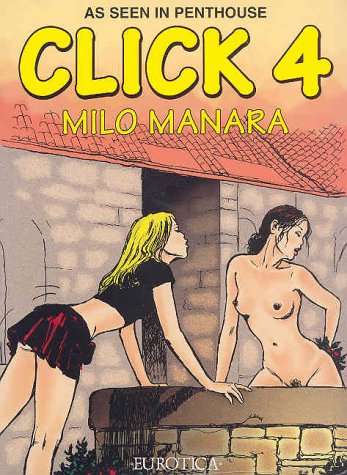 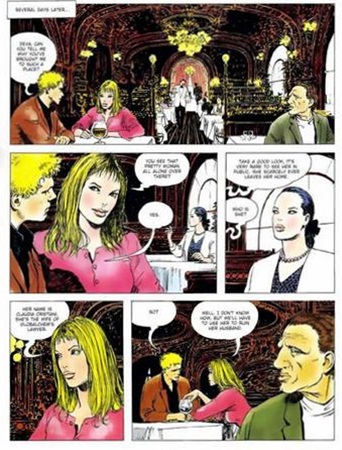 This final instalment in the Click! saga followed seven years after the previous book. The unfortunate Claudia is back home in Italy and learns of the shady business her husband is involved in. His ambition has overcome his sense of right and wrong in defending a corporation whose lax practices have resulted in death and disability for those who consumed their products. This doesn’t sit well with Angelina, the libertine daughter of one victim who was blinded by the corporation’s neglect. She identifies Claudia as a possible weak spot, theorising that a public scandal involving her will blunt the impact of her husband’s legal work. Those who’ve read the series to date will recognise a figure lurking in the early scenes.

Yes, the sleazy therapist Doctor Fez is back on the loose again, convinced he’ll be able to recreate the device that previously transformed Claudia into a sex-craving beast. A brief public test reveals this to be the case and we’re off once again.

Until the final pages this is the best of the Click! graphic novels. Given that his style has modified and progressed over the years, Manara’s art has been uniformly excellent, so what raises this fourth book is a coherent crime plot offering more than just explicit sex scenes. It also avoids the contentious alliance of sex with brutality that blighted the previous book. Some people will be offended by the notion that a repressed woman’s sexuality is artificially released, or indeed by the very idea of a sexually explicit graphic novel, and if that’s the case no amount of beautifully composed pages will overcome principle. Anyone else can enjoy Manara’s sumptuous depictions of a woman in the throes of sexual ecstasy.

One problem unites all four Click! graphic novels. Manara sets his plots in motion and then flits from one sex scene to another, some logically set-up, others just seemingly just thrown in as they occur to him. In the course of illustrating these his original plot falls by the wayside. If he’d actually spent a few more pages following through on and concluding the plot that stimulated the entire story this would have been a better book by far.

This volume is out of print, and far better absorbed in the first hardcover volume of Manara Erotica despite the lack of colour. Kim Thompson’s translation is infinitely improved, and the further bonus of that collection is it also incoporating the three preceding volumes.