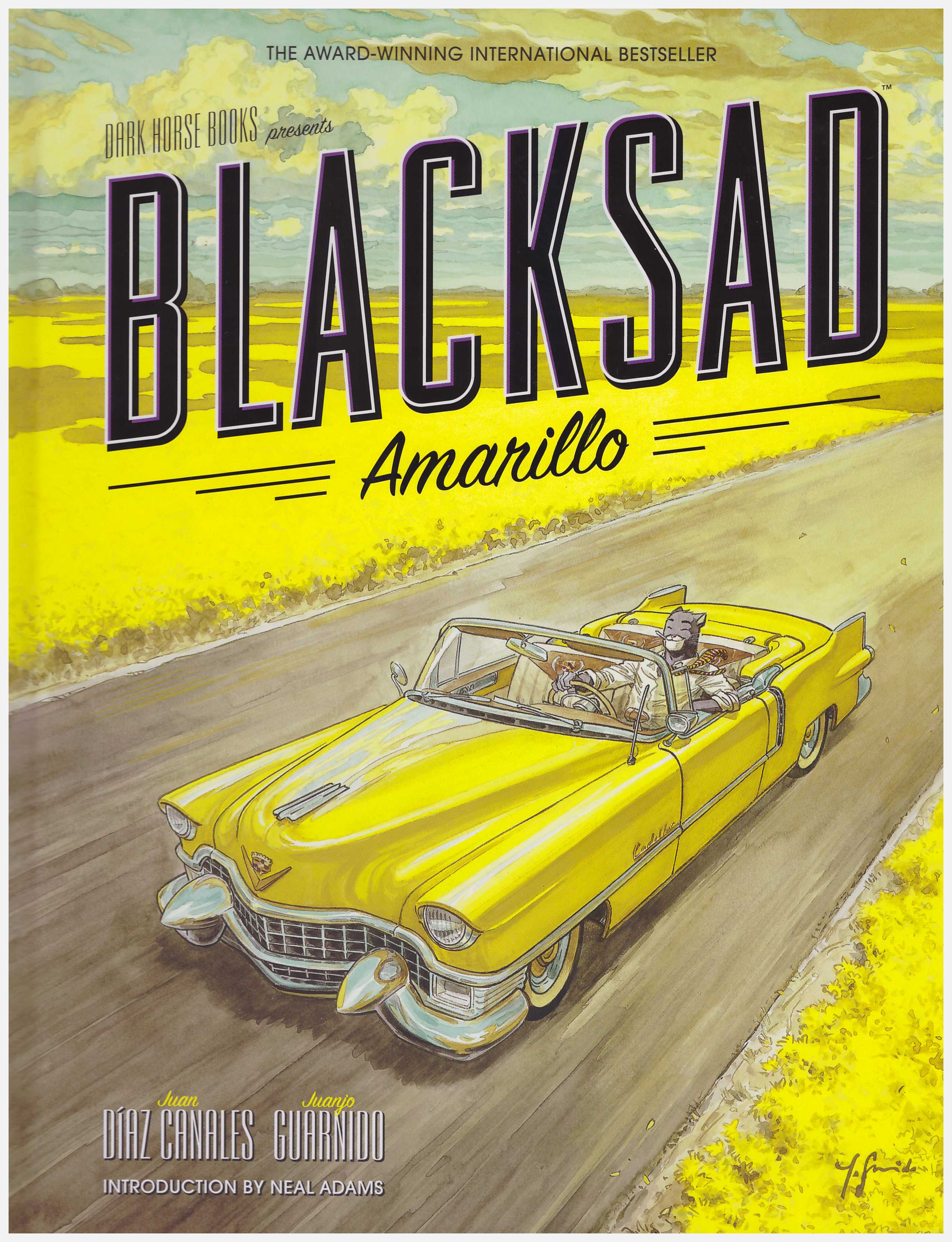 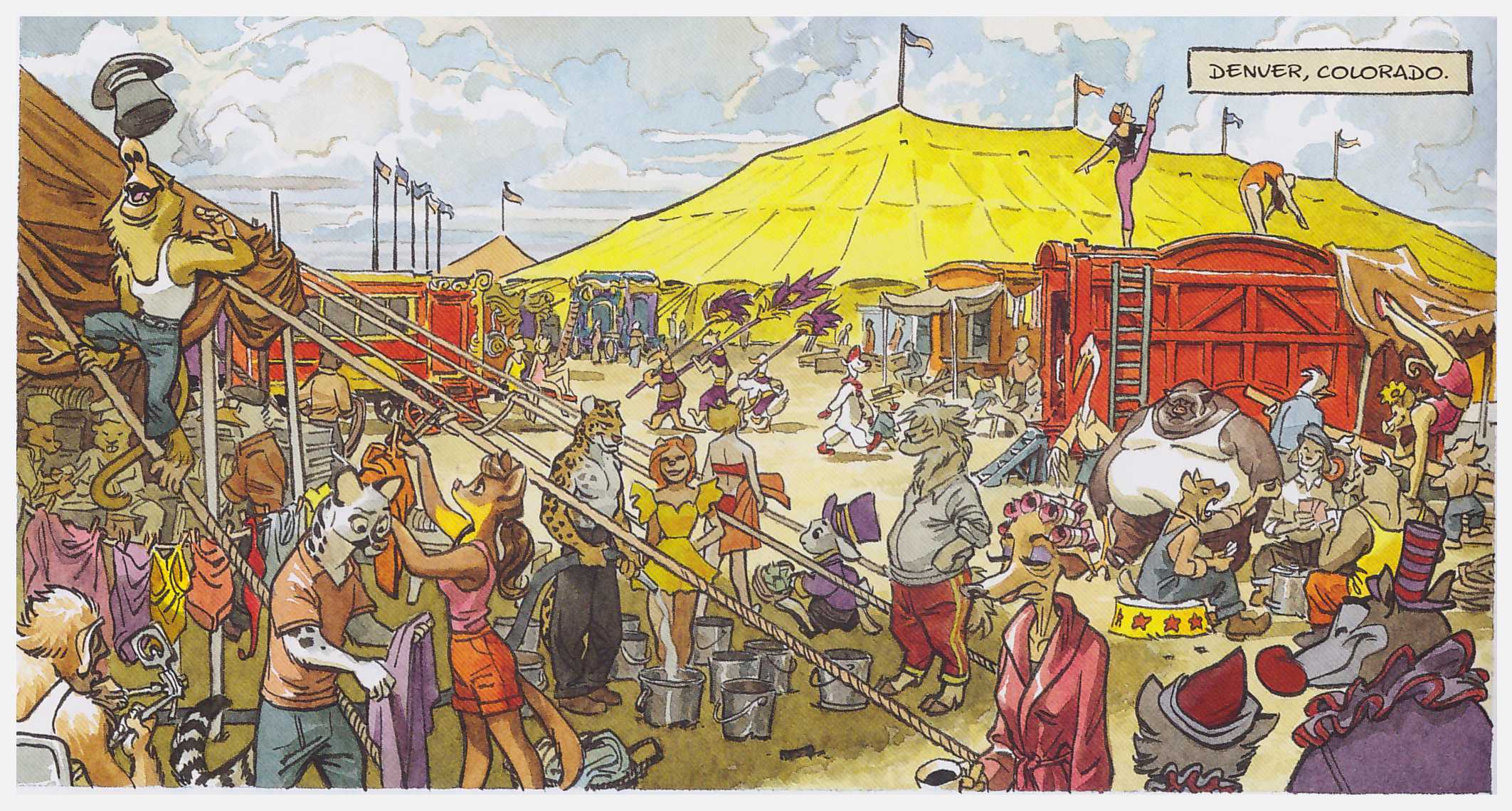 Juan Díaz Canales and artist Juanjo Guarnido continue their exploration of early 1950s USA with a heady mixture of bikers, hard-living beat poets and a touring circus. The latter is named Iwerks & Kupka, with Guarnido tipping a nod to the formative Disney illustrator and a later colleague.

This is the first Blacksad tale to make overt references to previous material. Amarillo continues directly from A Silent Hell, with Blacksad landing a job to drive a Cadillac Eldorado to Tulsa. Subsequent events lead to the involvement of the over-zealous FBI agents seen in Red Soul, now demoted to a regional office. Christmas comes early for them when the trail they’re following leads to a corpse with Blacksad’s wallet in the vicinity, including the faked FBI identity card he once used. The story’s primary corpse was also briefly seen in the previous book.

Canales propels Blacksad around the USA, although Amarillo is never visited. It’s a clever title referring to one of the cast members, who could be characterised as a cowardly lion. Jack Kerouac’s On the Road is very much an influence overall, both on the meandering narrative and characterisation, while completely in tune with the 1950s themes that form Blacksad’s continuing backdrop.

It’s surely more difficult with each passing story for Guarnido to conceive new animals that will survive the anthropormorphisation process, but he comes up trumps again with a grumpy koala, an angry bison, and a racist, cleverly portrayed as a parrot. Shady lawyer Neal Cosmo accompanies Blacksad for much of his tour, and is characterised as a hyena with all the associated traits.

Guarnido’s art is as spellbinding as previously, but there are several elements differentiating his work here from the other books. He’s acted against previously stated instinct by painting most of the story in a bright and varied manner. Perhaps there was no other choice with a circus involved, but the continual vivid colours surprise. There’s also no apparent secondary message to the colour as there has been in the preceding volumes, and instead of Blacksad wearing his familiar trenchcoat or black suit he sports a natty green number.

An interesting debate is initiated in the opening pages about what constitutes living a full life, and how only doing so can deliver truth in writing. It’s subtly handled, but various other characters throughout deliver their thoughts, and even when they’re not chipping in, the debate reflects characters such as Blacksad’s sister. Other hints about Blacksad’s family and past are dropped in without explanation, serving as both naturalistic dialogue and tantalising hints.

There are few minor problems with Amarillo. For all the issues the series raises, only Red Soul has featured a strong female character, and one element of the plot involving the circus is, on reflection, an unnecessary detour that adds little to the overall narrative. This, though, is minor carping about an otherwise top notch read.

In his introduction Neal Adams is effusive about Guarnido’s art, but damning about the translation of the first Blacksad volume. While there were teething problems it’s not as poor as he claims, but whether down to Adams or Kate LaBarbera, in place since the previous volume, this is a far smoother read than the earliest translations.

It’s also worth noting the care the creators place in the end papers. Beyond the first volume’s stunning Manhattan street scene, these feed into the content. Overseas editions of Arctic Nation concluded with Blacksad keeping his word, and early in Amarillo he’s provided with a camera and the endpapers here show the resulting pictures. 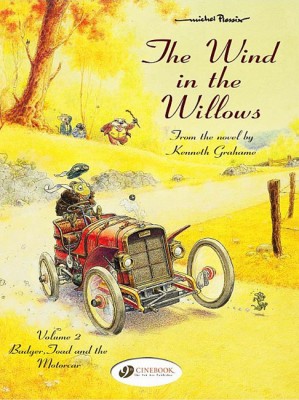 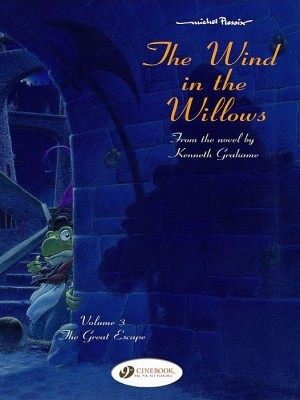 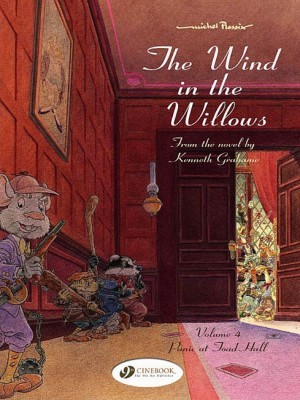