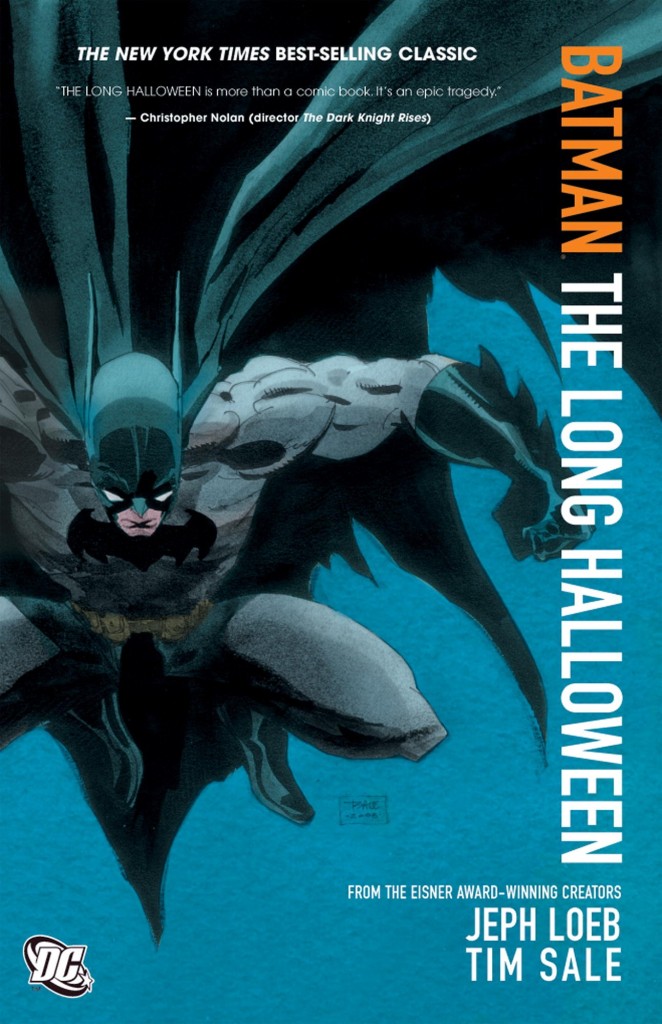 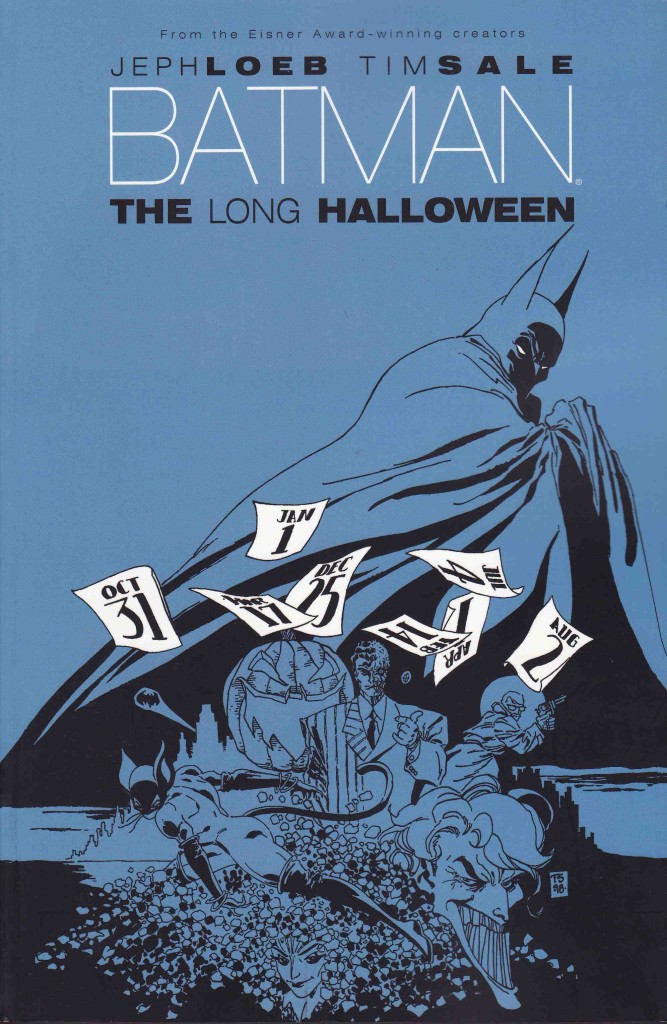 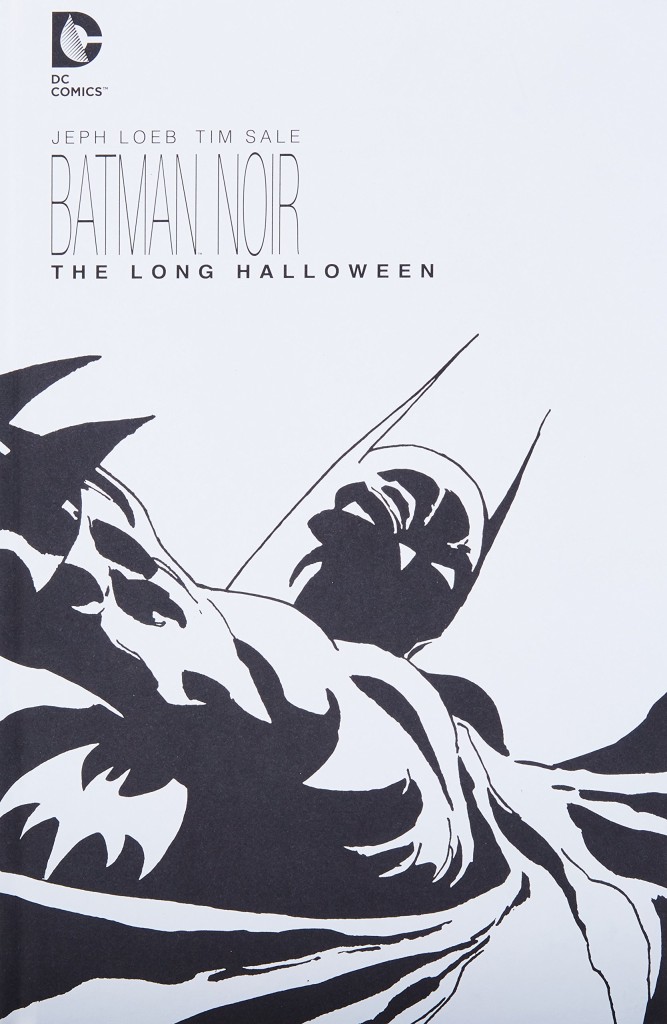 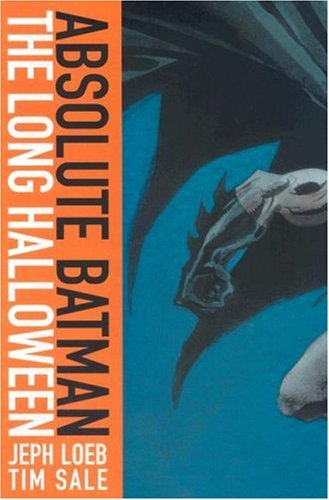 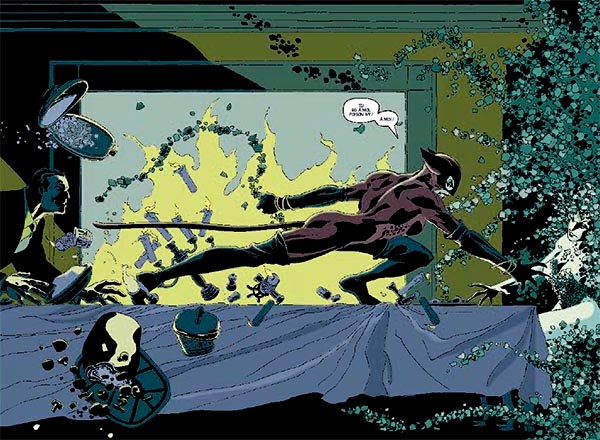 The Long Halloween is a very clever Batman mystery story running over thirteen chapters, each centred around a day of celebration, and featuring most of Gotham’s primary villains.

There’s an emphasis on this being set in the days before the lunatics took over the asylum, and how Gotham changed when they did. As the story opens the most notable crime figure in Gotham is gangster Carmine ‘The Roman’ Falcone, whose life and organisation begin to crumble on Halloween. On successive days of celebration thereafter those close to him are murdered by someone who’s dubbed the Holiday killer, or just Holiday, and well capable of eluding the novice Batman. As much as the focus is on Falcone, it’s also on hard-nosed district attorney Harvey Dent. Those familiar with his name will see his story well appended.

Writer Jeph Loeb drags the mystery through the book to a well-conceived finale. In one sense the killer is merely a means of examining Gotham’s prominent citizens, but Loeb’s plotting of the final chapter, in which all is revealed is deft enough to surprise and surprise again.

Applying the rigid formula of one holiday and one month per chapter does produce occasional clumsy narration. A mother waits a month to confront someone about her son’s death, and a grand jury is convened with extraordinary rapidity. These, though, can be overlooked among the impressive touches of the bigger picture. Loeb’s method of storytelling is spartan, with fine soundbite style dialogue (“Life is made of little disappointments Mr Falcone, it’s what makes what we do so challenging”). This permits impressive large illustrations and results in a relatively rapid read for those not lingering over Tim Sale’s superb art. Loeb still has room for entertaining diversions, such as a chapter around the midway point when the Riddler speculates as to the killer’s identity.

Sale’s art is breathtaking. He takes his inspiration from the sparse Batman of the 1940s, draped in shadow, yet can also open up his world into the brightness and colour of Christmas. The original publication occurred before the contribution of colourists was cover credited, and in Gregory Wright Sale had a very sympathetic collaborator. Sale’s stylised interpretation of Batman’s primary villains is imaginative, if not always successful. His Joker’s teeth are so long and so many his mouth can’t close, yet the pallid allure of Poison Ivy, engulfed by the sprawling vegetation of her plants is stunning.

There is a loose end, a character permitted to survive the assassin’s bullets, and that’s clarified in a sequel Dark Victory, which doesn’t match this volume.

This appeared relatively early in the careers of both Loeb and Sale, and in the decades since Loeb’s reputation hasn’t been sustained. Don’t let that put you off. This is a smart package with a compelling narrative, and exceptionally well drawn.

Such is the esteem in which it’s held, The Long Halloween has been reprinted in assorted formats. For the wealthy there’s DC’s Absolute slipcased, hardcover edition. The art benefits from larger reproduction, but there are few extras beyond the luxurious packaging to entice someone who’s already bought this book. A four page sequence omitted due to space considerations is added to little effect, and there are interviews with Loeb, Sale and Batman movie staff Christopher Nolan and David Goyer. Alternatively, there’s the monochrome Noir edition. This is more a curiosity. It better displays Sale’s work in crisp lines, but devalues the total impact by removing Wright’s thoughtful colours.