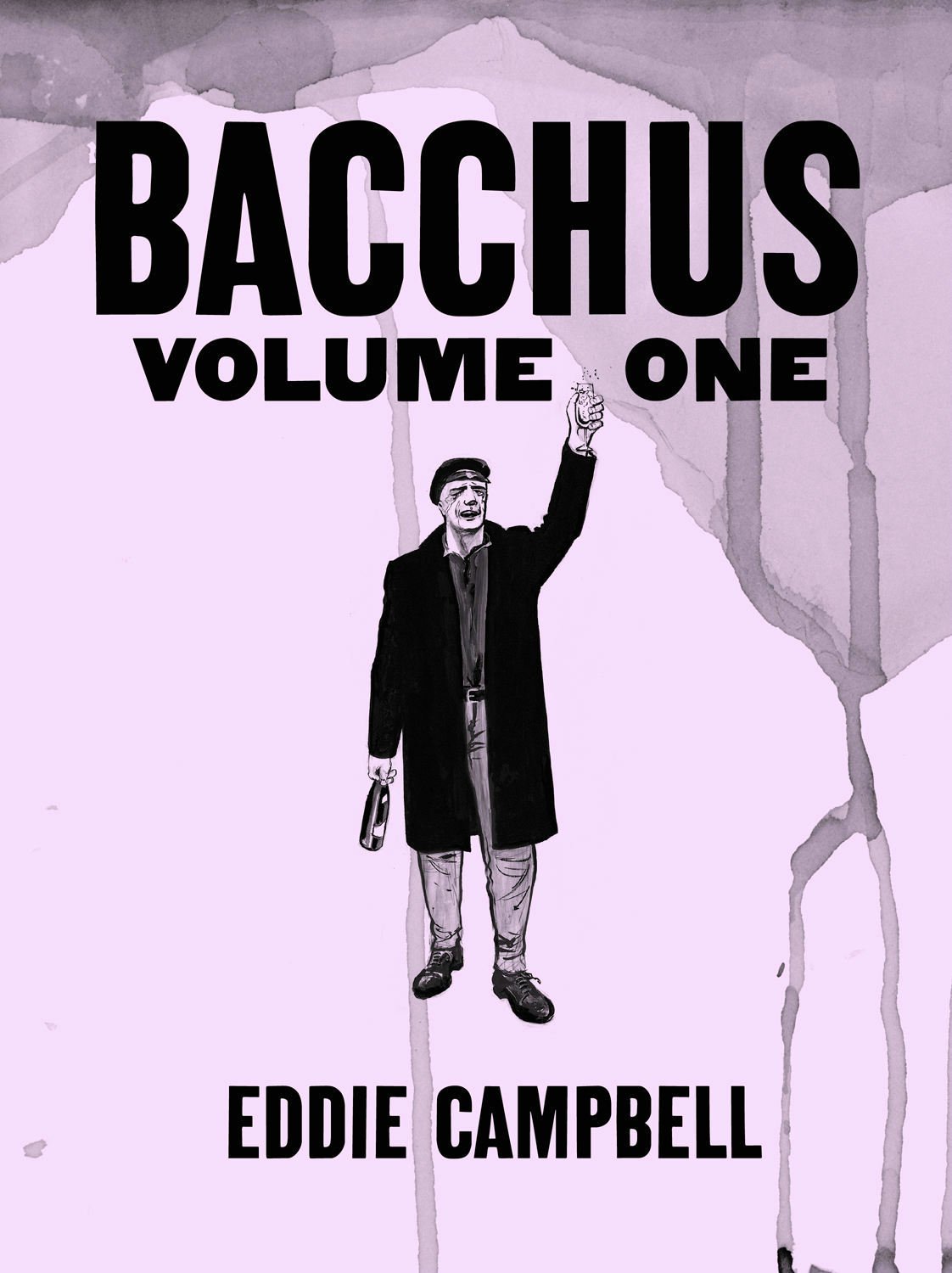 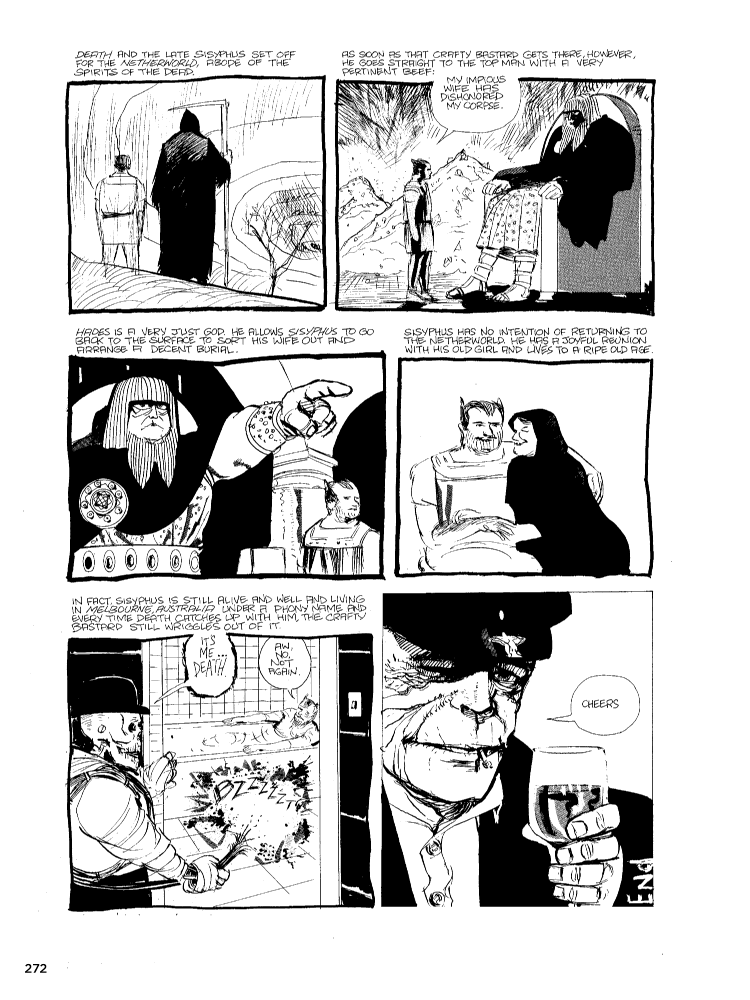 Named after the Greco-Roman god of wine and revelry, Bacchus, is actually the story of a number of Olympians facing their last days in the 20th Century.

Eddie Campbell made his name with the slice of life Alec, so his announcement of a series about Greek gods seemed a strange departure, but the logic soon became clear. Alec and Bacchus, were both lovers of wine, women, and song, and raconteurs, artfully spinning tales of ‘epic’ parties, alluring ‘goddesses’, betrayal, revenge, and the like.

The publication history is as labyrinthine as the stories themselves. The main thing to know though is that there were two distinct and indeed separately published strands: Campbell’s attempt at an “American comic book” showdown of super-powered gods, and the more gently poetic events and musings of Bacchus on his travels. Both strands are covered in this hefty Omnibus, which gathers the first five Bacchus volumes, with Campbell adding a brief, but illuminating introduction to each.

It starts, in the best classical tradition, ‘in medias res’ – in the middle – and gradually fills in the ancient back-story through tales told to entertain hosts and companions. Bacchus is caught in the machinations of his more ambitious contemporaries, Joe Theseus and The Eyeball Kid. Theseus is most famously the slayer of the tragic Minotaur, but secretly son of Poseidon, god of the sea. The Eyeball Kid is the grandson of Argus of the Hundred Eyes, and born with a mere ten pairs, so somewhat easier to draw! An upstart opportunist, the Kid managed to inherit the greatest power of Olympus. Other characters include the more famous Hermes, god of ‘communications and exchange’. As volume 1’s title Immortality Isn’t Forever suggests, they know they’re nearing the end and are getting down to unfinished business.

Slowly emerging from the background are the Telchine brothers – Chryson, Chalcon, and Argyron – The Gods of Business of the second volume. Never in the forefront of the myths, it turns out they had key roles in some defining events – from the ascension of Zeus, through to the final rebellion in the underworld. There’s no end to their ambition, and only the now allied Theseus and The Eyeball Kid stand in their way. This strand resumes in the fourth volume The Eyeball Kid – One Man Show.

Bacchus, though, prefers to enjoy his final days drinking and reminiscing, so absents himself. He’s next seen Doing the Islands with his human pal Simpson. This is the other strand of the series, resuming in  Earth, Water, Air and Fire. They’ve arrived on Sicily – home of the mafia, as well as the ‘smith-god’ Hephaestus who, Bacchus tells us, created three magic eyes. These have been through the hands and heads of some familiar characters, who return here, reuniting the story strands for a finale that’s genuinely dramatic.

On the art side Campbell gradually develops the pen and ink style that came to fruition on From Hell. Here though, it’s a mix of brilliant, mediocre and weak panels. Ed ‘Ilya’ Hillyer progressively takes over the art on the Eyeball/Theseus strand and manages to retain Campbell’s strengths while ironing-out the weaknesses.

Olympians negotiating the modern world is an inspired idea. From it Campbell crafts a story that’s suitably epic, wittily engaging, and genuinely illuminating about the ancient Greeks and the modern world. There’s a tidy end to this Omnibus, but most readers will still be keen to see what’s to come in Omnibus 2. 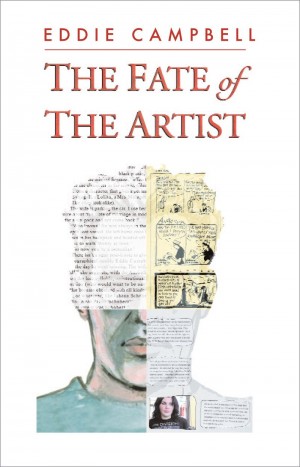 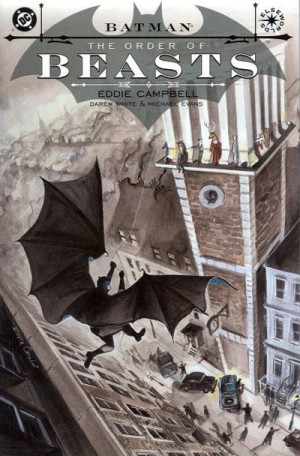 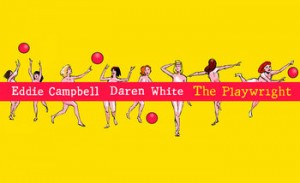