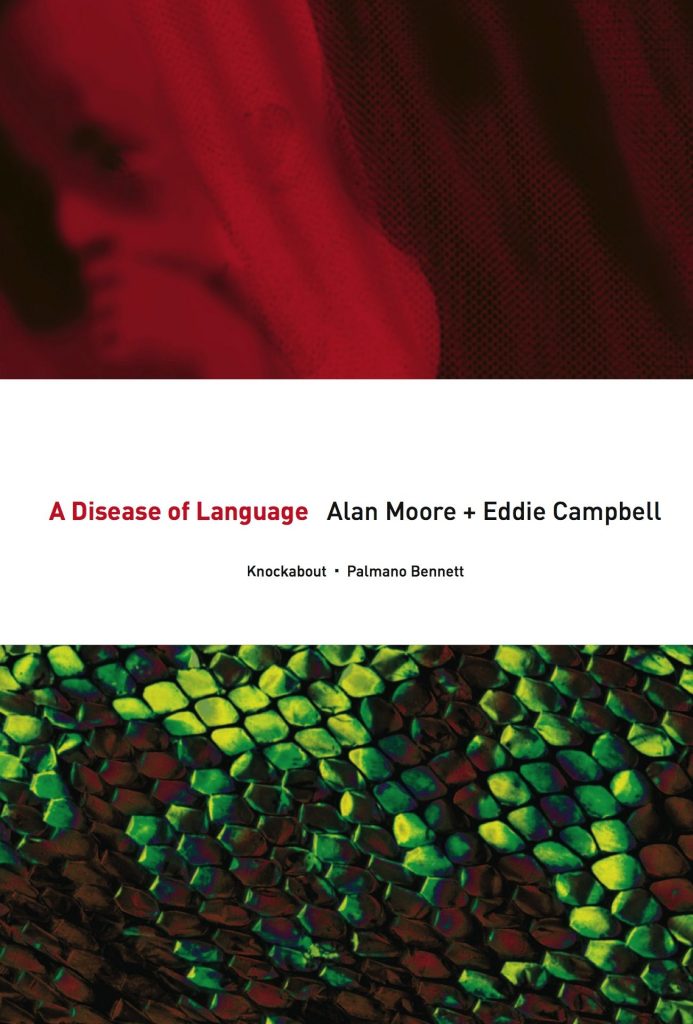 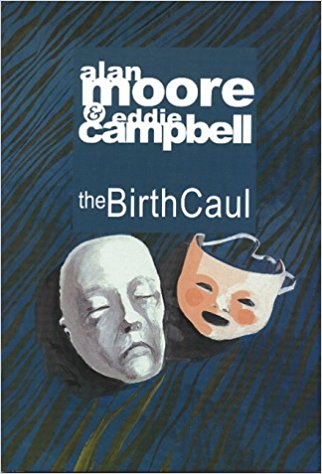 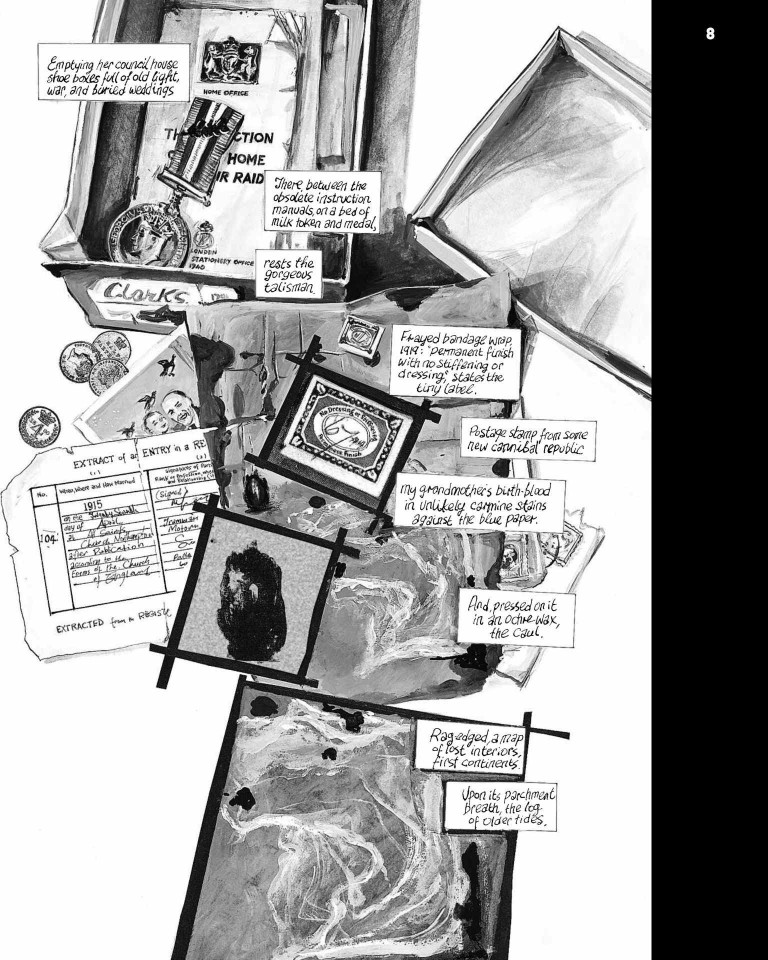 A Disease of Language is a fascinating outlier in Alan Moore’s comics career. It brings together in hardcover, the pamphlets ‘The Birth Caul’, and ‘Snakes and Ladders’, adaptations of texts for Moore’s performance pieces, never intended as comics. Artist and adapter Eddie Campbell notes in his introduction that on hearing a recording of the former, he felt compelled to re-make it as drawings, and asked Moore’s permission to make what he called “a pictorial setting” of it.

The caul of the title is a membrane from the head of new-born Alan. Found in his mother’s effects, it triggers an emotional and intellectual journey, backwards from her death to his own birth and gestation. Moore’s text, described here as “a shamanism of childhood”, is less a novel than an elegy in poetic prose.

Campbell’s adaptation begins in literal fashion, with the bedridden, ailing mother in the arms of the distinctively hirsute author. The very next page (pictured), of his mother’s keepsakes unpacked from their battered shoebox seems to set out Campbell’s stall – a juxtaposition of resonant images, painted and collaged, spilling free from the rigid comics grid. Turn the page again, and we’re with Moore in shamanic mode (hair down and body-painted), in a grand chair below a royal crest – Newcastle’s Old Courthouse, the venue for the performance. Campbell seamlessly flips between images of Moore, and Moore’s imagery.

The concerns are familiar, but still potent: history manifest in the present – the Courthouse sits on that physical and conceptual boundary Hadrian’s Wall – Roman sword followed by the British crown. Moore explores everything from the binary extremes of work and leisure, through adolescent struggles for identity, back through sexual discovery to it’s stirrings in childhood, then infancy – told in a child’s developing language – visualised in worms eye views, and terrifyingly encroaching shadows.

After ten years of the engraving-style pen and ink on Moore’s From Hell, Campbell surely relished this chance to spread his artistic wings. Within a handful of the unnumbered pages he shifts from expressively loose pencil work, to almost photographic painting, to pasted found images of cultural artefacts. The infant sequence alone has faux child’s drawings, toys rendered in iconic child-clear precision, and a Munch-like screaming face poking out of collaged doll’s pyjamas, amidst ripped wallpaper. Dave McKean is a likely influence, but ironically, despite the origins of the text, Campbell’s result is somewhat less theatrical. Today we’d expect to see this in colour, but the black and white printing gives a unity and coherence to these disparate effects. Campbell’s art can be hit-and-miss, but along with the aforementioned From Hell, and the zip-a-tone Impressionism of Alec, this is some of his most satisfying artwork.

‘Snakes & Ladders’ has some commonalities, linking the performance venue to some famous lives, from Oliver Cromwell, to fin-de-seicle artists and writers. The art moves even further from comics traditions, yet results in some elegantly powerful images – notably the page of the Pre-Raphaelites and their multiply painted muse, descending a staircase resembling the DNA helix.

One of Moore’s greatest strengths as a writer is his ability to visualise his stories, and detail these for his artists, so is an adaptation of a Moore text not intended as a comic actually a good idea? In other hands it could be a redundant flop, but Moore admires and trusts Campbell, who in turn delivers a sympathetic yet liberal interpretation.This is the least accessible end of Moore’s varied output, and perhaps not for everyone. It’s a demanding read, though a rewarding one.