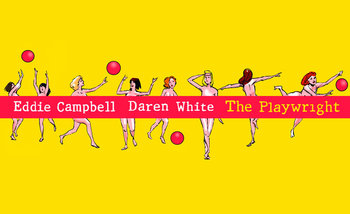 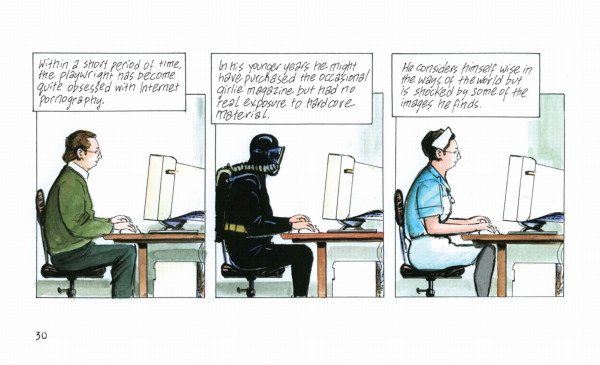 The Playwright is more of a graphic novella rather than a fully blown novel and takes a dispassionate and distanced view of the titular character through a series of unconnected scenes. He is a man in late middle age who’s enjoyed a successful writing career. He spends a great deal of time thinking about women and sex and enjoys ogling women on the bus, memorising them to fantasise over later. The story starts with the playwright lodging with Uncle Ernie to both assuage his loneliness and make him feel good about providing company for the old man. He is estranged from his parents due to his successful screenplay written about his retarded older brother, all his work is inspired by events that have happened to him, and he is as unflinching about himself as he is about others of his family.

The book is in landscape format and most pages present a few discrete panels successfully introducing a distance between the reader and the subject. Eddie Campbell’s art is often dark and saturated and doesn’t offer the same detail to be found in the text. The playwright is viewed at arm’s length and whilst getting to know him better as the story progresses, the art and formal language used discourages empathy. He is only named once in the story, in a picture of one of his early works and other than Uncle Ernie, the only character named is his eventual liberator.

It can be a bleak and rather uninvolving story but there are some genuinely funny moments such as the rumination on pigeon defecation and the unfortunate death of the nurse’s father. The panel that lives longest in the memory though is the abandonment of a wealthy widow he meets when he returns to Cyprus on holiday. In his mind he imagines a romance developing but is horrified when he overhears a group of men talking disparagingly about her and never sees her again. Her confusion and anguish is perfectly captured in a panel which retains its impact even after the rest of the story has faded.

Despite this sorrow, the book is an upward journey of an author who comes to regret his decision to sacrifice his relationships to his muse and eventually manages to reverse it and find something more fulfilling.

While the playwright is difficult to identify with, many UK readers might note similarities with a famous Yorkshire playwright who also had a relationship with his housekeeper.