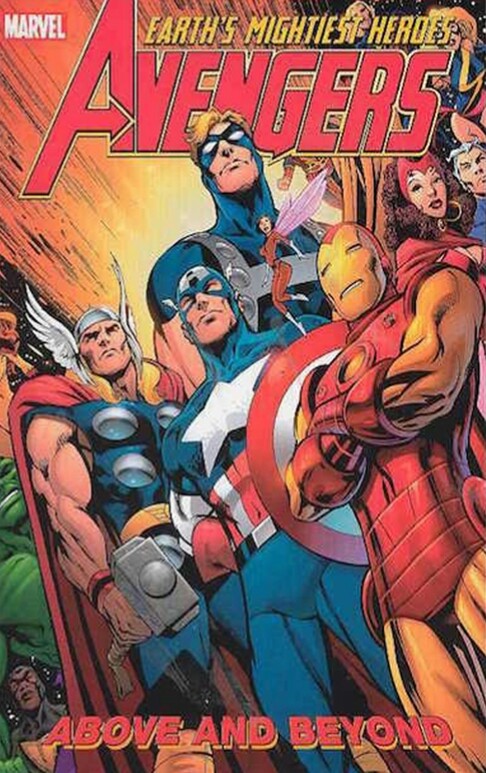 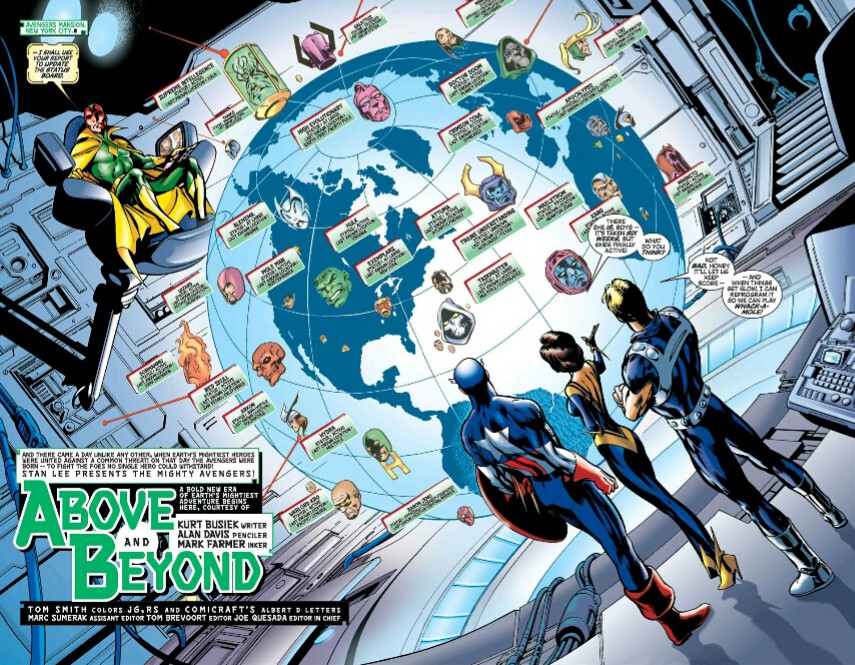 In 2001, we entered the post-George Pérez era of Kurt Busiek’s Avengers run. The cliché would be to say that Pérez took some inspiration with him when he departed, as when he left Avengers the first time in the 1980s, or when he left Teen Titans. There’s some truth to that – after Pérez’s last issue and a Maximum Security crossover that’s omitted here, a two-issue fill-in by Steve Epting isn’t very impressive in story terms. Epting drew Avengers for several years in the 1990s (a period not generally fondly remembered, due to poor quality stories), and is fine here, but the narrative is daft, serving mainly to set up the next big change to the Avengers.

This is the Avengers transforming themselves from a relatively small team into a massive organization operating a large roster of active and semi-active members, more like the Legion of Super-Heroes than the Avengers of the past. Fortunately, this coincides with the arrival of artist Alan Davis. With his clean, dynamic line, Davis is as good as Pérez without being derivative. and he immediately changes the Scarlet Witch’s costume to something that allows her a little dignity. In response Busiek ups his game, and the Hulk/Diablo sequence that follows is enjoyable. It’s also interesting to note the leadership role Buseik gives to female Avengers such as the Wasp and the Scarlet Witch. It almost makes one forgive Busiek for his continuing failure to wind up the Triune Understanding subplot, which by this point had been running for years, and hardly advances a jot here. The Yellowjacket plotline is similarly unresolved, though there are at least developments in respect of this narrative.

After that, the next year or so had already been collected in The Kang Dynasty, so this volume skips forward to Busiek’s last ever Avengers tale (if one excludes JLA/Avengers and Avengers Thunderbolts: Best Intentions), a silly story about doing the Avengers’ accounts. Yanick Paquette draws this with perhaps a bit too much emphasis on female characters posing to show off their bodies.

As well as this, there’s ‘House Cleaning’, drawn by Ian Churchill, which features Jarvis answering questions from the Avengers’ government security liaison. It’s mainly an exercise in Busiek setting the record straight on certain points of continuity.

And then there’s ‘The Ultron Imperative’. This was a jam comic, i.e. one in which many creators took part, each working on their own short sections. It’s plotted by Busiek and Roy Thomas, and scripted by Thomas and further Avengers past luminaries Steve Englehart and Roger Stern. There are a few flashes of the old Englehart magic in his chapters, but other than that, none of the writers seem to be trying much. Nor do any of the various artists who worked on the chapters distinguish themselves particularly – the best is John Paul Leon in the first chapter. One might also note Mike Royer trying to make Jorge Pereira Lucas look like Jack Kirby, and Jim Starlin apparently drawing in his sleep. It’s plodding and dull, and as a coda to Busiek’s impressive Ultron Unlimited, this is something of a disappointment.

The material here is also to be found in Avengers Assemble, volumes 4 and 5, and Avengers by Kurt Busiek and George Pérez Omnibus, volume 2.