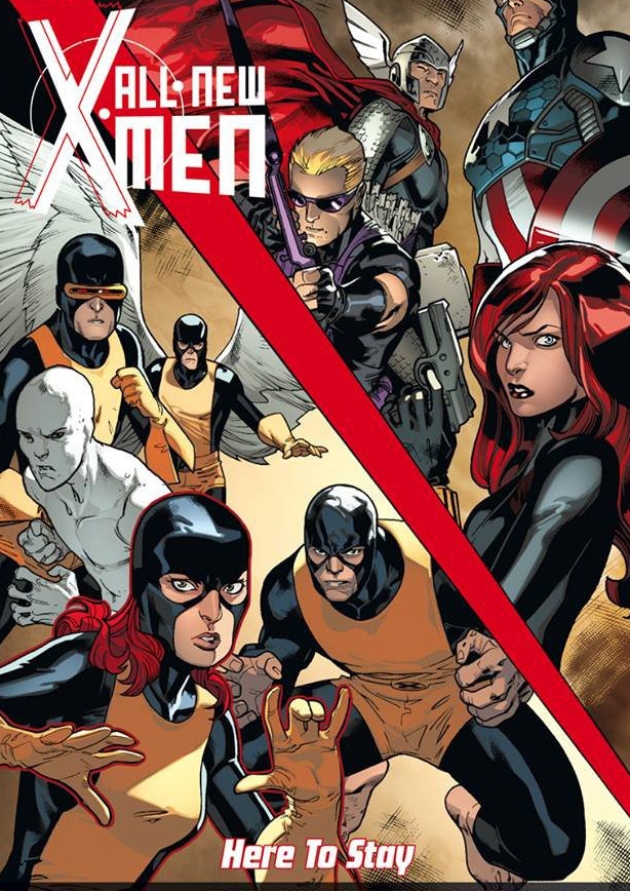 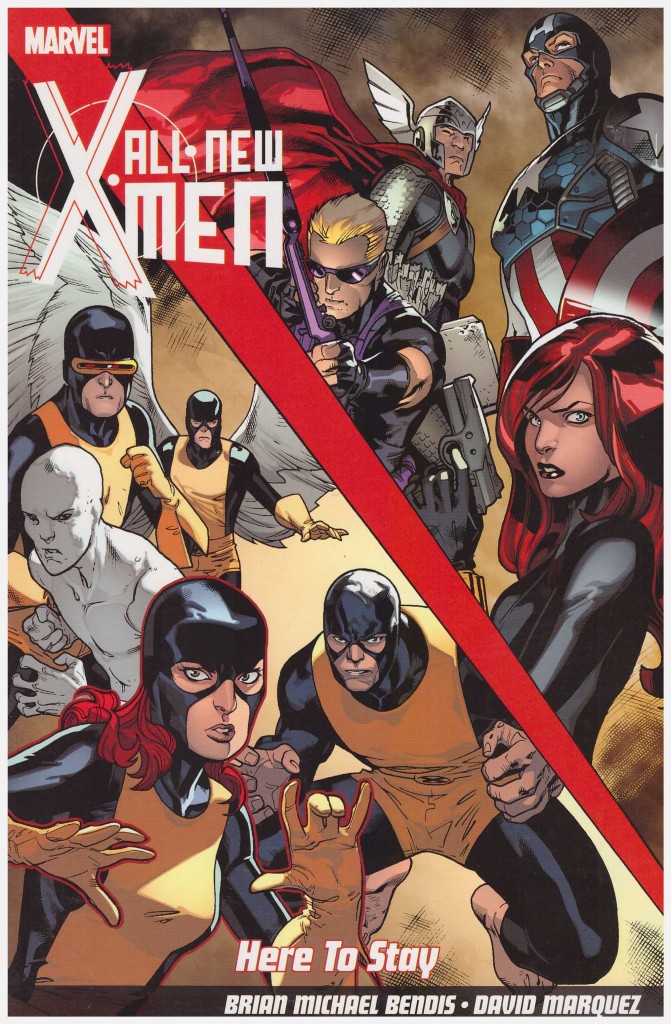 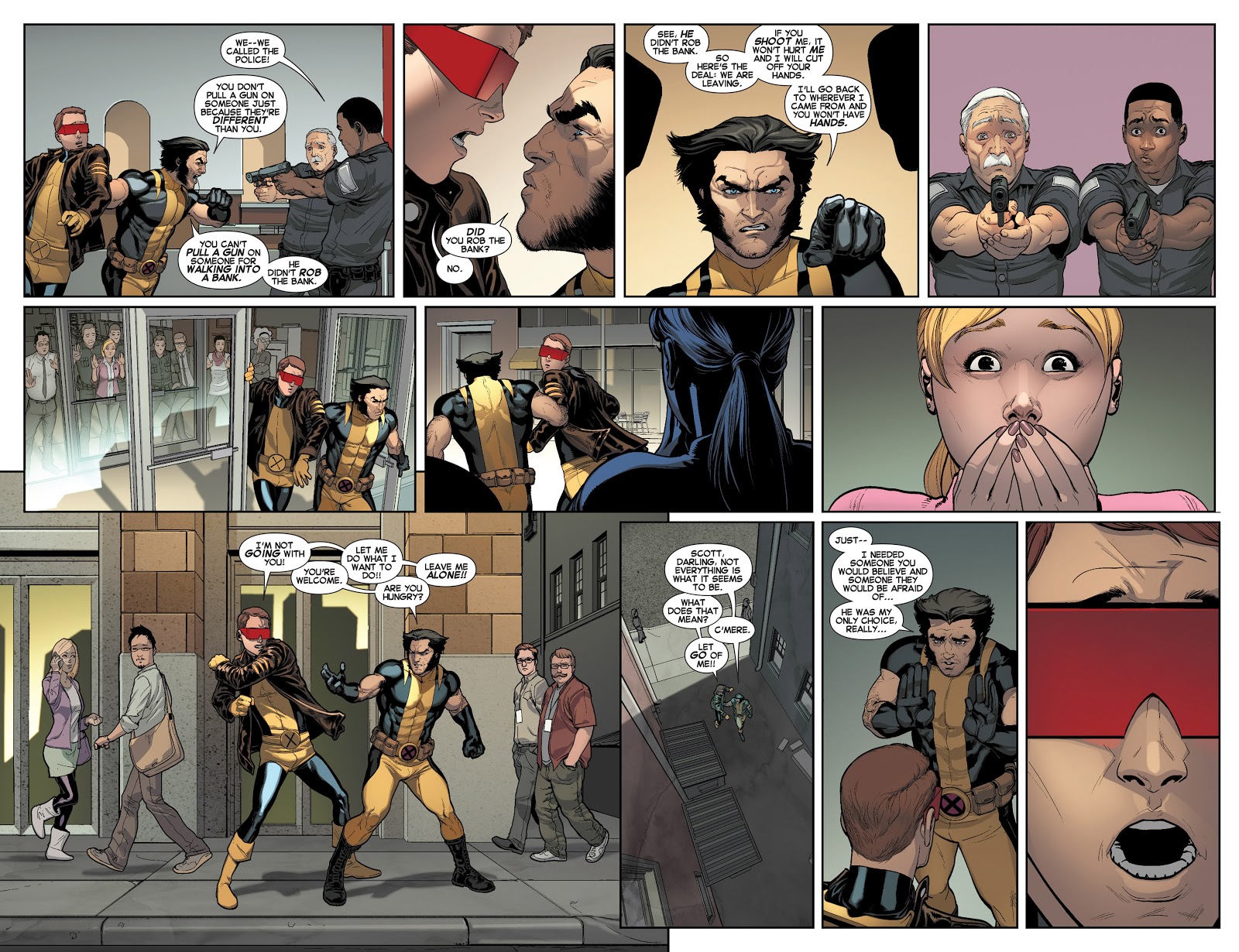 Those who’ve not read the first volume of this series, Yesterday’s X-Men, or Here Comes Yesterday if reading the UK edition, should be aware that reviews of subsequent books contain spoilers, in this case from the third paragraph.

David Marquez temporarily replaces Stuart Immonen as pencil artist for the first chapters, and is equally good. He has a clearer, fine lined style, but doesn’t quite match Immonen’s expressiveness in the later material.

So, in the previous volume the earliest incarnation of the X-Men were retrieved from some indeterminate point in the past. It’s far enough away that Cyclops doesn’t recognise a Sentinel, and is astonished at cellphones, bottled water and magazines priced at $5. Lucky he didn’t see the comics. Both Marquez and Immonen excel at visually delivering the youth and concerns of the younger X-Men coming to terms with who they’ve become. The older versions of Beast and Iceman are present to offer help and advice, while the present day Angel is far removed in character from what he was. “Whoops, sorry to interrupt your villainous rant”, he informs Lady Viper as he crashes into her, “you were really building to something there”. Jean Grey is long deceased in the present, but even worse is Cyclops’ discovery that his future self has rejected the core beliefs of his youth.

Writer Brian Michael Bendis is on top form here. He’d utilised some of the cast while writing Ultimate Spider-Man, and so his presentation of Iceman and Kitty Pryde impresses. There’s a great scene of them extemporising a conversation between two others, so delivering the required information in novel fashion. There are those irritated by Bendis’ clipped, smart-arse dialogue, but it never overwhelms, he never sacrifices character for a good line, and many are very good indeed: “So, what did we do wrong here? And don’t say ‘everything’.”

Cyclops is the core character over the opening chapters, exploring the world into which he’s been brought, and learning about other mutants of the era. He also discovers he was once married. Jean Grey’s lack of experience with her newfound telepathy and mind control leads to several interesting moments, and Angel is the one original team member uncertain about his new location. The younger incarnation of the Beast, having played a large role in Yesterday’s X-Men, is largely sidelined here.

There are two guest appearances for the Avengers, one charming and one terrifying in context, but not enough to warrant their cover prominence, and there’s also a new incarnation of an organisation familiar to long-term X-Men readers. Yet it should be noted that over two volumes to date this incarnation of the X-Men remains a largely villain-free zone. Some do appear, but not in conflict with the team. There’s enough of that provided internally.

It might seem that the ending is a shoddy marketing ploy, but the way later chapters occur make it the most convenient break point. This is fantastic superhero entertainment throughout, and the fun continues with Out of their Depth.