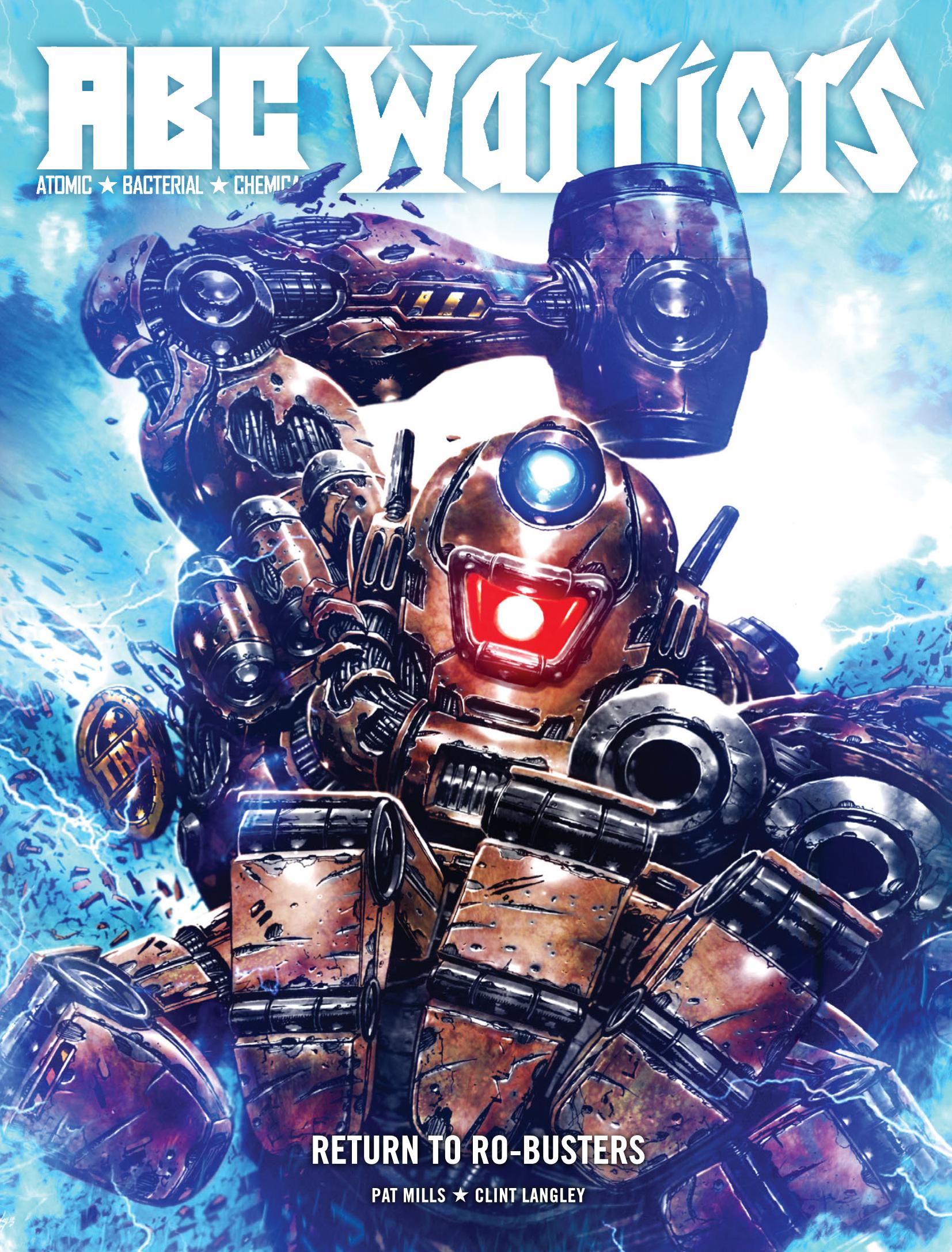 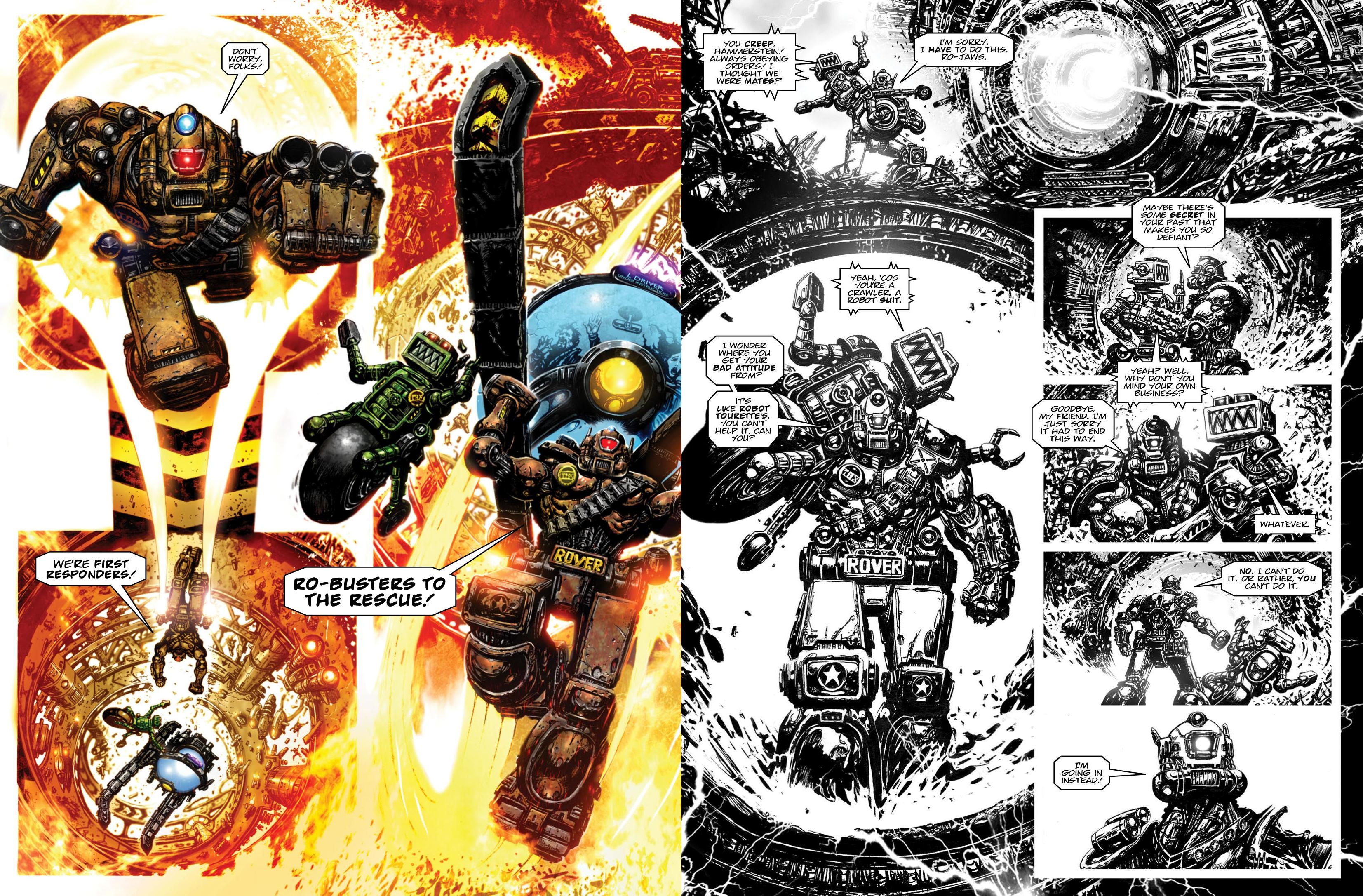 While ABC Warriors is by some distance the longer lived feature, its genesis was within an earlier strip about a robot rescue squad responding to disasters. It was in Ro-Busters that Hammerstein was introduced as a surplus war droid, and where he met Ro-Jaws the sewer droid and Mek Quake, while the strip also introduced the greedy and unprincipled Howard Quartz, whose human brain resides within a robot casing. Over the past two ABC Warriors books Pat Mills has been transforming Quartz from an unprincipled profiteer to a criminal mastermind, shining new light on old activities, and if there was any remaining doubt about his methods, that was shredded in Return to Earth.

From his ABC Warriors début Clint Langley has been an excellent artist, but what wasn’t apparent from his first work is just how adaptable he is, able to vary his style according to circumstances. In the opening chapters he takes his lead from the layouts of the original Ro-Busters strip to produce a wonderfully drawn visual pastiche, before in the black and white sections switching to an ever more refined approach that loses none of his capacity for detail. An effective visual technique is to use the occasional spot of colour representing a light source in these pages, and he revisits some scenes from the original strip, providing an improved cinematic spectacle.

Mills wrote those earlier Ro-Busters strips, and uses them as inspiration, picking at a plot that was never really resolved, a robot revolution, infusing it with ideas about the way authorities seek to control the general population, and the 21st century response to what’s considered terror. For those who remember the original adventures (available as The Complete Nuts and Bolts) Mills also revisits other plots from thirty years previously, giving them a sinister new meaning, while adding a new layer to Ro-Jaws’ character. Previously a form of smutty comic relief, and very good at it, Mills adds other personality extensions to his lack of a restraint chip and introduces the defiance code, a form of virus freeing robots from servitude. It exemplifies the creative ideas so often found in Mills’ writing, sometimes just used as throwaways, but here given a purpose underscoring the entire story. Of necessity it’s Hammerstein and Ro-Jaws who’re the focus, with Mek Quake secondary, but fans of the other characters get little joy as they’re reduced to passing comments in cameos.

Since reviving the ABC Warriors in 2009 Mills has been constructing parts of one massive story, inching present day events forward while looking back to the past to display what informs the plot. In other circumstances the time taken to reach the conclusion would be a frustrating experience, but the individual portions maintain a consistent level of entertainment, and are very well drawn, so no problem with ABC Warriors. Carry on. 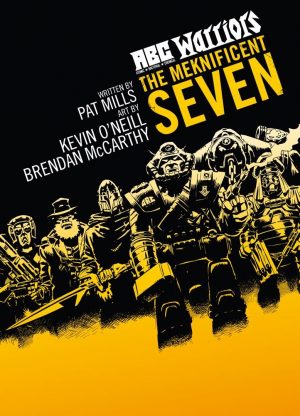 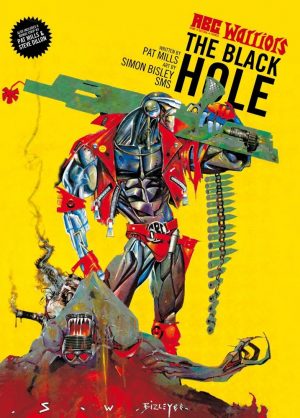 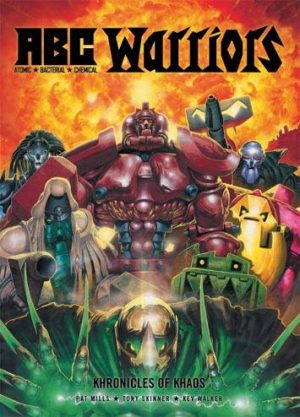 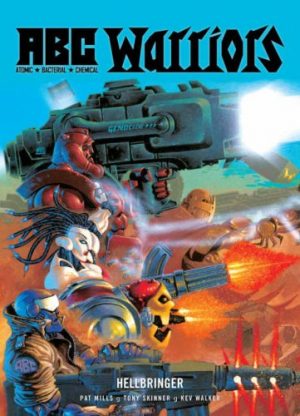