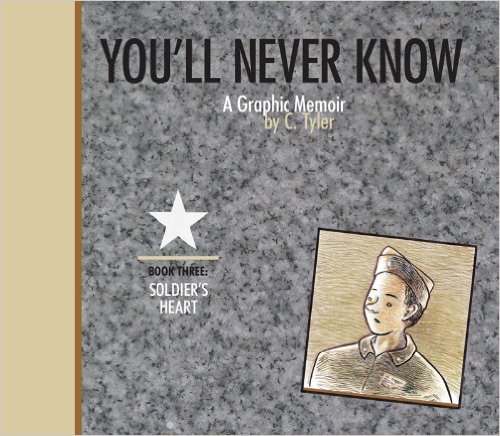 You’ll Never Know began as a book to preserve the World War II recollections of veteran Chuck Tyler, but has inflated into all sorts of other areas, yet following a conclusion to personal events from Collateral Damage, Chuck is back to centre stage here.

We learn a lot of him through small moments: he keeps the car radio on just in case there’s an emergency broadcast from the authorities; he smokes a pipe; he’s carried a photograph of his wife since the 1940s; he’s kept a gun in his car for years. These moments are coupled with melancholy anecdotes regarding his lack of graceful concession to age, a refusal to admit, for instance, that tramping asbestos around the house might in any way be dangerous.

There’s been an experimental progression to Tyler’s storytelling methods, originating with the idea of an illustrated scrapbook as a family memento cementing her father’s wartime recollections. The first volume, A Good and Decent Man, was relatively straightforward, but now comfortable with the format, Tyler really lets loose. There are several pages of notebook observations during a long car journey, an almost abstract picture by her mother, a Hopperesque painting of a road toll booth decorated for Christmas, and a retreat to black and white for emotional stress and confusion. Plenty of other stylistic twitches make this an extraordinarily visually stimulating book, even more so than the previous volumes.

Tyler suggests slowing down for the notebook section, and she’s right. Her parents’ recollections are jaw-dropping glimpses into another era, particularly those of her mother who’s asked to deliver telegram messages notifying people their relatives had died.

Attempts were made to fill the gap in Chuck’s service recollections via official records, but security concerns contribute to institutionalised inefficiency, and it appears some things will never be revealed. They are though, requiring a startling prod, and given an almost biblical accompaniment, nature providing the appropriate symbolism. It’s not the only occasion here where Carol Tyler appears somehow guided. She takes the advice of a dream to bring a dog into the home, and the dog in turn wanders off to locate the perfect studio space for rent.

Although in some ways a man like millions of others, there are moments when Chuck comes over as a subject for psychological study. Late in the book he notes how the death of one daughter at an early age was the worst experience he ever had to cope with, yet from what’s presented in You’ll Never Know, he’s actively worked at alienating a daughter who lives. Is this a method of forestalling more pain? We’ll never know.

Chuck’s isn’t the only tragedy related here, and there’s a searing honesty throughout. Tyler is particularly indignant about a lack of general understanding and compassion when it comes to mental illness, and rightly so.

All three volumes of You’ll Never Know are now collected as single oversize slab, confusingly also titled Soldier’s Heart. The term dates back to at least the American Civil War, and refers to the condition we now label Post-Traumatic Stress Disorder. While the condition was known for centuries, it took the classification to ensure an attempt at treatment. It’s hoped that the new edition sparks some greater recognition of a phenomenal achievement that’s somehow rather slipped under the radar of the graphic novel reading cognoscenti.