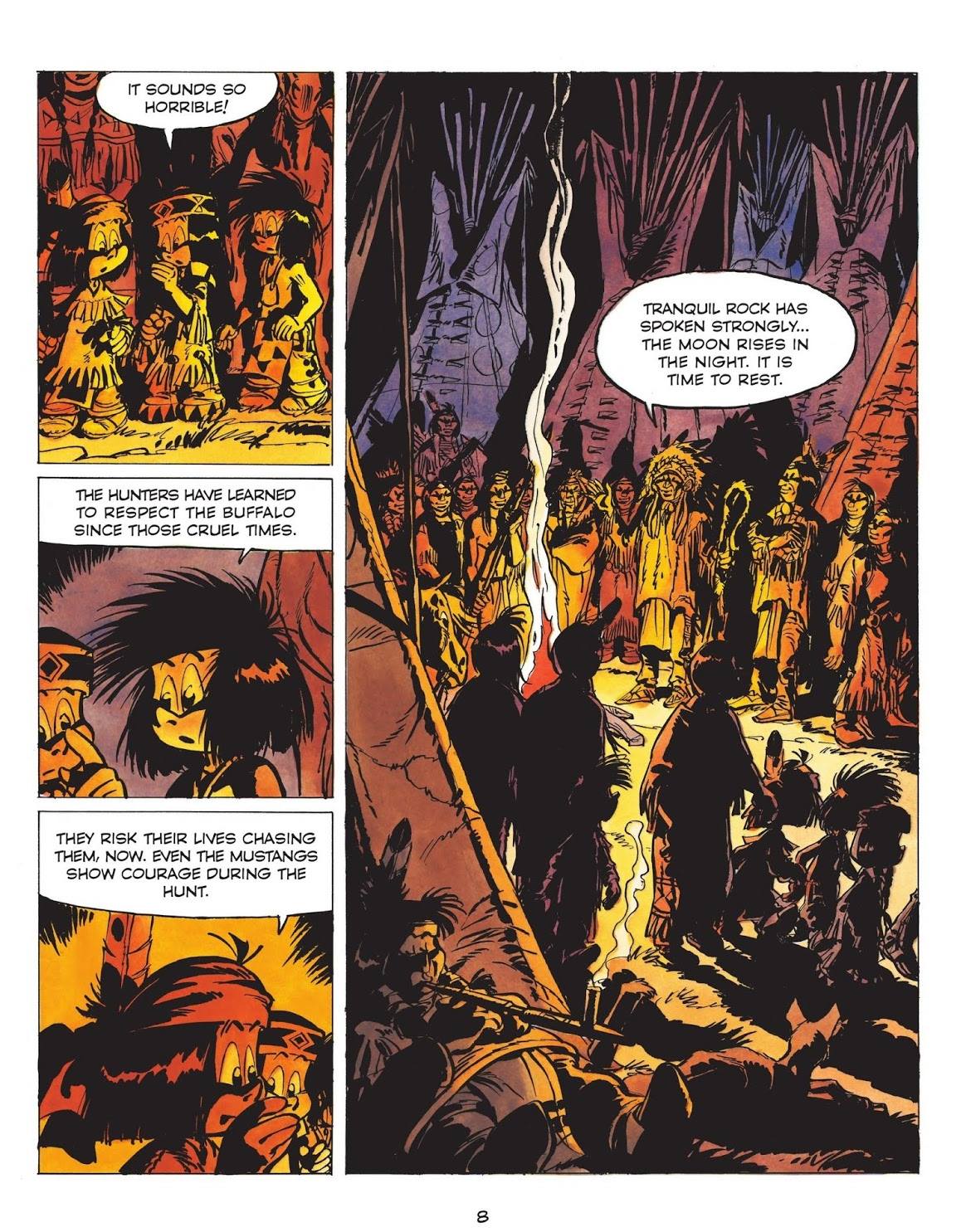 Lords of the Plains begins with outstandingly drawn scenes of a buffalo hunt as Yakari’s tribe harvest the animals in preparation for winter. That evening around the camp fire, the tribal sage Tranquil Rock recalls a time when their ancestors hunted too many of the beasts and exhorts the people to hunt only what they need. As Yakari dreams that night, the spirit of Lady Buffalo appears to him. Fascinated by the experience, Yakari and the mustang Little Thunder head out to see buffalo outside the hunting context the next morning. On the way Little Thunder meets a friend from Little Thunder’s Secret, so Yakari wanders off to give them some privacy. A series of events leads Yakari to the Buffalo herd where he learns their life cycle from various members of the herd. Yakari has only ever known the Buffalo’s worth as food and clothing, but when a vindictive wolf threatens a cow and her calf Yakari finds himself trying to save the life of this noble beast.

Lords of the Plains is a blend of adventure, history and ecological message. The themes of life and death feature heavily, and writer Job sensitively handles the material while retaining honesty about the dreadful realities of it all. Similar themes of sustainability, of taking only what you need, flow out of the First Nation philosophies on nature and it’s well researched. It avoids being preachy by keeping the usual format of animals in trouble recruiting Yakari’s help with a surprisingly tense plot. Artist Derib captures the setting with large panels and intersecting artwork, filling the pages with buffalo. There are bison butting heads, grazing, resting on the ground and running, in some instances over fifty animals occupying a frame, while that earlier Buffalo hunt features spectacular scenes of racing horses and daredevil hunters. When it comes to Yakari communicating with the herd and seeing them in their natural habitat, Derib crafts an undeniable intimacy in the interactions through a clever use of colours and shading to both create tension and heighten grandeur. He gives his animal cast wonderful expressions and it’s a great bit of cartooning. There’s a gentle poignancy that settles on the reader as we see these masterfully rendered herds of an animal covering the page only to remember that they were driven to near extinction by the greed and carelessness of advancing “progress”.

The album obviously features hunting and this can be a very sensitive subject for British readers, so it’s worth a reminder that this is set within a historical context when hunting was a necessity, not a privilege of the wealthy. Think of it as a child-friendly nature documentary that opens the door to all kinds of ethical and moral discussions with children. The series continues with The First Gallop.