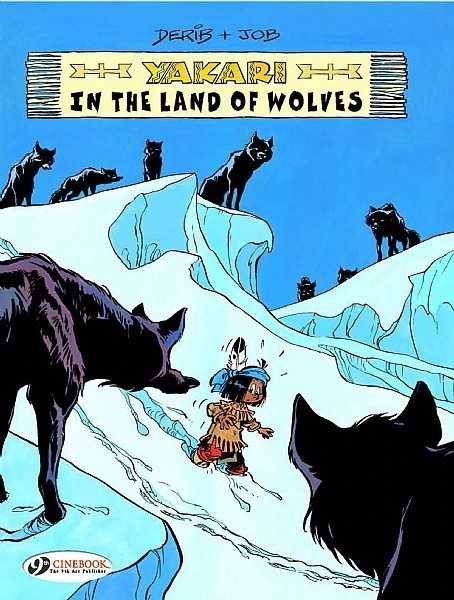 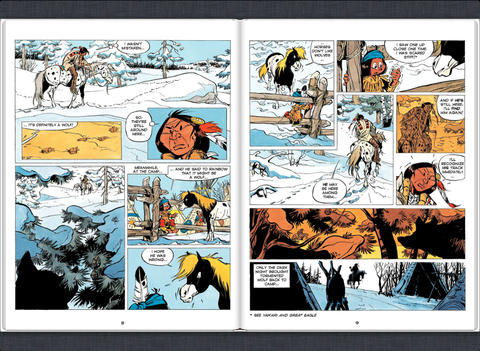 Yakari in the Land of the Wolves is actually the eighth adventure for Derib and Job’s plucky little Sioux boy able to talk to the animals, Cinebook printing this beauty as their sixth instalment. Yakari’s tribe has moved closer to the woodlands for the winter, but as the snow falls one of the hunters, Tormented Wolf, becomes preoccupied with wolves. When Yakari comes face to face with a limping wolf and tells his friends Rainbow and Buffalo Seed, Tormented Wolf overhears and becomes obsessed with hunting the limping wolf, leaving frightened children and concerned tribal elders behind when he heads out after it. Then Yakari has a dream that the wolves and Tormented Wolf need his help to bring peace to the area.

The most immediately noticeable aspect of any Yakari book is Derib’s gloriously beautiful artwork, here with scenes of falling snow, campsites in the freezing night, wonderful flashbacks and vivid dream sequences. There is a vitality that flows throughout the story, an eerie atmosphere creating a dark tension in the struggle between man and wolf, the wolves and the Sioux warriors having a noble gravitas to them. Night sequences are among the best in a book of stunning artwork, largely thanks to well placed airy frames of widely varying sizes.

Job’s plot is wonderfully paced, the story helped by reversing the roles of adult and child. He doesn’t realise it but Tormented Wolf requires Yakari’s help, moving the emphasis beyond Yakari speaking to animals to animals asking him to help humans. There is also a great deal of wonderfully rendered action throughout in a style redolent of Sioux legends. In Yakari and Great Eagle and Yakari and the White Buffalo, it was the mystical elements that raised them to outstanding, and it’s much the same here with dream quests, rites of passage and deep themes of purpose and redemption. Yakari in the Land of the Wolves is, simply put, stunning! It is beyond a doubt a wonderful example of what an all-ages book should be, its adventure bound to entertain boys of every size even the ones with hair in funny places.

Yakari’s next adventure follows the original chronological order, leading directly from Land of the Wolves into The Island Prisoners.