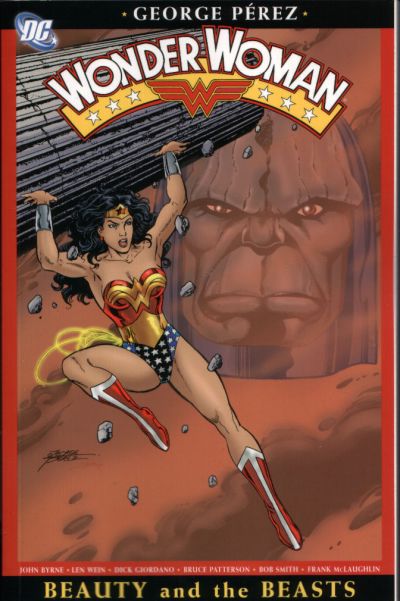 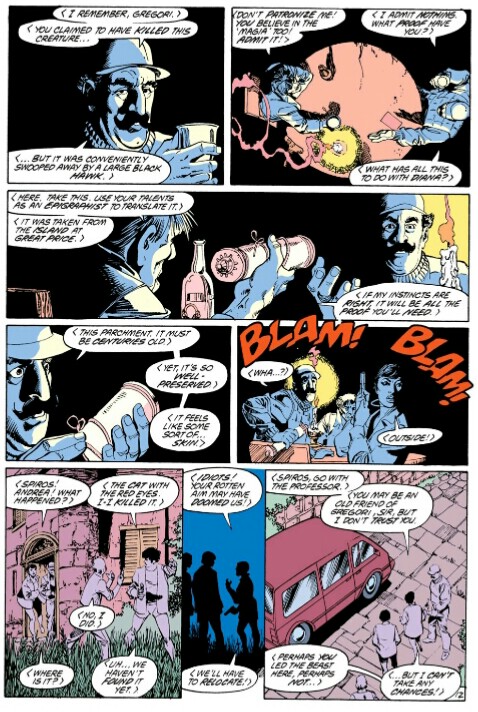 The third volume of George Pérez’s Wonder Woman run starts to show signs of diminishing returns. It adopts the same formula as the previous volume, Challenge of the Gods, of a battle with a reimagined old Wonder Woman villain, followed by a mythological tale, but it’s as if all Pérez’s best ideas were used in the first year, and in 1988 he seems unsure where to head next.  The revamp of the Silver Swan in the opener is similar to the revamp of the Cheetah, whilst the subsequent mythological story, pitting Diana against the witch Circe, lacks the power of her confrontation with Ares or the ‘Challenge of the Gods’. Neil Gaiman handles stories set on mysterious Greek islands rather better in Sandman: Brief Lives.

It doesn’t help that this is the point at which Pérez chooses to take full creative control, also providing the dialogue. He’s not bad, but he doesn’t quite have the same way with words as Len Wein.

This is also the point where the art stops being what it once was. This is understandable. In the first year, Pérez was taking the sort of time over the artwork that was only sustainable if he was making a lot of money from it. Though his Wonder Woman was selling well, it wasn’t selling enough to earn royalties, and Pérez found he could no longer afford to devote as much attention to the artwork. There’s a distinct looseness to the pencils here, and this is not helped by the loss of Bruce Patterson, who had inked the whole first year. Some of his successors rather swamp Pérez, most noticeably Dick Giordano, an inker with a very distinct style of his own (see sample image).

Still, for an example of how bad things could be, in the middle of this volume there’s a tale teaming Superman and Wonder Woman, written by John Byrne, and pencilled and inked by Pérez over Byrne’s layouts. Byrne’s Superman shows him at his bombastic worst, and this is no exception. Multiple  panels  just feature a character’s head delivering a long speech breaking the 35 words per panel rule by quite some way. Byrne addresses the potential Superman-Wonder Woman romance that some fans seem obsessed with. This always tends to be awkward – Mark Waid makes the best fist of it in Kingdom Come – but here, even by normal standards, it’s crass. And Byrne’s Darkseid lacks the finesse of either Jack Kirby’s, or Paul Levitz’s in The Great Darkness Saga. Curiously, Pérez features this episode on his new cover for the volume, and it  leads to developments he was evidently planning for the main series, but it’s a blessed relief to get back to Pérez’s own vision.