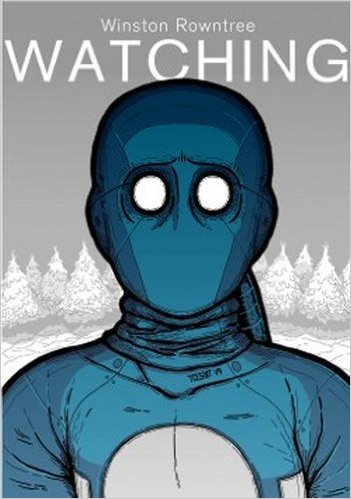 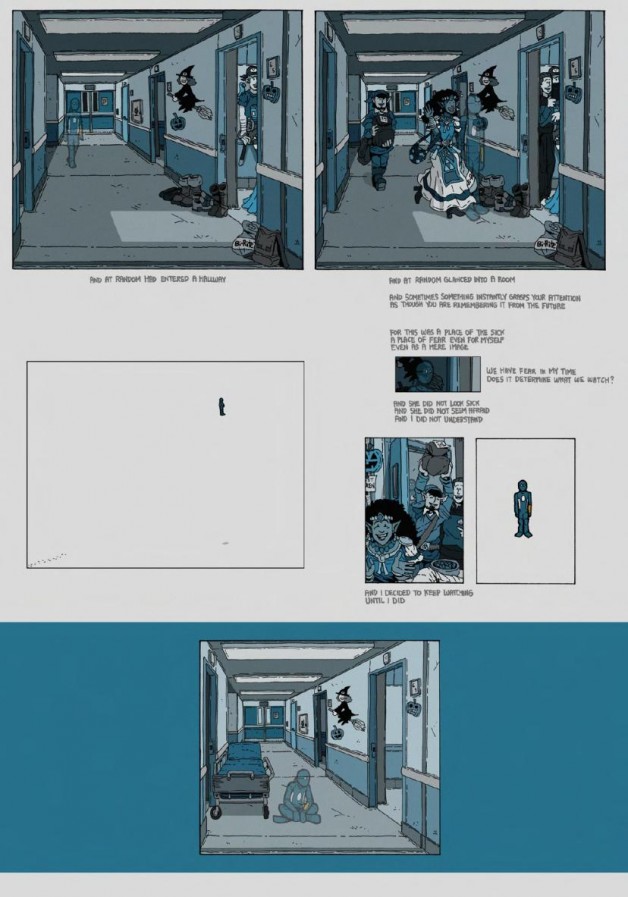 Watching is a graphic novel that provokes very different reactions. Some people obviously love it– in 2015 it won Slate’s Cartoonist Studio Prize for Best Web Comic – but it’s opaque. It was first published as an episode of Winston Rowntree’s Sub-Normality web comic, and is now available from Soaring Penguin as a physical book.

The art is beautiful, while simultaneously not always feeling  like conventional comics. There’s no dialogue or sound effects; instead there’s a narration that accompanies the illustrations, rather than being integrated with them (see sample image). This shouldn’t detract, however, from Rowntree’s lovely, expressive faces, detailed backgrounds, and interesting layouts. The colouring – mostly shades of blue – is subtle.

The art, then, is not the issue with the work. The problem is with the story, which, whilst not utter rubbish, is very slight. In the far future, at least a thousand years, people can travel back in time, but only to observe, and cannot themselves be observed. Most people choose to visit famous historical moments, to settle great questions of the past – there’s a funny panel of time travellers measuring the height of Napoleon (6′ 2″, since you ask). The central character of Watching, however, decides instead to observe a young girl dying in hospital. And because he doesn’t understand, he watches her die all over again. And again.

By the conclusion, it’s not really clear whether anyone, either in the story or reading it, is supposed to have learnt anything. The reader’s perceptions on life have not been particularly changed or challenged. So what is this story about? It’s difficult to know. Like the narrator, the reader has watched, but they don’t understand.

This shouldn’t be taken as a reason to avoid Rowntree’s work. Other strips on Sub-Normality appeal a lot more, but Watching just doesn’t hit the mark.