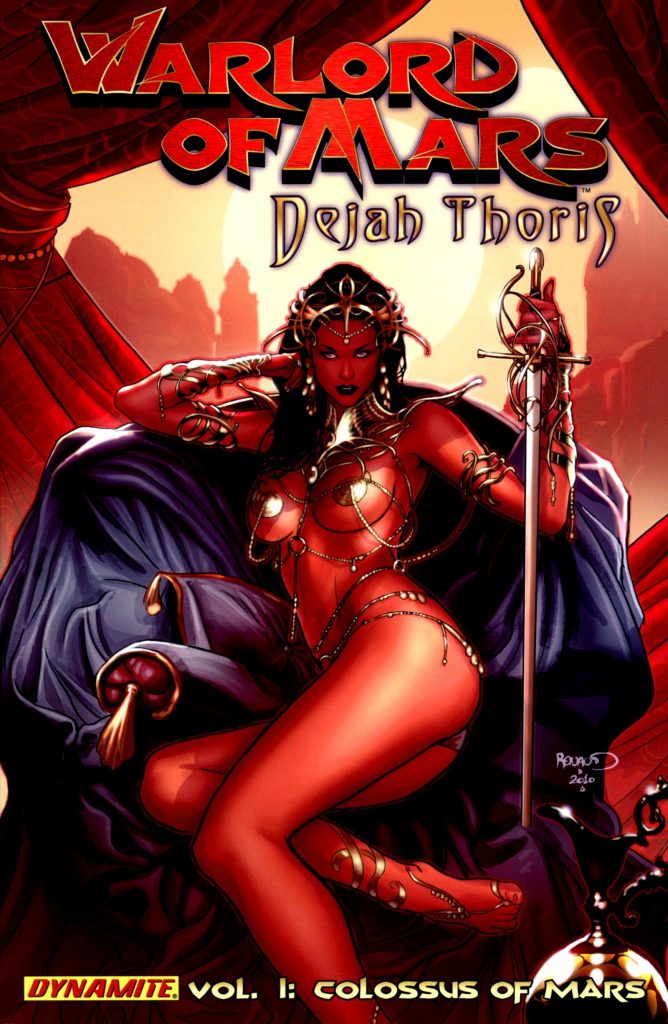 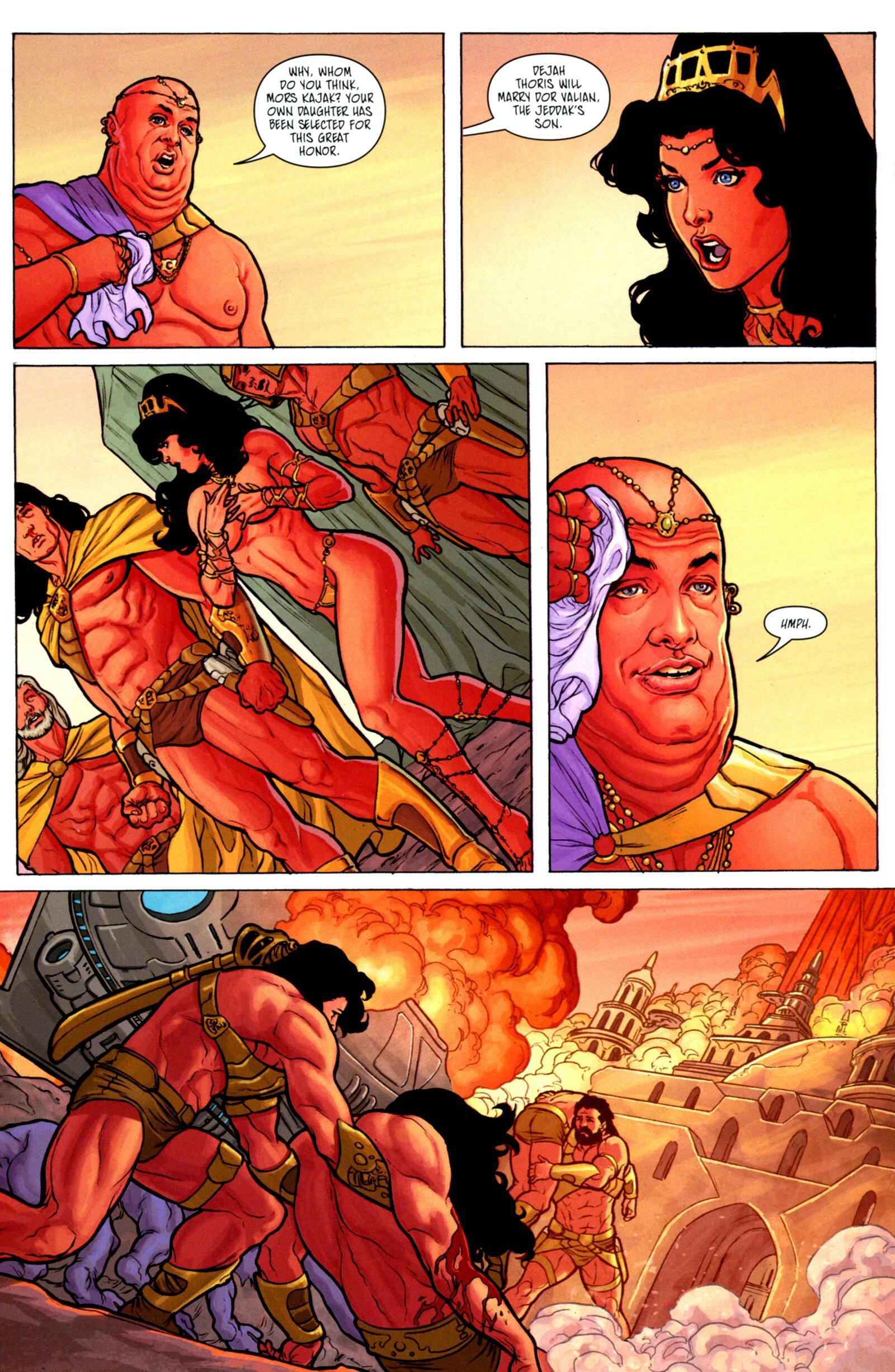 In the 21st century there’s a problem with Dejah Thoris that we might as well address to begin with. Although Edgar Rice Burroughs was 37 when he created the character in 1912, it’s very difficult to see anything other than a sexual fantasy, in more repressed times, of someone described in her first appearance as an alluring naked woman. This was justified by the customs of her people as a sensible reaction to the hotter climate of Mars, and also applied to the men, but they’re just the background characters. Despite her early appearances noting her warrior credentials, she was characterised as a woman who needed rescued by John Carter, and while haughty, enjoyed his attention. Being visually faithful to Burroughs’ description while also ensuring maximum distribution without offending community standards means Carlos Rafael’s depiction is of a woman wearing only a thong and jewellery covering her nipples. It’s objectification, and to some people it’s going to be offensive.

Dejah Thoris and her people are extremely long lived, and this series of adventures written by Arvid Nelson looks back at events in her life long before John Carter arrived Mars, opening here 437 years beforehand. Since time immemorial the cities of Greater Helium and Lesser Helium have had disagreements that sporadically break out into war. The latest is about to result in victory for Lesser Helium when Colossus of Mars opens. Any pride doesn’t last long.

Nelson weaves his story around historical details passed on in Burroughs’ novels, adding flesh to the bones, so to speak, involving an ambitious Jeddak (equivalent to a king) intending to release an ancient terror, the Colossus of the title. The emotional underscoring is provided by his scholarly son, considered a disgrace in a warrior society, who’s been deceived and betrayed.

A quick glance at any page shows Rafael to be an artist at home with laying out a story to good effect. His figurework doesn’t match his layouts, however, and characters are often twisted into strange poses unsustainable via human anatomy. Considering Dejah Thoris has breasts on display at all times, Rafael appears to have little idea as to how they’d actually move.

Reservations about a faithfully presented Dejah Thoris are emphasised by her use. We do see her as a warrior, but not before she’s been captured, freed by a man, and for two-thirds of the book she’s just one member of an ensemble cast. Apart from an element ordering her marriage there’s not a single other part of the plot to that point where her purpose is unique, where only Dejah Thoris can solve a problem or execute a mission. There are also strange lapses. A villain is in great and inexplicable pain ending one chapter, yet restored to perfect health by the next with the subsequent explanation late in arriving. The better parts of Nelson’s plot are fostering constant tension between lifelong enemies even when its in their best interests to unite, and the eventual revelation of Dejah Thoris’ heroic character. It comes with a good visual effect and leads to an interesting tactical battle. Overall, however, the average well outweighs the good.

Earlier stories of Dejah Thoris continue in Pirate Queen of Mars, and both books are also gathered in volume one of the 460 page Dejah Thoris Omnibus. 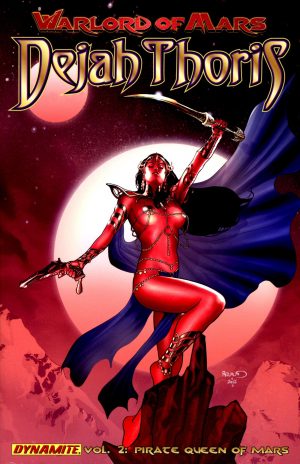 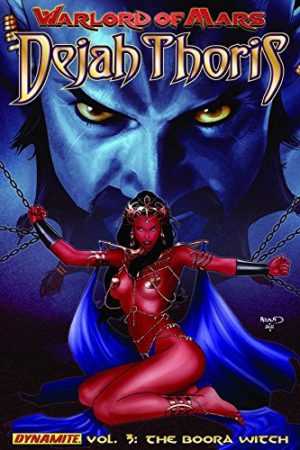 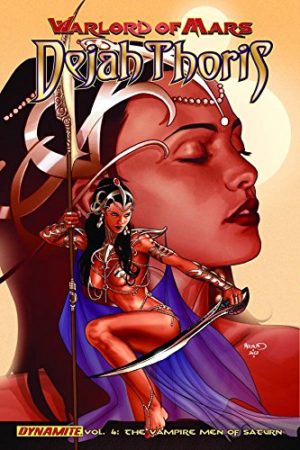 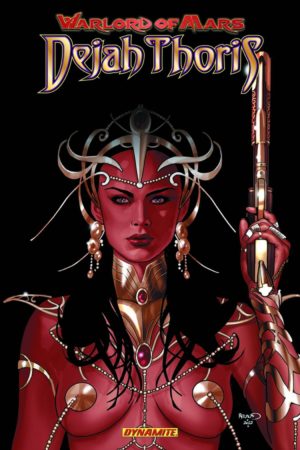