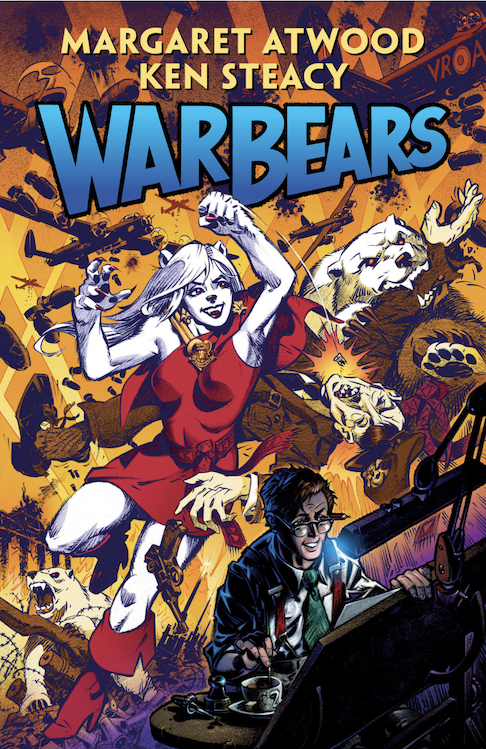 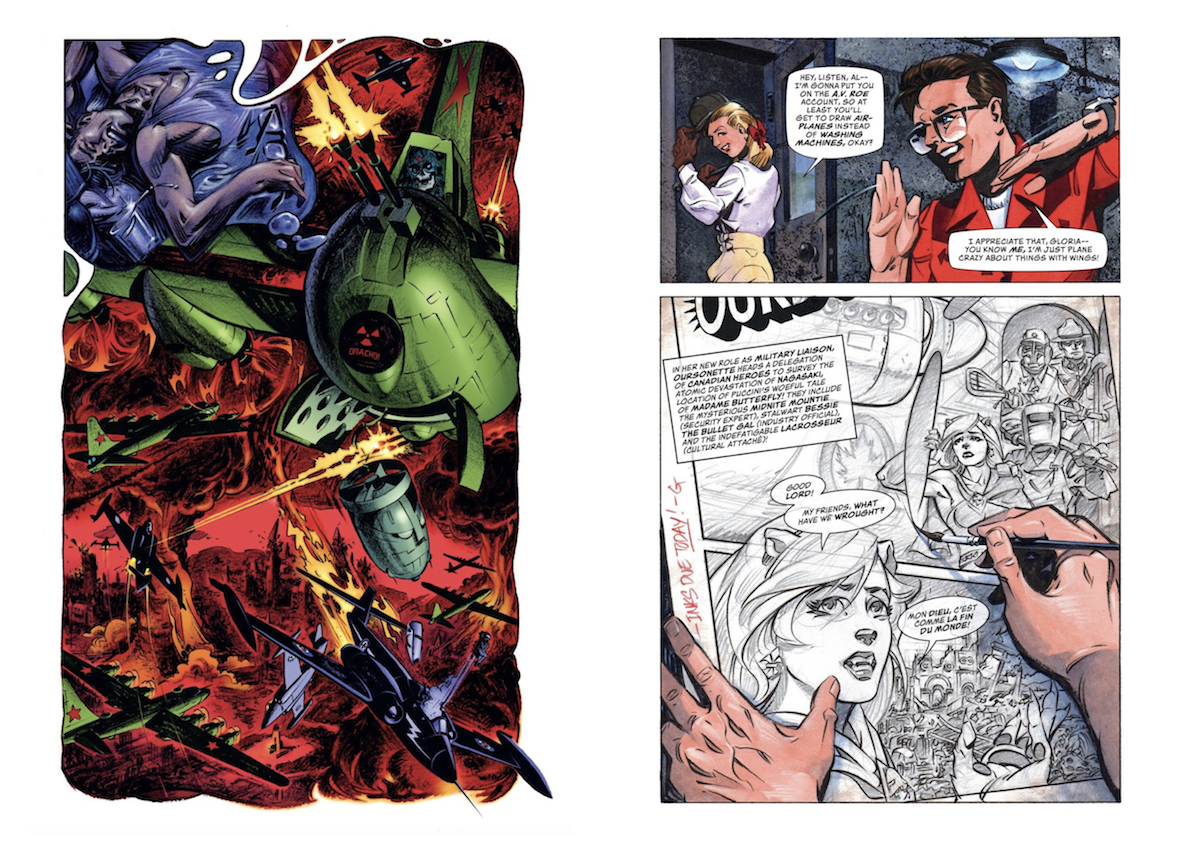 Many readers will be excited to see The Handmaid’s Tale author, Margaret Atwood’s name on an original graphic novel, though perhaps less so amongst those who read her debut, Angel Catbird.

Like the former book, this channels Atwood’s childhood love of comics, specifically the Canadian comics that emerged in the absence of U.S. imports during World War II. This examines the fictitious Toronto based Candoodle Comics, and their character Oursonette, a ‘were-bear’ able to conjure two ursine sidekicks, together the War Bears of the title.

The real origin of Oursonette, as Atwood’s introduction notes, is in the Canadian 150th anniversary celebrations. National newspaper The Globe and Mail commissioned fiction authors to write a story around a date in the country’s history. Atwood chose V.E. Day when the Allied forces declared victory over the Nazis. The paper also commissioned spot illustrations by Ken Steacy, a comics creator turned educator and WWII buff, and subsequently the pair agreed to collaborate to turn Oursonette into a graphic novel. It’s a laudable move from the esteemed and thoroughly sound Atwood.

The problem is that her original story is so complete and compact in itself, and its inclusion here taunts that fact. On V.E. Day, Oursonette creator Al walks through the celebrating crowds, lost in his thoughts, before joining his Candoodle Comics colleagues: boss Gloria, and veteran artist Mike. It’s a bittersweet moment for them, as they contemplate the return of U.S. imports, and the implications for Canadian comics. As with other Atwood short stories, brevity and omission are strengths.

That VE Day scene makes up most of War Bears‘ final third. The preceding two instalments develop the characters towards that, starting with Al and portfolio arriving at the Candoodle offices. Atwood’s introduction describes it as a “collaboration, although the main work on the script” was Steacy’s.

Additions don’t alter the story as Atwood originally told it, but develop the characters, and so reader investment in the outcome. Gloria as an empowered woman in a man’s world was already implied, but is credibly expanded. Newcomer Al is the access character, finding out about Candoodle as proxy for the reader. He’s like the pre-Captain America Steve Rogers, and characterised by bloke-ish colleague Mike as “a pantywaist”. We don’t learn much more about him beyond the predictable such as fears for those in the war (pictured, left) and guilt for being safe at home. Stalwart artist Mike is most interestingly developed, his antipathy towards the new kid moving from cliché to revelation, with clues reinterpreted in hindsight. Interesting contextual details like Canada’s ethnic/cultural mix, and contribution to the war effort, are woven in seamlessly, while a new coda is satisfying and well observed. Despite all this, one could still argue the book is tampering with a ‘perfect’ original. However, that could be said of any adaptation, and here, unusually, it’s with the involvement of the original author. Where the graphic novel most significantly adds to the original is the development and depiction of the story-within-the-story of Oursonette .

Ken Steacy solidly illustrates the Candoodle team and their interactions, painting over his stylised drawings in naturalistic colours. The splash pages (of the three original issues) with an imagined Oursonette amongst the everyday scenes, are striking. The black and white pages of Oursonette comics, and Al at work on them (pictured, right), elevate the visual experience, and justify the whole project.

Is this the great literary graphic novel some will be expecting? Perhaps not, but it’s a good story, well visualised, and with fascinating insights into Canada and its early comics. 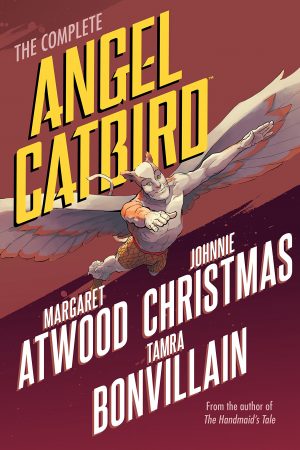