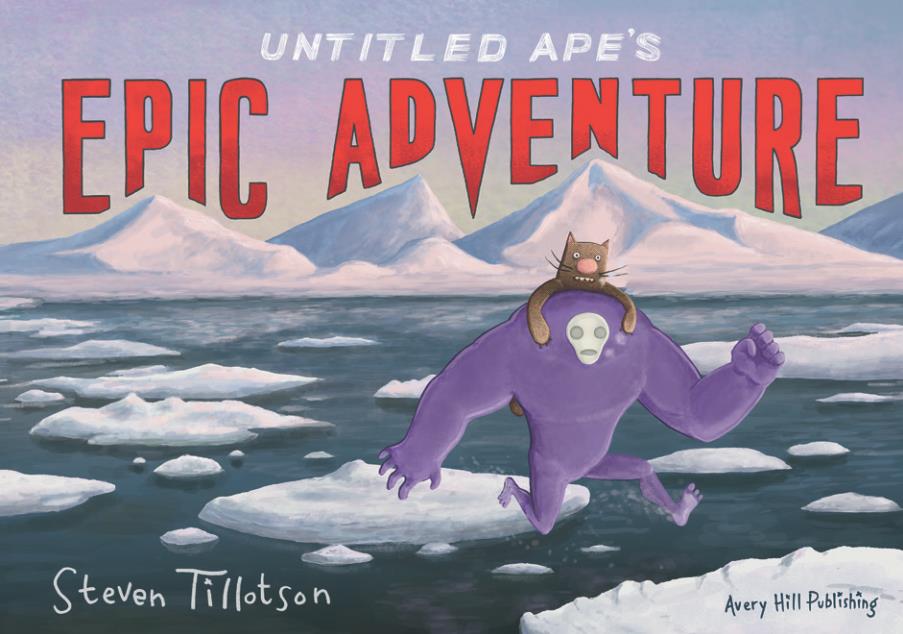 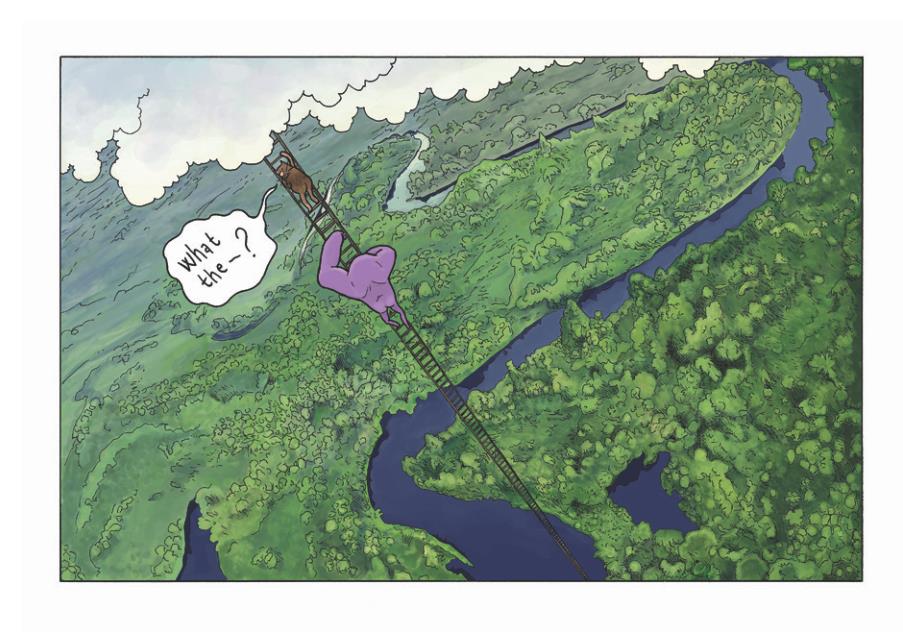 For much of Untitled Ape’s Epic Adventure puzzlement and confusion are the abiding feelings as the surreal and the inexplicable are the order of the day. Steven Tillotson, however, is such a diverting storyteller we’re entertained enough with the crumbs thrown and the whimsy on offer that the bigger picture can happily hang in the background.

The prologue shows a ghost elevating to the planet’s surface before morphing into a great purple ape. His first encounter involves a display of strength as he retrieves a packet of cigarettes for a coarse cat. They fall into each other’s company as a flood of biblical proportions develops. The untitled ape feels his family is endangered in the jungle and his duty is to help them, and the cat tags along, resourceful, yet seemingly without greater purpose.

Around the halfway point we discover the ape has a name, and a past. There are sinister parties very keen to see that past become his future also, and ruthless in their coercion. This, though, is never violently depicted, instead supplied by sly implication and off panel action. It’s with these sections that the story moves slightly away from its all-ages veneer, and further with a brief glimpse at what’s either depression or addiction.

In 2012 Tillotson was the runner-up in the annual Observer/Jonathan Cape short story prize with a tale about yeti that can be read here. The yeti and mammoth featured are returned among the many other odd creatures met along the way, almost universally friendly and helpful, if sometimes in oblique or random fashion.

There’s a welcoming simplicity about the cartooning. The cat vaguely resembles archetypes familiar from TV animation, and the ape brings to mind the cigar-smoking robot from Aama of all places, with its blank yet somehow expressive face. There are also touches of Edward Gorey, both in the overall outlook and some of the Victorian style embellishment, and for a single page Tillotson slips into an impressive cartooned version of Bosch’s torments of hell.

Tillotson has a great talent for indulging the whimsical, and time after time there’s an answer to a hanging question that richly rewards with a smile. What is it that the yeti has to do? How does the cat come back with beer from the top of the mountain? Eventually one quest becomes another and a final surprise awaits our ape.

It’s almost impossible to resist searching for allegory in Untitled Ape’s Epic Adventure, but ultimately the oddness is just that with no greater meaning. Tillotson has no axe to grind nor a point to rub in our faces, leaving the journey of a pleasant gentle giant again finding his way in the world. It’s a testament to the values of loyalty and friendship that’ll charm, surprise and amuse, and isn’t that enough?