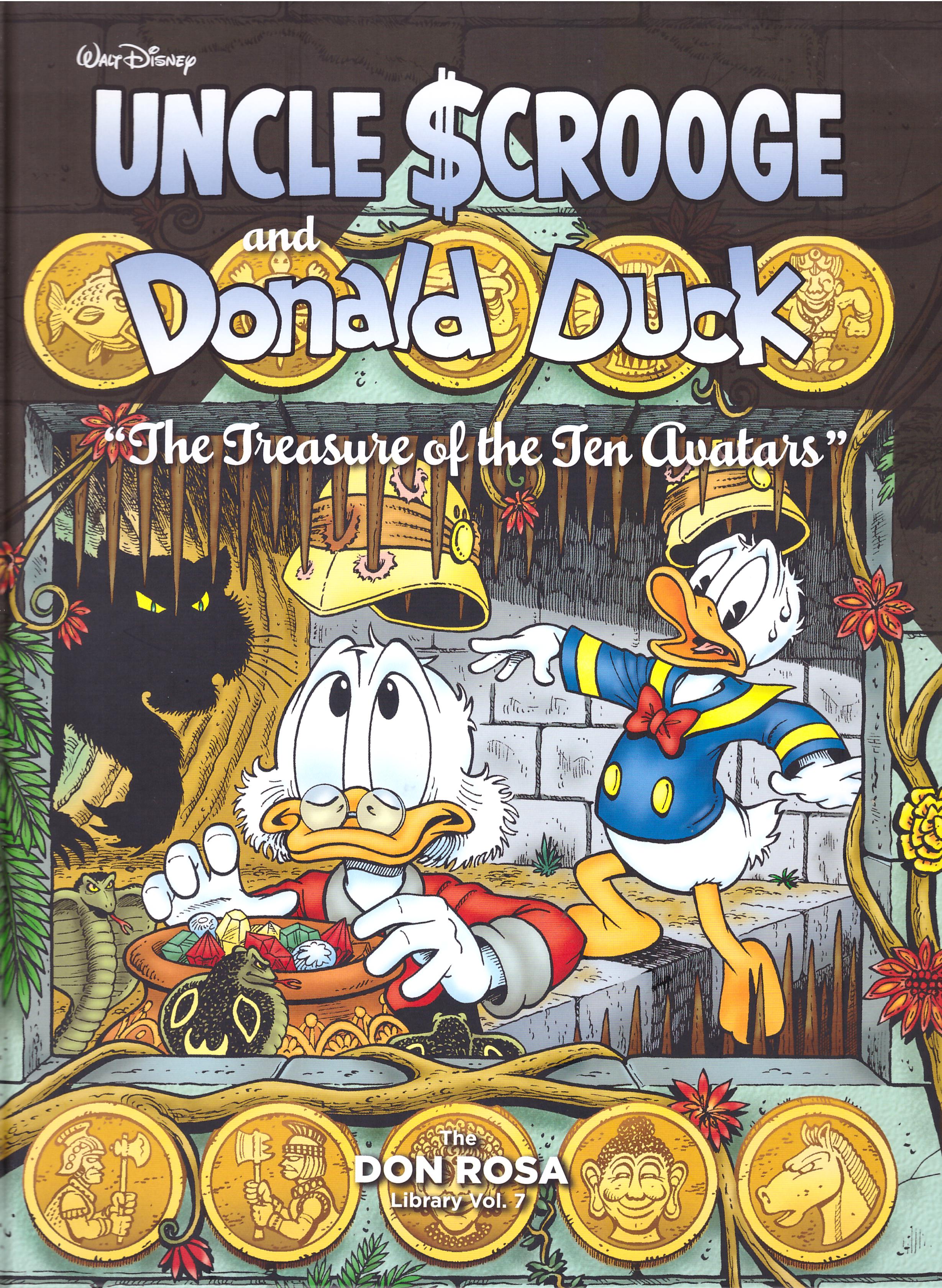 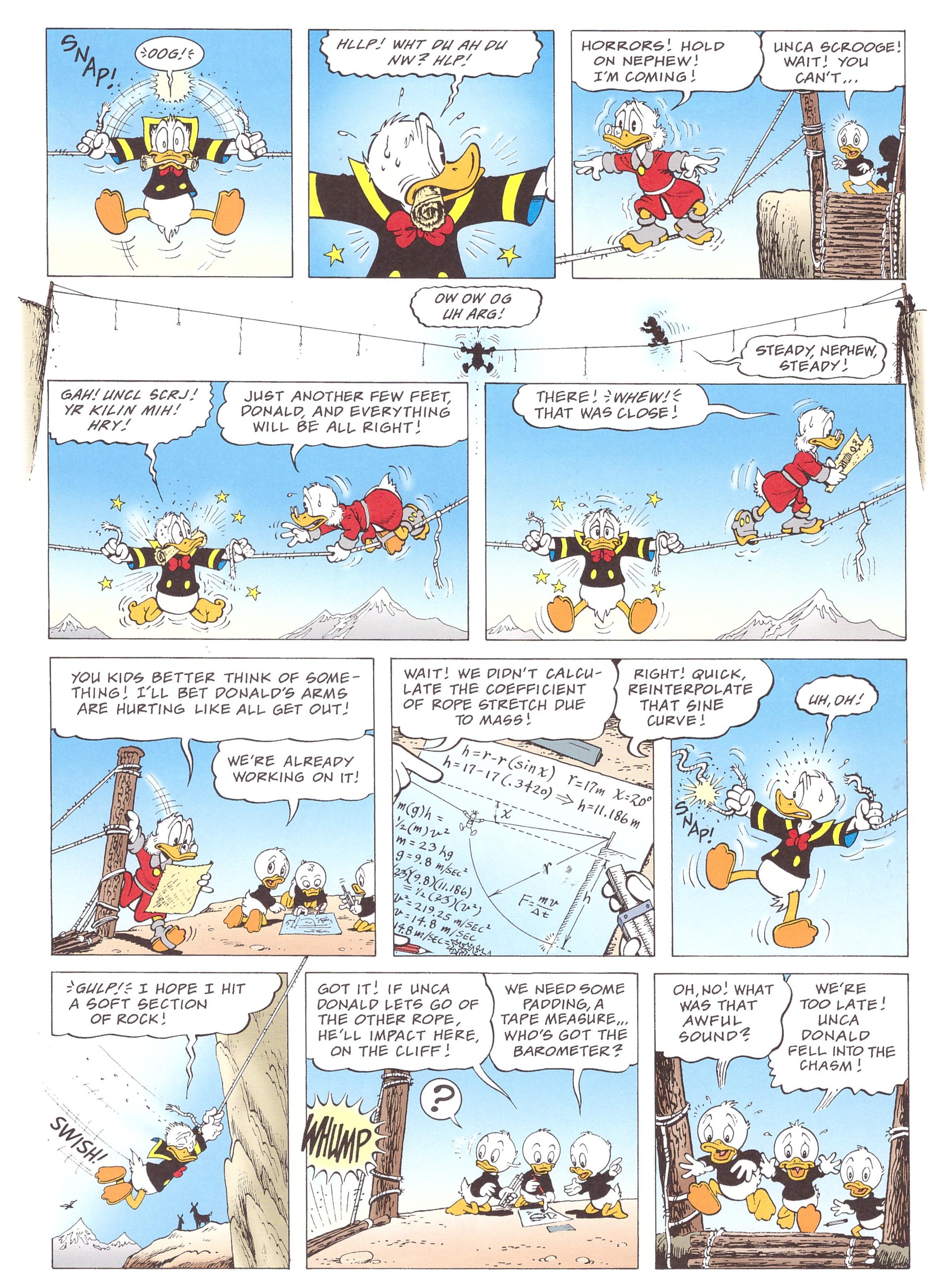 What a phenomenal collection of stories this is. There are two fantastic treasure hunts, one in India, one in Colombia, Don Rosa’s story celebrating the 50th anniversary of Scrooge McDuck, possibly the strangest story he wrote for Scrooge, a brilliantly conceived gimmick tale, and another look at Scrooge’s past.

The only slightly weak spot is the opener. Rosa sends the ducks back to the time of King Arthur, but then doesn’t have any real idea what to do with them other than complicating their efforts to return to their own time. It’s a pretty good story, but lacks the inspiration of the remaining content. An indication of how good that is being even Rosa’s introduction and notes indicating he’s pretty happy with it for once.

‘Attack of the Hideous Space Varmints’ is the really strange tale, taking Scrooge, Donald and his nephews deep into space to meet aliens. It starts nicely with Scrooge activating a homing device that sends his money bin floating into space, but even then he doesn’t consider it lost, and gives chase. A nice twist is the ducks being the hideous characters of the title, and Rosa has Scrooge charmingly rediscover his youth and his zest for mining, but out in space.

A factor unifying the two treasure hunts is the jokes at Donald’s expense (see sample art), but they’re differed by imaginative story devices. In the title story temple guardians have ensured traps await the unwary, and the only way to avoid them is the correct activation of a series of buttons picturing the ten avatars. Looking for the legendary lost gold of El Dorado is a matter of following and interpreting different clues, with the ducks all the while being tracked by Flintheart Glomgold. Rosa initiates his involvement brilliantly, and includes a couple of great scenes toward the end playing on Scrooge and Glomgold’s rivalry.

Glomgold’s already been seen in this collection, uniting for the first time with Scrooge’s other great enemies the Beagle Boys and Magica De Spell as Duckburg celebrates fifty years since Scrooge’s arrival in the city. It’s cleverly identified that each wants to take something from Scrooge, but that it’s different in each case, so joining forces makes perfect sense. The subsequent chaos results in some surreal visual gags, and an end to the action that’s almost something from a superhero comic, but entirely appropriate. The final pages are perhaps a little too sentimental, but, hey, it was Scrooge’s 50th anniversary.

Rosa’s imagination is on full display with a strip where Magica De Spell adjusts Donald and Scrooge’s personal gravity by ninety degrees. It allows consistently eye catching illustrations as they fall over while on the ground, but can walk easily on walls, and have to prevent her stealing Scrooge’s first dime in this condition.

It nagged at Rosa that three details mentioned in Carl Barks stories about Scrooge past in the American west couldn’t be incorporated in his long biographical series, so he constructed ‘The Vigilante of Pizen Bluff’ around them. It’s a cracking adventure incorporating plenty of historical figures along with Scrooge’s Uncle Pothole.

Every book in this series is completed by Rosa’s notes, and illustrations provided for other stories, this time in 1996 and 1997, and to round everything off there’s Rosa’s essay about his joy at being fêted all around Europe for his stories. Of all the collections of Rosa’s work in this series The Treasure of the Ten Avatars is the one that shows him at his best, offering great variety and sustained excellence. Escape From Forbidden Valley is next.