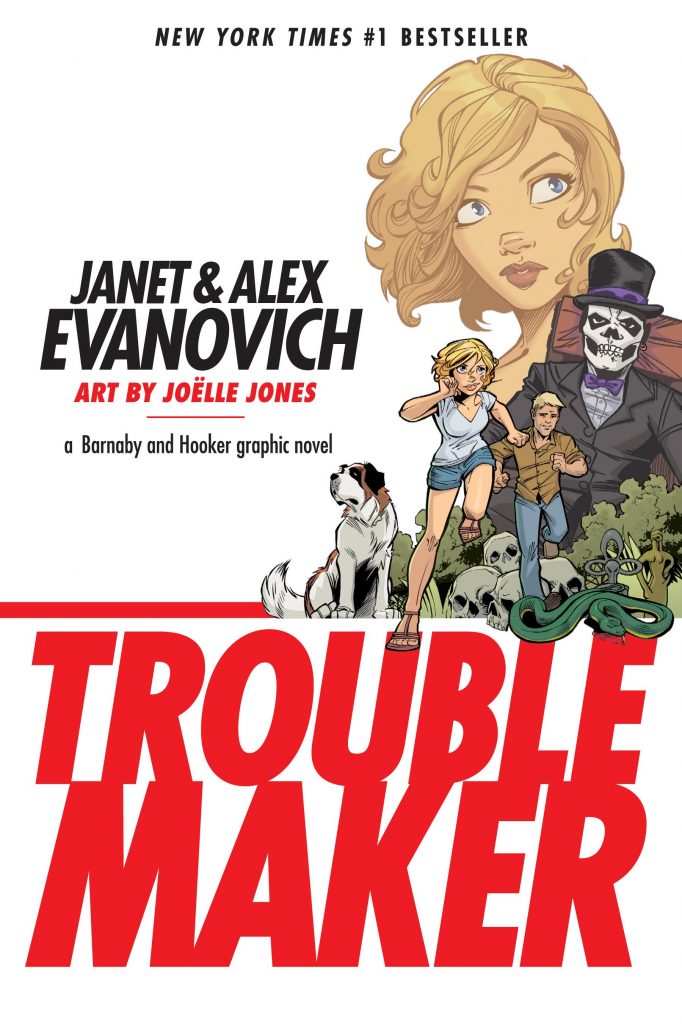 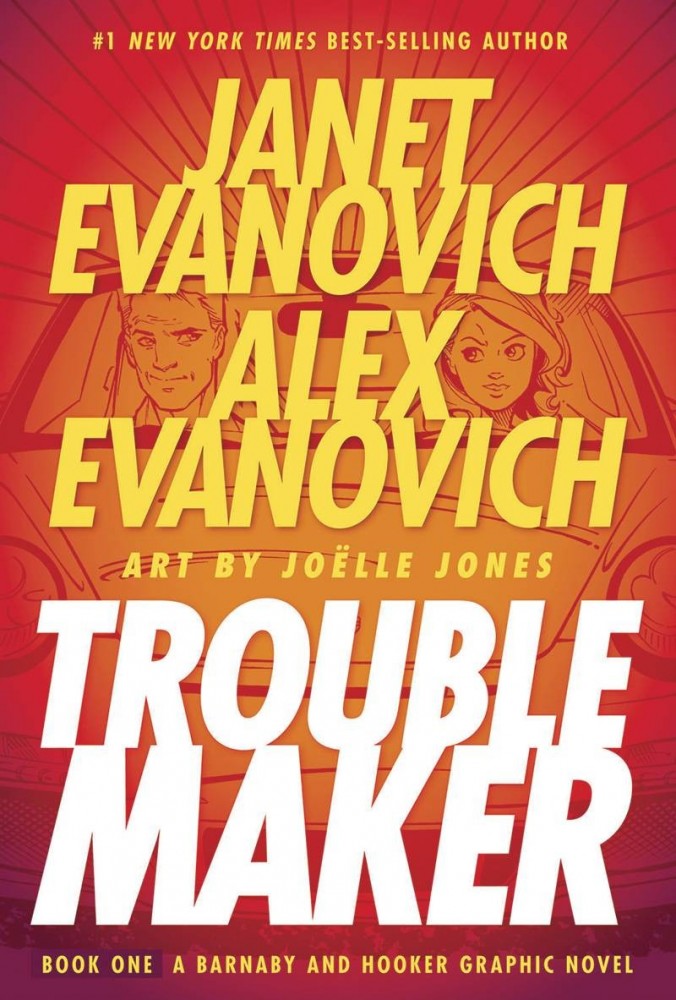 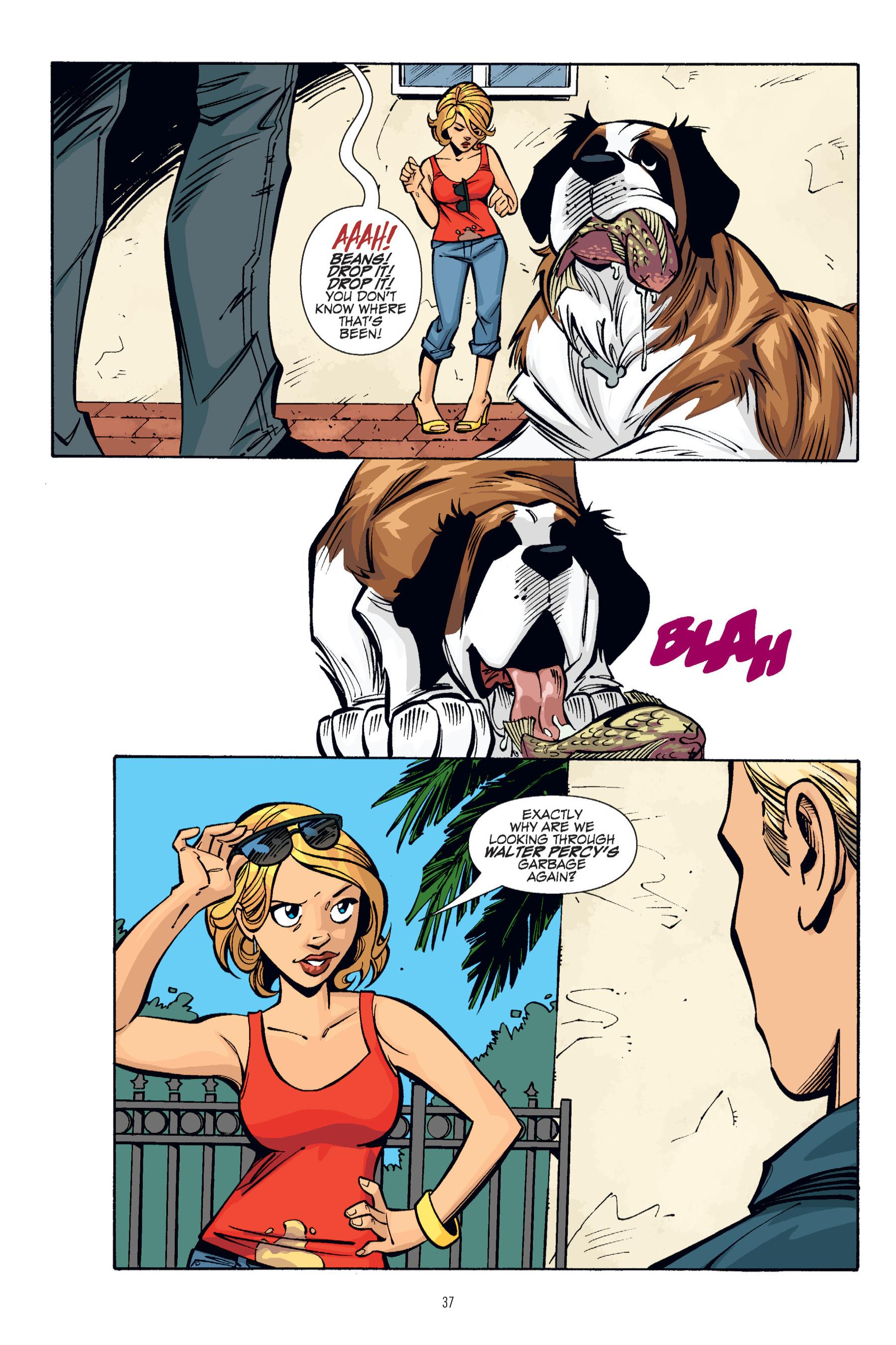 In terms of sheer sales Janet Evanovich numbers among the most popular crime writers currently working, with 28 books in her Stephanie Plum series alone. Troublemaker is her first graphic novel, co-written with her daughter Alex, and following up on the adventures of Alex Barnaby and Sam Hooker as featured in the novels Motor Mouth and Metro Girl. That Dark Horse considered the writer’s popularity would result in a significant influx of people who’d never previously read a graphic novel is indicated by a preface page explaining how to read comics. It notes among other things that not everything is described, as the art can indicate emotion or action.

Sam is a Nascar driver, Alex his mechanic and all-purpose helper, and Beans their St Bernard dog. They’re an eccentric trio with a propensity for becoming involved in unusual situations, and the creators make it as easy as possible for potential new readers with clear cartooning and full page introductions for the prominent cast. The plot concerns the possible abduction of Alex’s friend Rosa. She’s not turned up to the cigar shop where she works, and in her place there’s a threatening note and a voodoo doll.

Troublemaker displays why novels with the Evanovich name are so popular. She adapts well to the graphic novel format, the cast have a light comedy appeal, the surprises surprise, and good use is made of the unknown via the voodoo elements used. For people of an advanced age, the template is that of the Moonlighting TV series, where good faith and adventurous spirit count for more than actual competence. It’s a proven beguiling blend, and Joëlle Jones has the light artistic touch to bring it to life. Bearing in mind the prospective new audience, clarity is the priority, so there are no clever segues or storytelling subtleties, but she’s also astute enough to stop short of the cast mugging at the readers.

The story switches emphasis at the midway point, although in logical fashion, with an associated new mission now a priority, still with a voodoo theme, and incorporating an ingenious hiding place. There’s also quite the darkly humorous side to the writing in the small details, such as Hooker’s boat bearing the same name as the notorious memoirs of a prostitute published in the 1970s.

Anyone who enjoys the finely plotted light comedy of Evanovich’s novels will surely enjoy Troublemaker. Enough people already have to have ensured a Troublemaker 2.