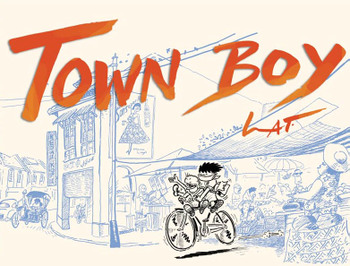 The sequel to Kampung Boy by Lat, Malaysia’s most famous cartoonist, Town Boy continues the autobiographical story of young Lat after he moved to Ipoh for his studies aged ten. His family moved to the town as well and Lat wrote, “We had become town people”. While new adventures beckon for the young lad, readers of Kampung Boy realise Lat never did return to the kampung.

Like the earlier volume, Town Boy is filled with gentle humour (very much like Lat’s own personality) that can still be biting. He declared he loved Ipoh, the cleanest town* in Malaysia. However the * tells us “not any more”.

Kampung Boy is dedicated to Lat’s parents while Town Boy is dedicated to “all my friends”. The appeal of the book is that it is about friendships that cut across racial and ethnic lines. Lat is a quiet student in school, but he became firm friends with a Chinese boy, Frankie because of rock‘n’roll. This is significant because in 1969, Lat and Frankie’s final year at secondary school, Malaysia was rocked by terrible racial riots fought between the Chinese and Malay communities. Lat doesn’t reference these events in Town Boy, but by depicting how both friends helped and encouraged each other about their future plans, he is showing another way to resolve social and racial tensions.

The art in Town Boy is even better than Kampung Boy. There are more details of town life, the shops and the buzz of everyday activities, and a few spreads that capture poetically what being young is all about – Lat and Frankie using brooms to ‘play’ guitar while listening to rock records; both friends walking down the streets in ‘style’ and the pages showing the traditional Chinese coffeshop. You could almost smell the coffee roast.

Like Kampung Boy, Town Boy ends with a melancholic departure. However, as Lat cycles away from the train station, it’s accompanied by a sense of excitement as well, as the teenage Lat embarks his first steps to adulthood.

Like The Godfather Part II, some considered Town Boy to be better than Kampung Boy, richer and more poignant. However, both can be read together as whole – a paean by Lat to those days of being wild and young.