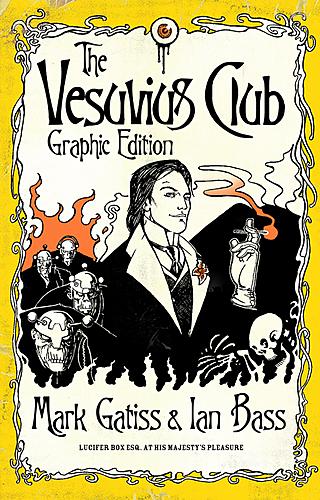 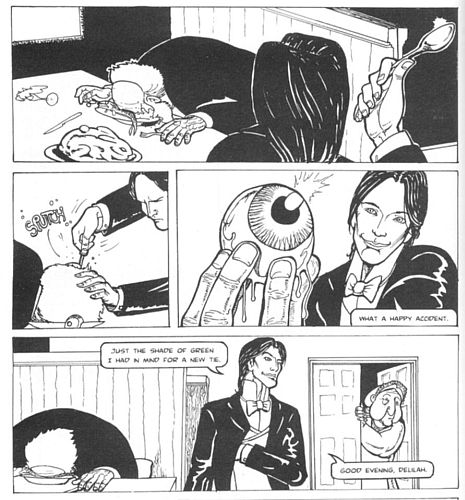 Adapted from his own 2004 book by writer Mark Gatiss and drawn by Ian Bass, The Vesuvius Club tells a story of Lucifer Box, a decadent, bisexual secret agent working for the British Crown at the turn of the XXth Century. Gatiss is a better known nowadays for Sherlock, the TV series he co-created with Steven Moffat, but before that, he’d been a member of the League of Gentlemen and had written and acted for Doctor Who.

In this graphic novel, Gatiss builds a slightly skewed world where secret agents meet in a loo and an original type of zombies roam the night. Not that far from the ambiance of Alan Moore and Kevin O’Neill’s first League of Extraordinary Gentlemen stories, in fact, with the use of period ads for the inside covers another resemblance. Box himself is a portraitist and lives at 9, Downing Street–he probably doesn’t have to worry about the neighbours. He’s also a very competent and amoral secret agent who finds himself on the trail of the murderers of a bunch of vulcanologists. This trail leads him to Italy and the arms of Charlie Jackpot, a young hunky servant begging to be removed from the service of an old fogey. Box is more than pleased to help a young man in distress…

Ian Bass’s art is a lot of fun. He has an attention to details that helps realise Gatiss’ vision and his style is a good balance between realism and cartoony. The way he draws faces, and especially eyes, is reminiscent of early Barry Windsor-Smith.

The tone of the book is rather light, even in the more sombre or action parts, but the humour isn’t forced. The Vesuvius Club is an entertaining read and readers who enjoy it might want to look for the original book, which is even better, as well as for the two (prose) sequels, The Devil in Amber (2006) and Black Butterfly (2008).