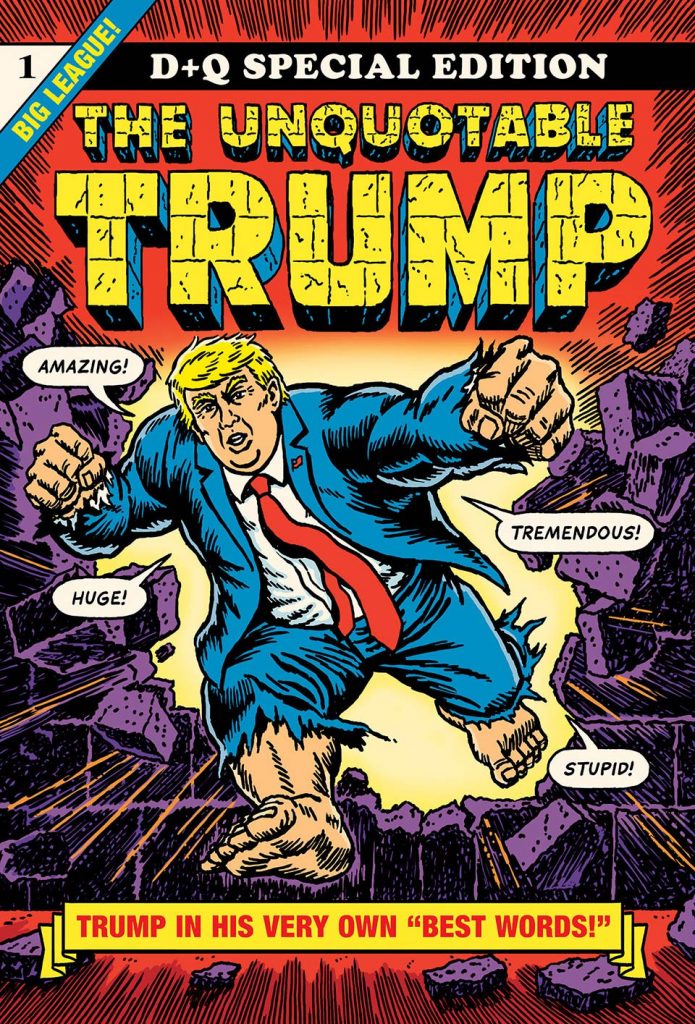 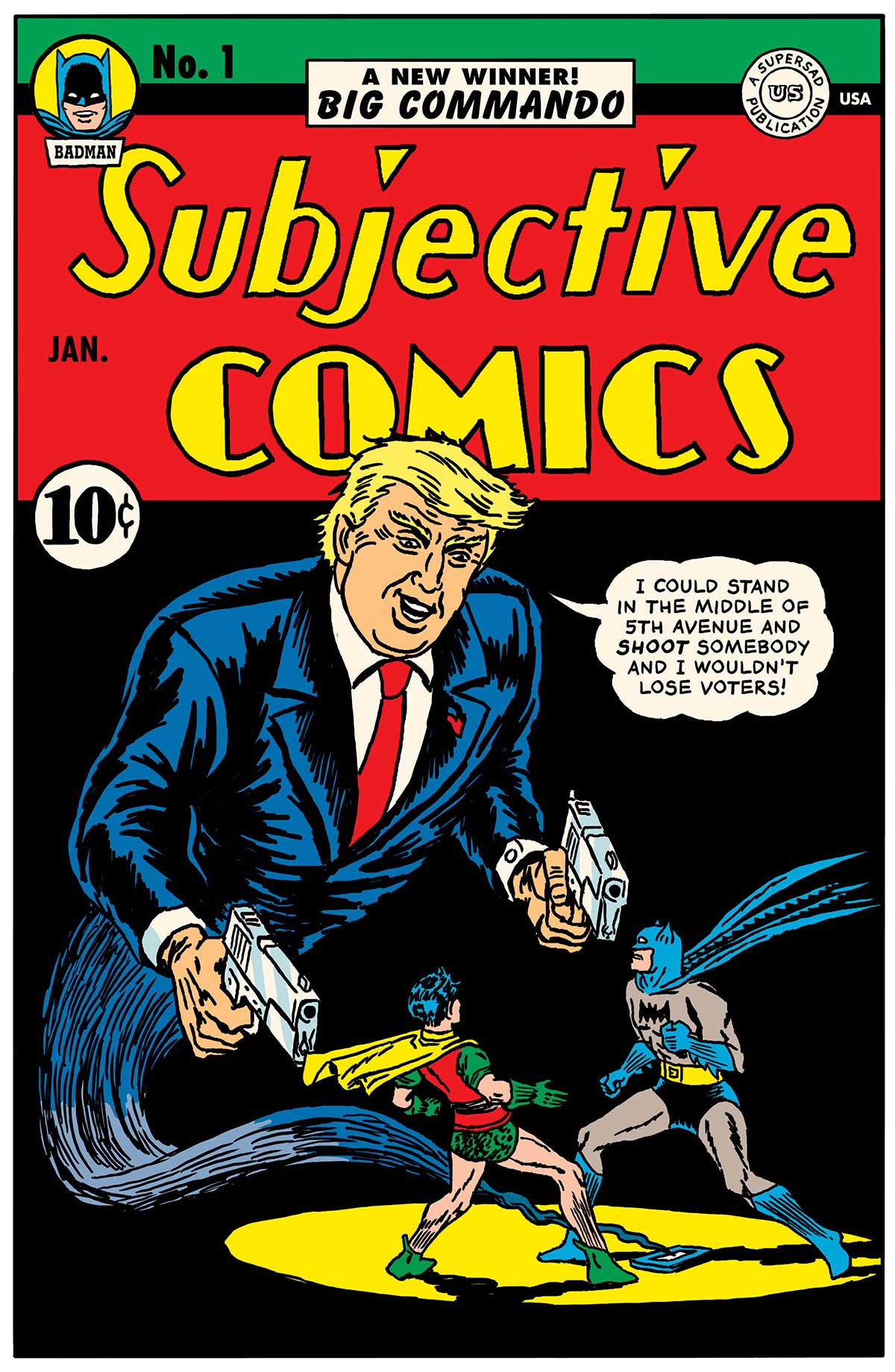 Billionaire turned politician, Donald Trump was a popular target for mockery and satire, even before his surprise election as president of the USA. For cartoonists, he’s both a dream and nightmare: his late-night tweets, unmediated by speech-writers and spin doctors, provide a daily stream of new material. Yet, to some, they are so absurd in themselves as to be beyond parody – it’s a smart move then by Sikoryak to keep Trump’s words as they are, and apply some gentle satire by re-contextualising them through the choice of visuals.

Re-appropriating other comics is Sikoryak’s signature move. Masterpiece Comics adapted classic literature in the style of classic comics. Terms and Conditions had Steve Jobs reciting the iTunes user agreement through a series of homage comics pages. Closest to the current volume is The Seduction of Mike, which told industry insider Mike’s fictional life story, in sixty years of (fake) comic covers. Each book, then, has it’s own twist, and the focus on Trump may just reach his biggest audience yet.

Trump fans may love the cover image of ‘the Donald’ smashing Hulk-style through a wall, but it also captures his basic lack of diplomacy. It’s a good introduction both to the concept, and to Sikoryak’s approach: all the images are ‘found images’ – comics covers repurposed with the addition of Trump and his quoted words. Sikoryak casts his net widely to find the right image for each quote, sometimes humorous (Trump talking abut his tax returns as Scrooge McDuck) or poignant (Trump attacking environmentalism with Aquaman prone at the edge of the ocean). Sikoryak’s a versatile artist, who clearly enjoys trying on other people’s styles, and the minor imperfections in his renditions give coherence to the whole, and keep reminding us of the parody.

Trump’s quotes are used in chronological order, and broken down into chapters representing stages in the real story: ‘The Campaigner’, ‘The Nominee’ and so on. For example, ‘The President’ begins with Trump as Marvel’s Galactus the Devourer, with all their heroes united against him. This turns these seemingly self-contained images into a compressed narrative of Trump’s political career so far. Matters like the Mexico wall come up in different stages, but that’s a fair reflection of the impulsive President’s approach.

Sikoryak has expressed his deep concerns about Trump, in The Washington Post and elsewhere, describing his book as both a critique of the man, and a cathartic relief from the horrible reality of his presidency. Inside the book Trump is cast as, ‘The Walking Donald’, in a note-perfect pastiche of Charlie Adlard, ‘then Donzilla’ and, alongside Russian President Putin, (replacing Dr. Doom and Sub-Mariner) in ‘Giant-Size Super-Leader Team-Up’. Mostly though he’s cast as the antagonist of Sikoryak’s parodic heroes: The Justice Department of America, Cat Pussy, and Nasty Woman. While some readers will quickly work out the Trump incidents these refer to, only the most cursory awareness of Trump is required to participate. Some pages like Black Voter (né Panther), simply highlight and leave us with a difficult question. In others, though, the author’s position comes to the fore, like in early page ‘Trumps-Formers’ – it’s sub-title ‘Rich Guys in Disguise’ raising the paradox of a billionaire convincing blue-collar Americans he has their interests at heart.

The Unquotable Trump is no splenetic rant that will split the audience, the effect is more… unsettling, in a way that should leave all but the most po-faced Trump supporters thinking more deeply about the man and his Presidency.