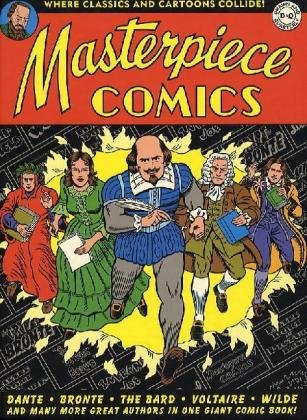 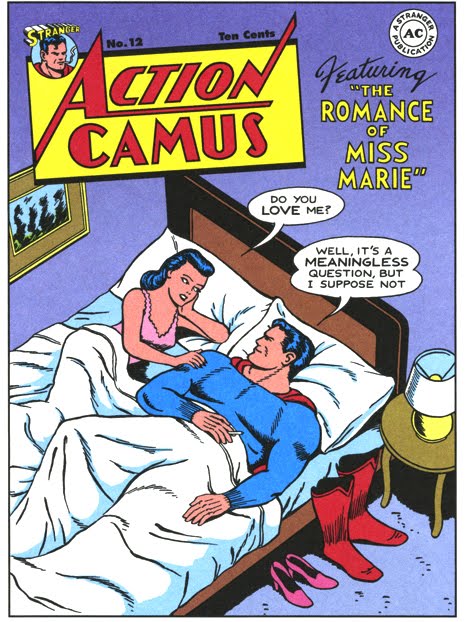 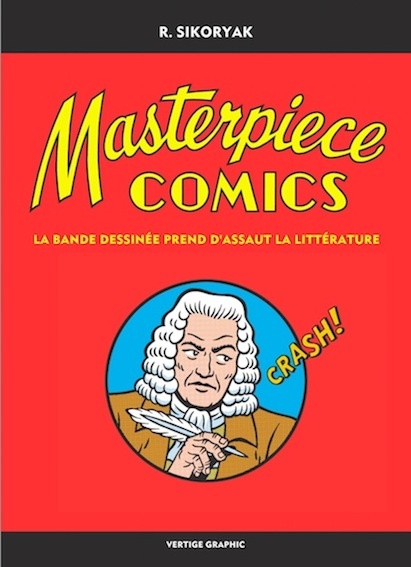 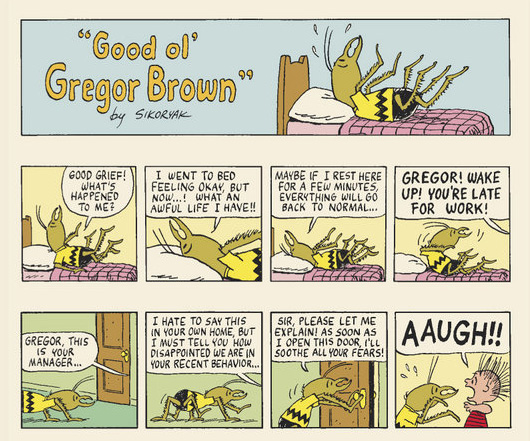 Sikoryak has appeared in various comics anthologies since the late 1980s – Art Spiegelman and Francois Mouly’s Raw, Drawn and Quarterly, Snake Eyes, and World War 3 Illustrated. He has also worked outside comics for the prestigious New Yorker magazine, and Jon Stewart’s satirical The Daily Show.

The first section ‘Classics on Parade’ features an number of shorts. Adam and Eve are depicted as Blondie and her husband Dagwood from the long-running domestic comedy syndicated across the U.S.A. and beyond since the 1930s. “We’re naked! Quick gather fig leaves and I’ll sew them into aprons“. ‘Inferno Joe’ is Dante in the format of the tiny Bazooka Joe comics that used to accompany bubblegum. Jon Faustus summons ‘Mephistofield’ to give him dark knowledge and power: in the pentagram appears a disdainful looking Garfield with horns and a trident “You rang?“.

In ‘The Crypt of Bronte’ The Housekeeper presents ‘The Heights’ and ‘The Depths’ . Yes, it’s Wuthering Heights in the style of 1950s EC Comics with lengthy captions, lurid dialogue: “Oh, I’m burning! I wish I were out of doors, and a young girl, and free! My blood rushes into a hell of tumult!“

Superheroes also feature. ‘Dostoyevsky Comics: Crime and Punishment’ stars Batman and Robin. L’Etranger (in English The Outsider, or The Stranger) Albert Camus’ classic tale of a man without feelings features the Man of Steel. It’s condensed into two pages in the form of eight 1950s style ‘Action Camus’ comic covers. Best quote: [Girl in bed with Superman]: “Do you love me.” “Well it’s a meaningless question, but I suppose not.” And there’s more. Oscar Wilde meets Windsor McCay in ‘Little Dori in Slumberland’. “Good grief! What’s happened to me?“ Wonders ‘Good ol’ Gregor Brown’: it’s Franz Kafka’s Metamorphosis, so he’s turned into a cockroach.

Sikoryak gets it spot on every time. He matches the comics and the books with real insight and wit, and it’s all rendered convincingly in the style of each original, not just the drawing, but lettering, colouring, logos and all the characters down to mimicking the original artist’s signature. For example in ‘Action Camus’ he nails the different lettering styles used on the covers, and the typically terse dialogue offering teasers for what’s inside. He even has a little circle above the main logo with a picture of our hero and the familiar logo we expect to list Superman, but actually reads Stranger.

There are also brilliantly faked comic covers, parodies of the recurring adverts in old comics (Moby Dick Whaling Ship “Big enough for 2 kids”), and Masterpiece Queries with fake reader letters and responses from the editor.

It’s fun spotting the references, but even those knowing little about classic literature or classic comics, should enjoy it and find it reveals much about the human race and our time on Earth.

Masterpiece Comics is a brilliant idea convincingly and wittily realised and there’s nothing else like it. If the idea appeals you won’t be disappointed.