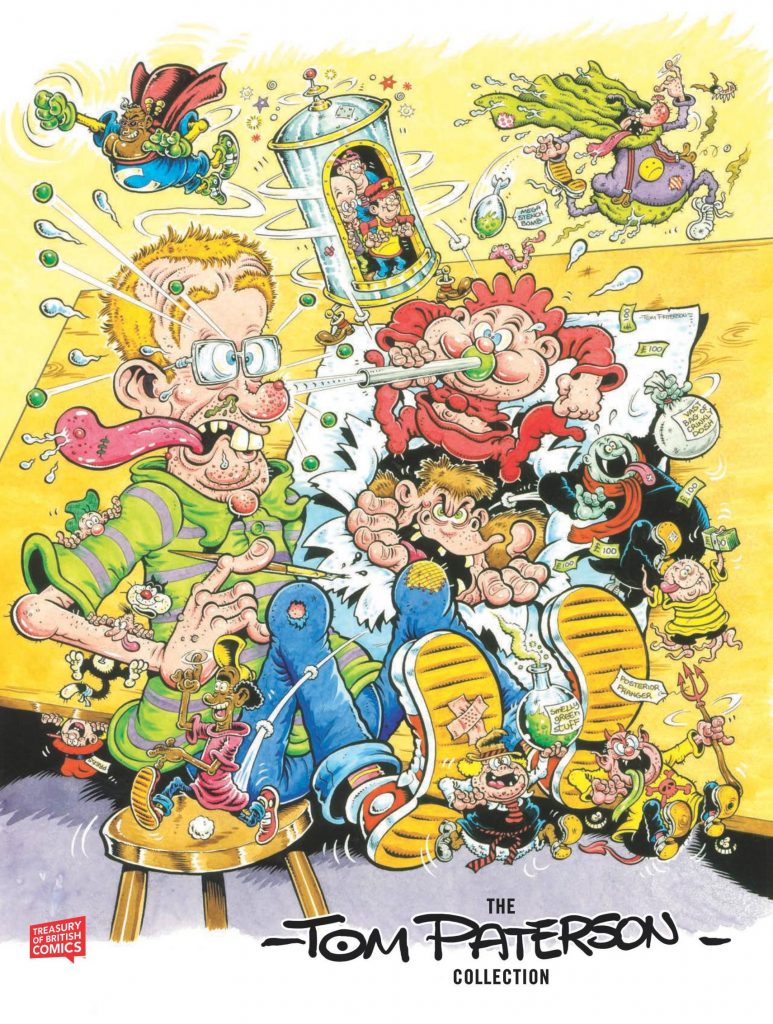 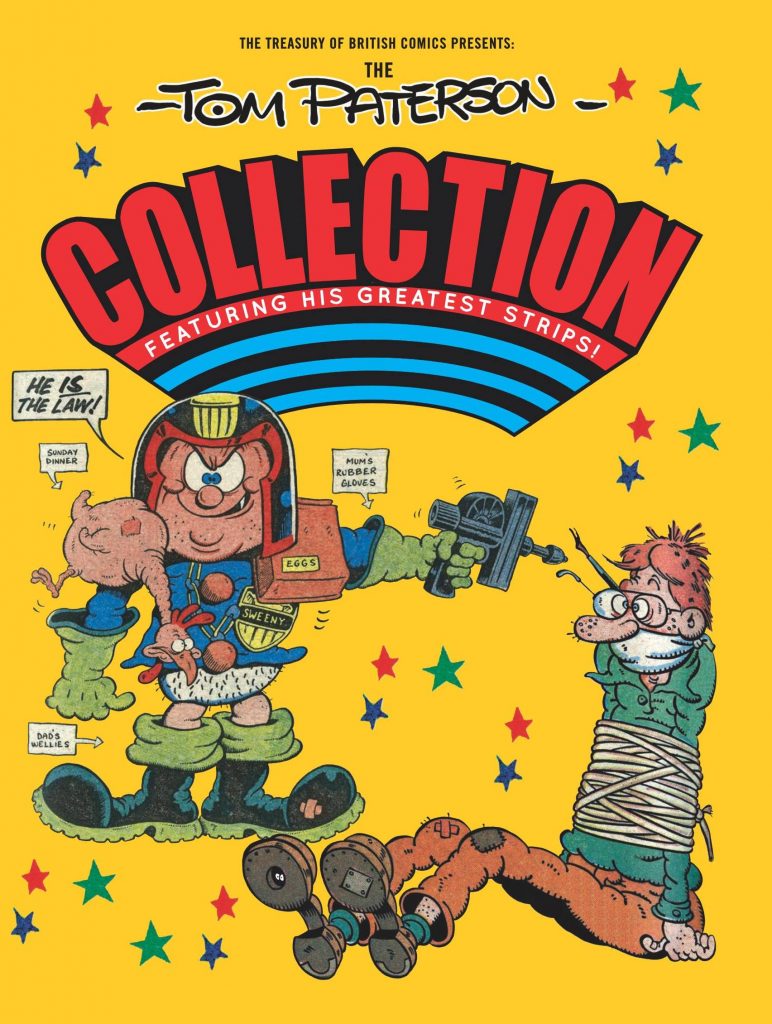 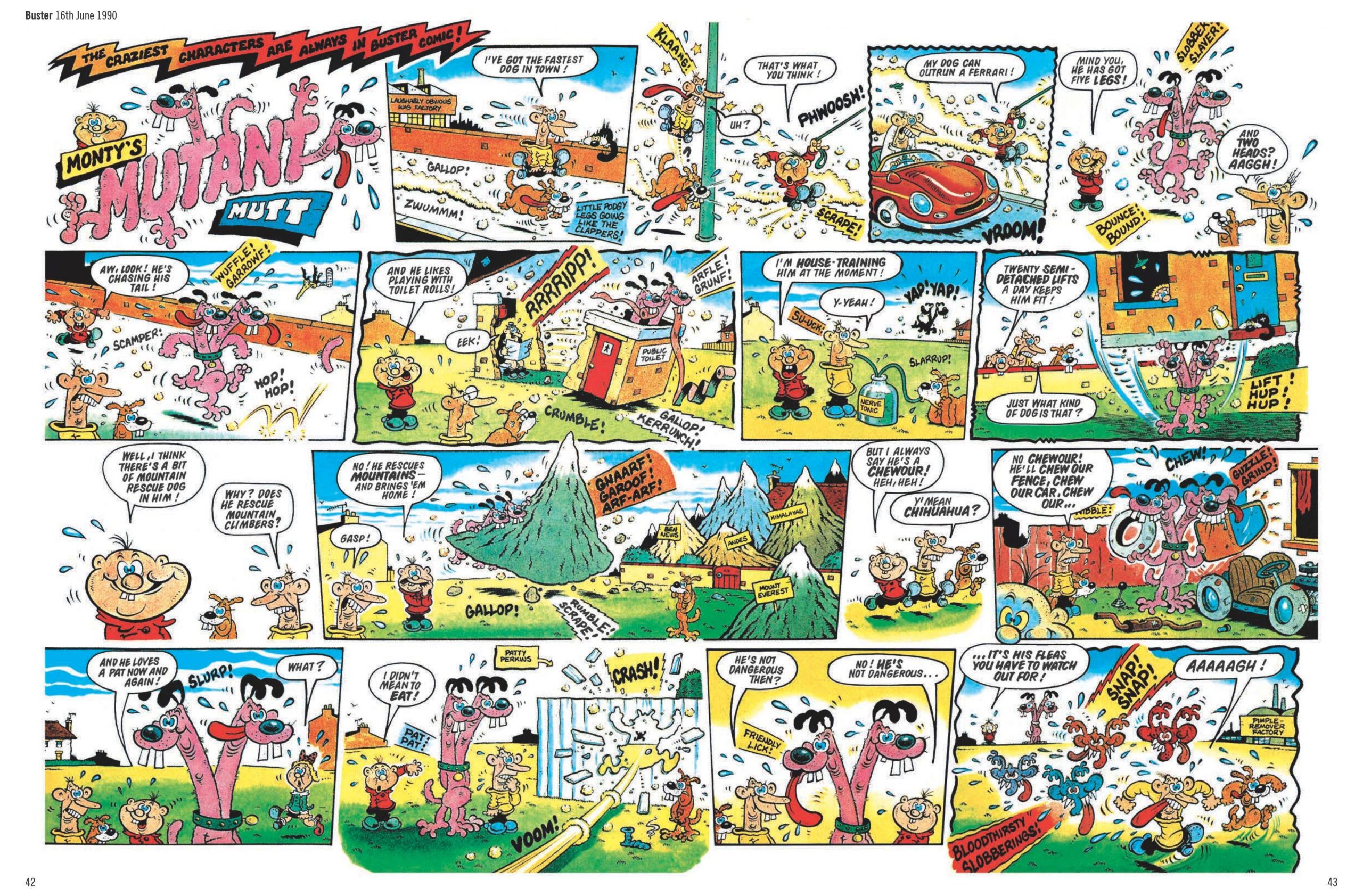 Whether readers know it or not, if they’ve read British children’s comics at any time since the mid-1970s they’ve seen Tom Paterson’s work. He’s hugely influenced by the anarchic style of Leo Baxendale, and so talented that not long after leaving school he was able to take over strips drawn by Baxendale. Paterson’s career splits into three distinct phases, and this collection concentrates on work produced between 1973 and 1990 for the London publisher best known as Fleetway.

It’s not a chronological collection, and that works for the best as it showcases Paterson’s virtuosity as leaps, but interestingly, there’s no point at which it’s possible to look at the pages, even when dated, and point to the inconsistencies and mistakes of a young artist. Paterson was a fully formed professional from day one. What he learned from Baxendale, and what influences every page here, is to exaggerate, to keep the pages busy, and keep the story moving. In his introduction Jamie Smart refers to Paterson’s strips having a wibble about them, and that’s about right. Yet what’s most remarkable is an ability to change style. The surreal rapping outings of Watford Gapp could almost be a 1970s underground strip, while Crowjak has something of Ronald Searle about it and Mongo Drongo could almost be Hunt Emerson’s work.

Instead of printing the strips in the order they were produced, they’re sorted according to the title they appeared in, with Paterson likely to have drawn several strips for each comic So the collection opens with work on the title strip from Buster, runs through a few outings for Captain Crucial and Lucy Lastic and then heads into a selection of one-offs, this content all from the mid-1980s to 1990, before heading back to the 1970s for a sampling of Crowjak and School Belle. After that it’s on to strips produced for Nipper.

Some strips were written by Paterson himself, ‘The Wet Blanket’ being one, and where known writers are credited, but unfortunately that’s on very few occasions. British children’s comics tended to be havens of anonymity until the 1990s, and records weren’t kept. Graham Exton wrote Sweeny Toddler during Paterson’s time and theirs is a combination every bit as manically funny as Baxendale’s original version, probably why there are more Sweeny strips than any other work.

The book closes with a number of strips worked up by Paterson, but never published, the type of material it’s always nice to see.

Paterson’s genius comes with a caveat. He produced these pages at the rate of a couple of week, and they’d be sifted in among the work of others, largely nowhere near as inspired or talented. In that setting the pages produce a concentrated dose of absolute mirth. Almost two hundred pages, though, are an overdose possibly requiring ambulance intervention, and even tend to diminish how good Paterson is by their sheer volume inducing a lack of proper appreciation. Like prescribed substances, a few at a time is the ideal dose. 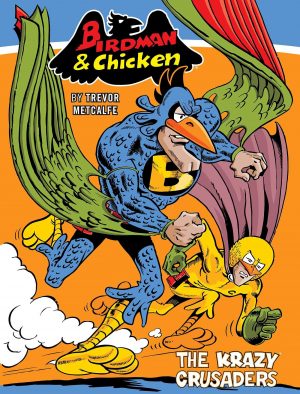