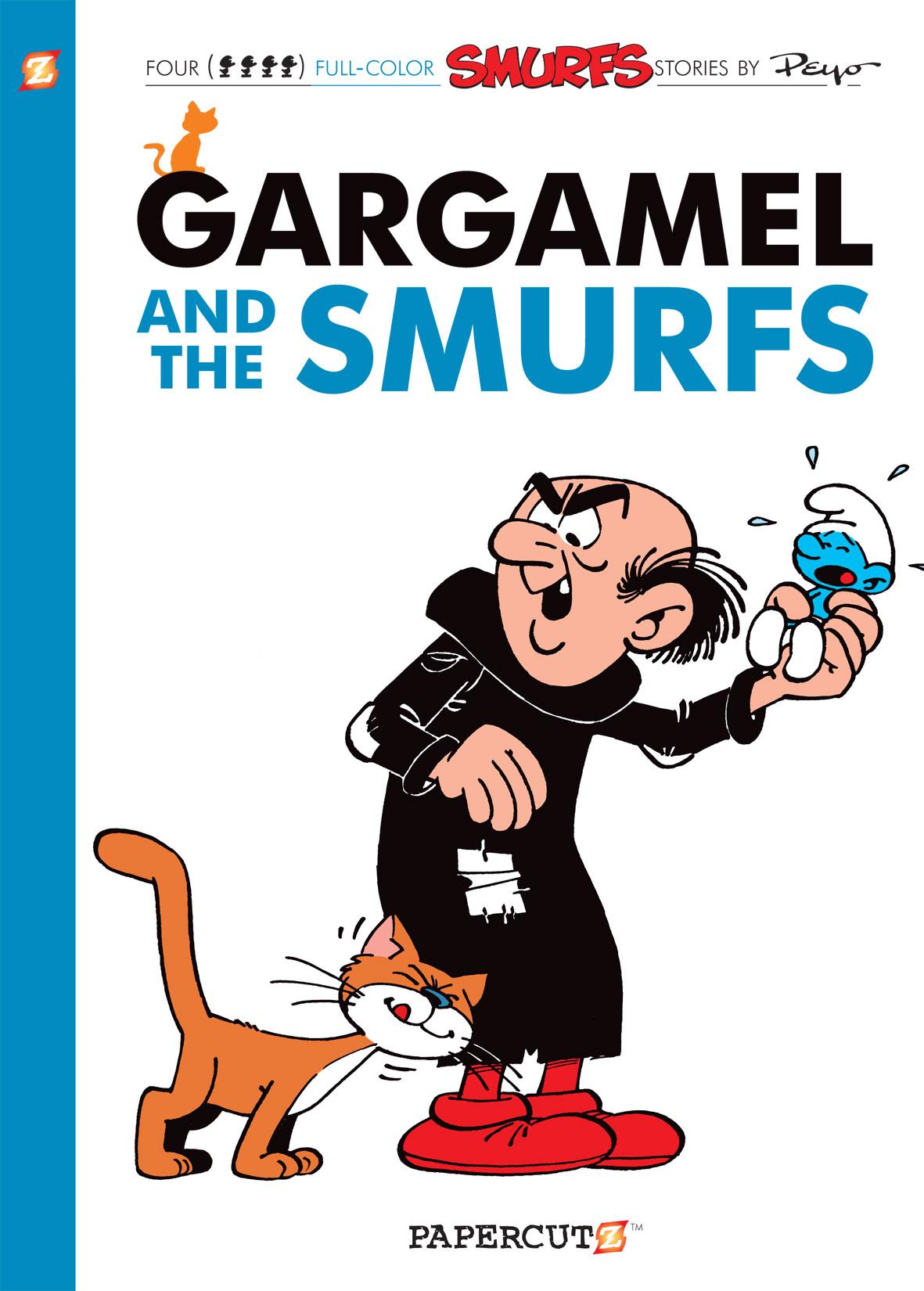 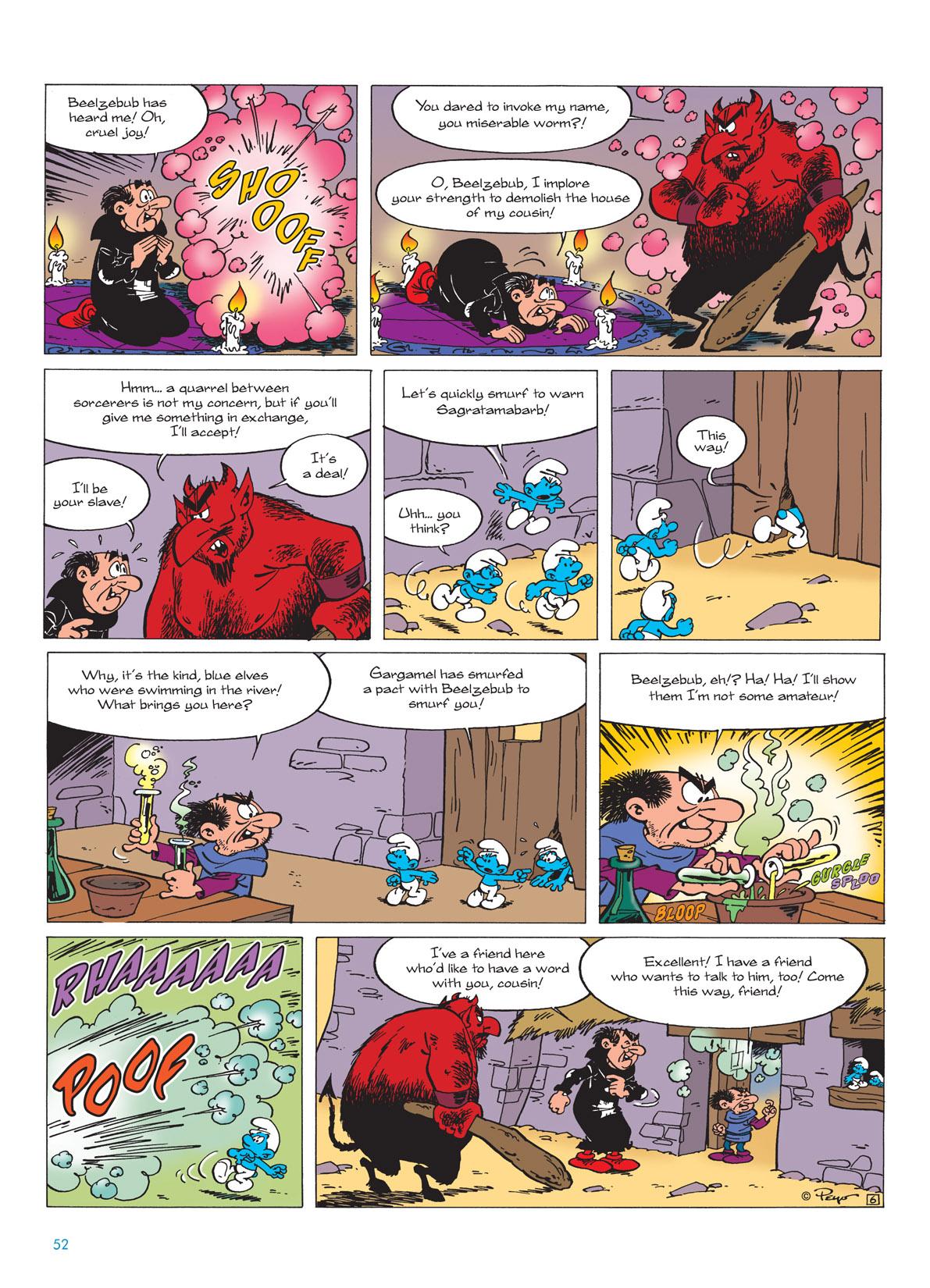 Because they’re isolated and timeless, it’s not always apparent that Peyo’s Smurf adventures take place in the equivalent of humanity’s medieval era. When the reminders do arrive it’s usually via the presence of the sorcerer Gargamel and his distinctive patched monk robes. Yet his form of drat! and double drat! villainy doesn’t always result in the most effective Smurf stories, as they tend to rely on slapstick and artificially inflating his incompetence to ensure a window of opportunity for escape.

In both ‘The Smurfnapper’ and ‘A Smurf Not Like Any Others’ Gargamel succeeds in capturing a Smurf, and it’s up to the remainder of them to organise a jailbreak. It’s the second story that’s more successful as it’s less reliant on mining the same theme for gags, and it incorporates the Smurf of the title, who’s overcome by an ennui and a desire to explore the outside world, no matter what dangers there may be. The other Smurfs try their best to persuade him otherwise in a funny selection of set pieces, but they don’t succeed, so before he leaves Papa Smurf provides him with a magic whistle that will instantly transport him home if he’s in trouble. Having introduced the maguffin, Peyo ensures that it’s well used. ‘The Smurfnapper’ is actually Gargamel’s début, and appeared in the opening volume of the original French albums, so perhaps there’s an excuse for his being a little rough around the edges. Yvan Delporte contributes to the plot, which is a series of gags about Papa Smurf and the troops trying to free the imprisoned Smurf.

‘The Smurfs and the Little Ghost’ has the Smurfs riding on a puppy, and takes much of its six pages to meander to the point of the story, and the little ghost himself. He’s proved to be popular in the cartoons and figurines are available, but however charmingly drawn, it’s lacking substance. Gargamel eventually puts in an appearance on the final page.

Sagratamabarb originated in one of Peyo’s projects not involving Smurfs, but is here revealed as Gargamel’s cousin, better natured, yet more devious and resourceful when it comes to sorcery. The Smurfs themselves are relegated to bystanders as the competition between the rival cousins escalates, and it’s quite the shock when Beelzebub turns up among the Smurfs, but as the sample page proves, it’s true. ‘Sagratamabarb’ is quite the uncharacteristic Smurf story, but provides more laughs than any of the other strips here, and it could have been continued longer.

While most of the material in this collection doesn’t match the best of the Smurfs, the quality of any Smurfs collection is raised by Peyo’s glorious cartooning. You’d have to be a smurf of exceptional smurfitude not to be charmed by its character and spirit. Smurfs books can be read in any order, but Papercutz follow this with The Return of the Smurfette. 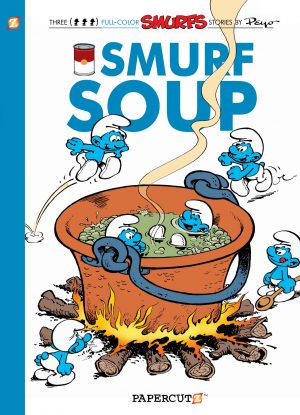