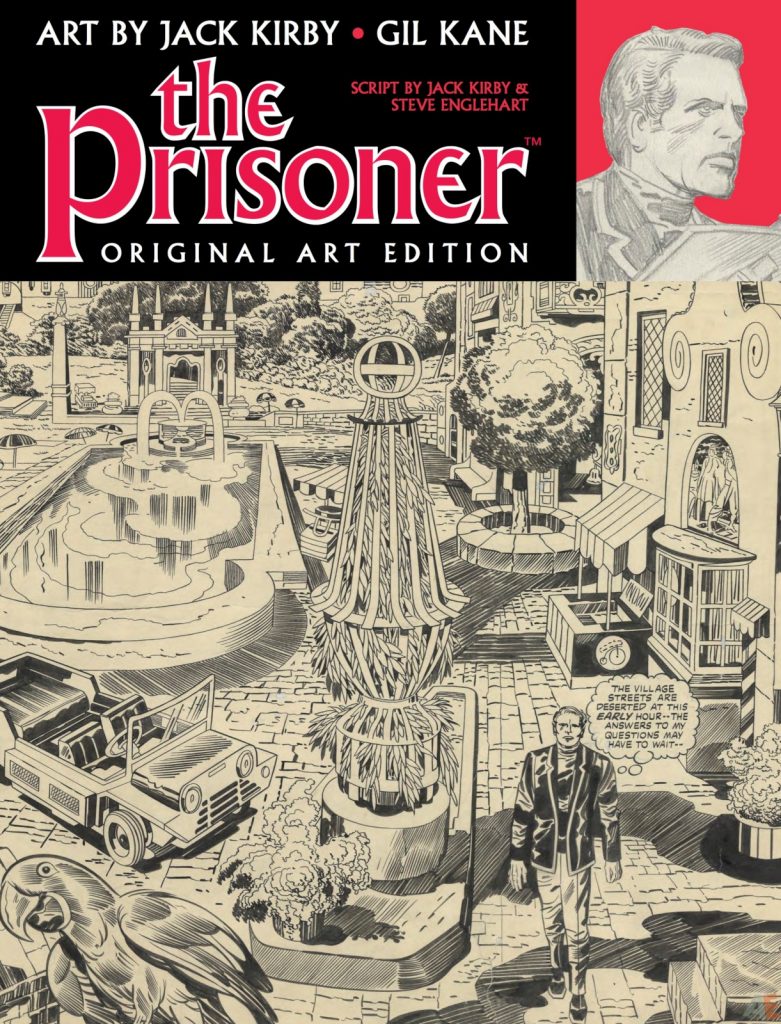 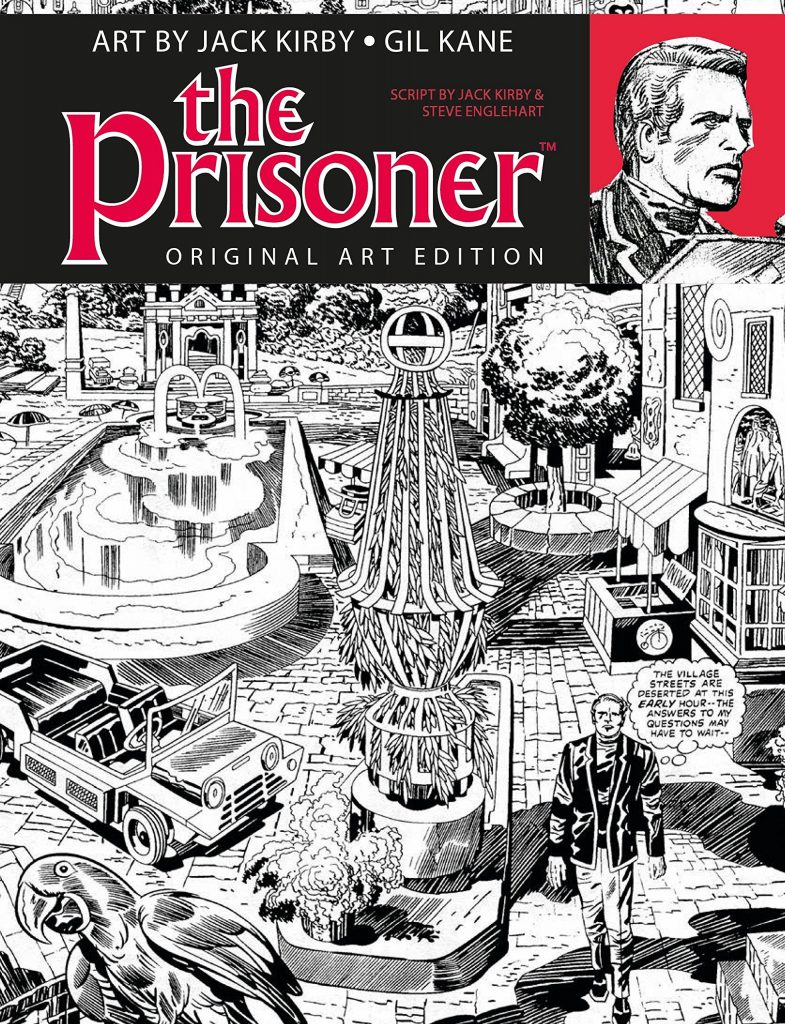 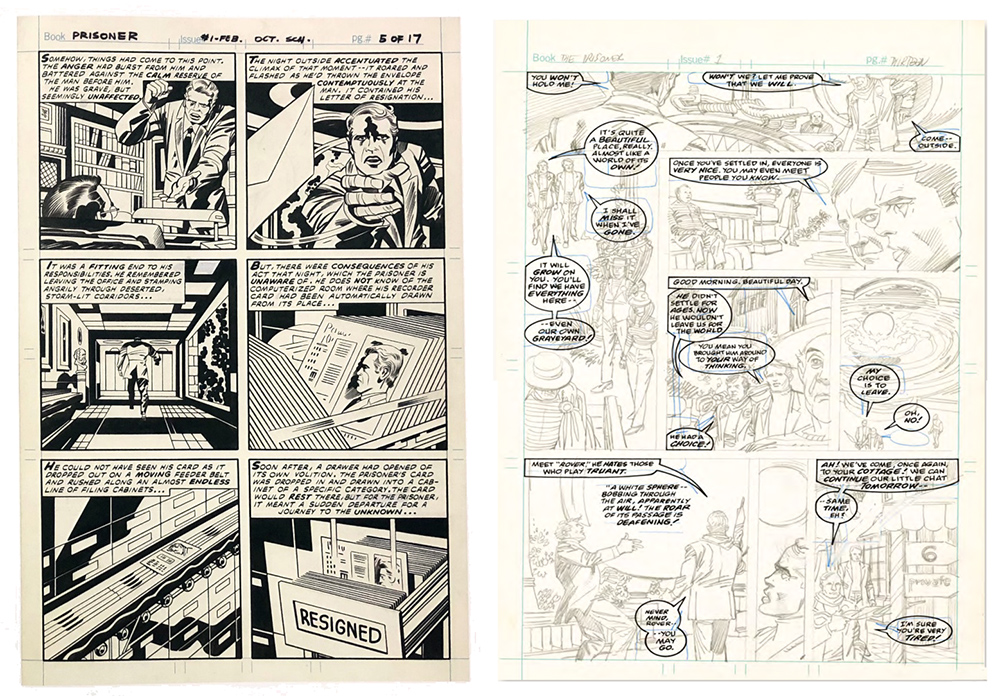 In 1976, Marvel Comics announced an upcoming series based on the hit TV show The Prisoner, starring Patrick McGoohan. A mixture of science fiction, cold-war espionage thriller and psychological study, the 17-part serial was strange and visually distinctive enough to slot seamlessly into Marvel’s lineup. However, no comics were ever published. Much later, photocopies of pencilled pages by Jack Kirby began circulating in fanzines. This proof that the first episode of the series had been adapted raised more questions than answers, but nobody knew anything.

The Prisoner – Original Art Edition is an Artist’s Edition-style book presenting the original comics art pages created for this project. Each page of pencilled and/or inked drawings has been photographically scanned in colour at very high resolution and reproduced actual size, on heavyweight paper. This produces the sensation of looking at original drawings exactly as created by the artist with all the pencil marks, marginal notes and other artefacts visible. 17 pages of art by Jack Kirby and another 17 pages by Gil Kane are collected here, along with various bits of supplementary material.

Jack Kirby’s 17 pages, the complete first issue of The Prisoner comic, are both written and drawn by him as he would do later in adaptating the film 2001: A Space Odyssey. It was to be inked and lettered by Mike Royer but only the first five pages are finished, with the remaining pages partially lettered pencils. Kirby’s approach to storytelling is a perfect match for this material and it looks great, briskly pulling the reader into the story and setting up the premise that is going to drive the series. The double page spread introducing The Village where Number Six is to be confined is a particularly effective composition, and it is also reproduced again later in this book coloured by Mike Allred.

Gil Kane’s 17 pages are pencils with no inks and no lettering. The layouts are more fluid than Kirby’s, with many more changes of angle and setting, and the slightly smaller panels pack in more of the events of the first episode than in Kirby’s version. To make up for the lack of text, Kane’s pencils are reproduced again, in a second section which presents them lettered by Rick Parker with the corresponding pages of Steve Englehart’s script alongside them. There is also a second version of Gil Kane’s opening splash page inked by Steve Leialoha.

There are another 26 pages of text features, including biographies of the artists, articles on the TV show, an introduction by Mike Royer, and Steve Englehart writing about his work on the project. But despite all these extras, why The Prisoner comic was never completed, what happened between Jack Kirby and Marvel’s editors that caused a second version to be commissioned, and why that was never completed either: none of these are explained. Given that this is the crucial information every Kirby fan picking up this book wants to know, The Prisoner – Original Art Edition is frustrating. The additional material struggles to pad out the small amount of art displayed here without adding much to it. It also blurs the question of who this book is aimed at. An adaptation of the first episode probably won’t be an essential purchase for fans of The Prisoner show who will be very familiar with the material already. Kirby fans may feel underwhelmed despite the excellent packaging of this Artists Edition which looks great, but is expensive for what it contains.