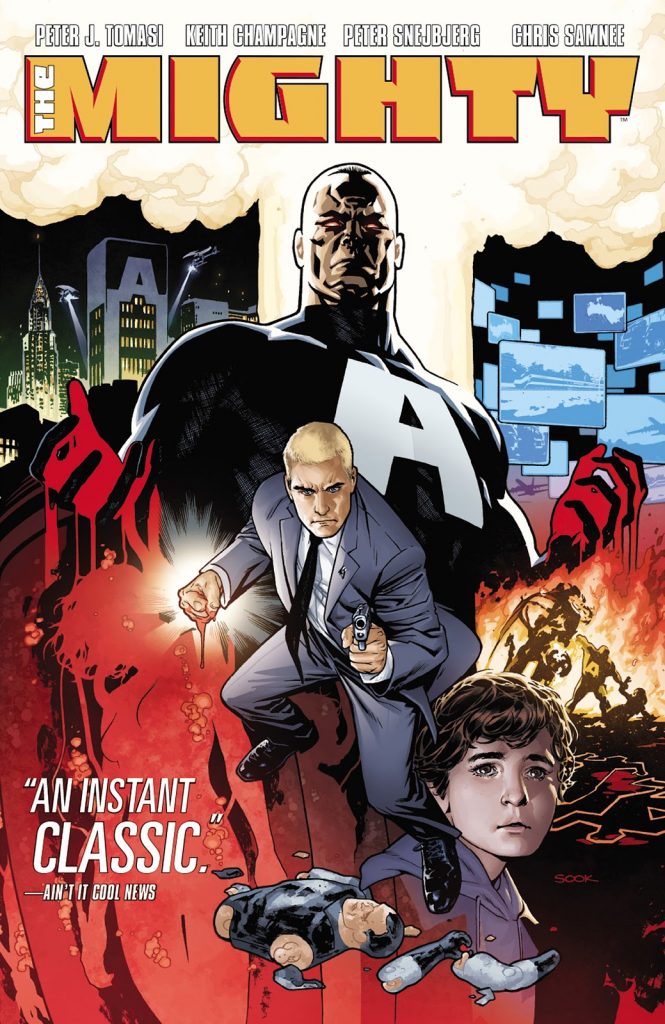 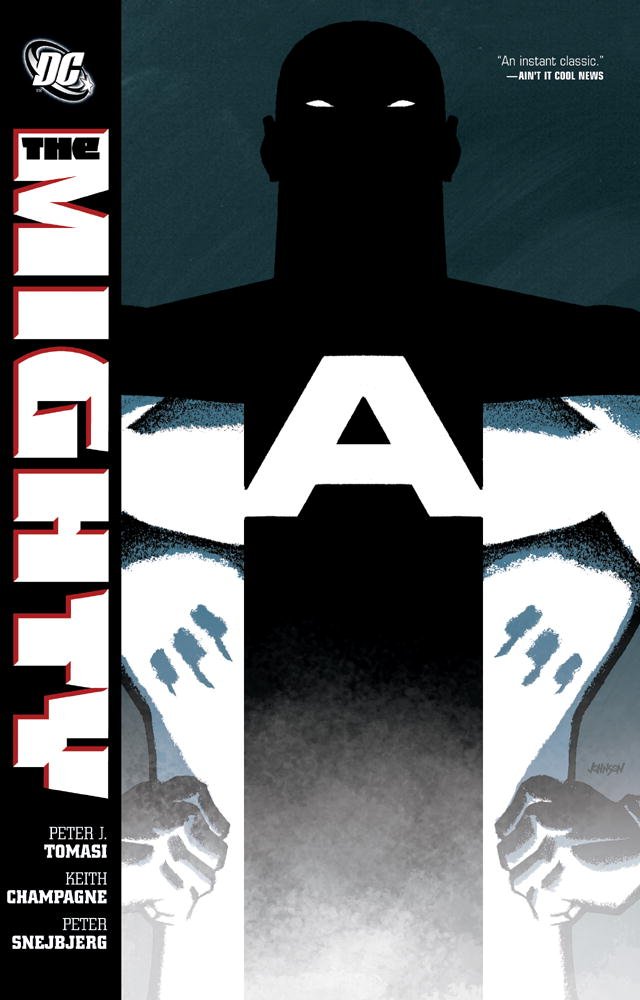 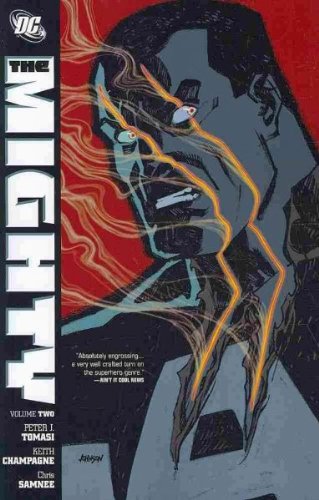 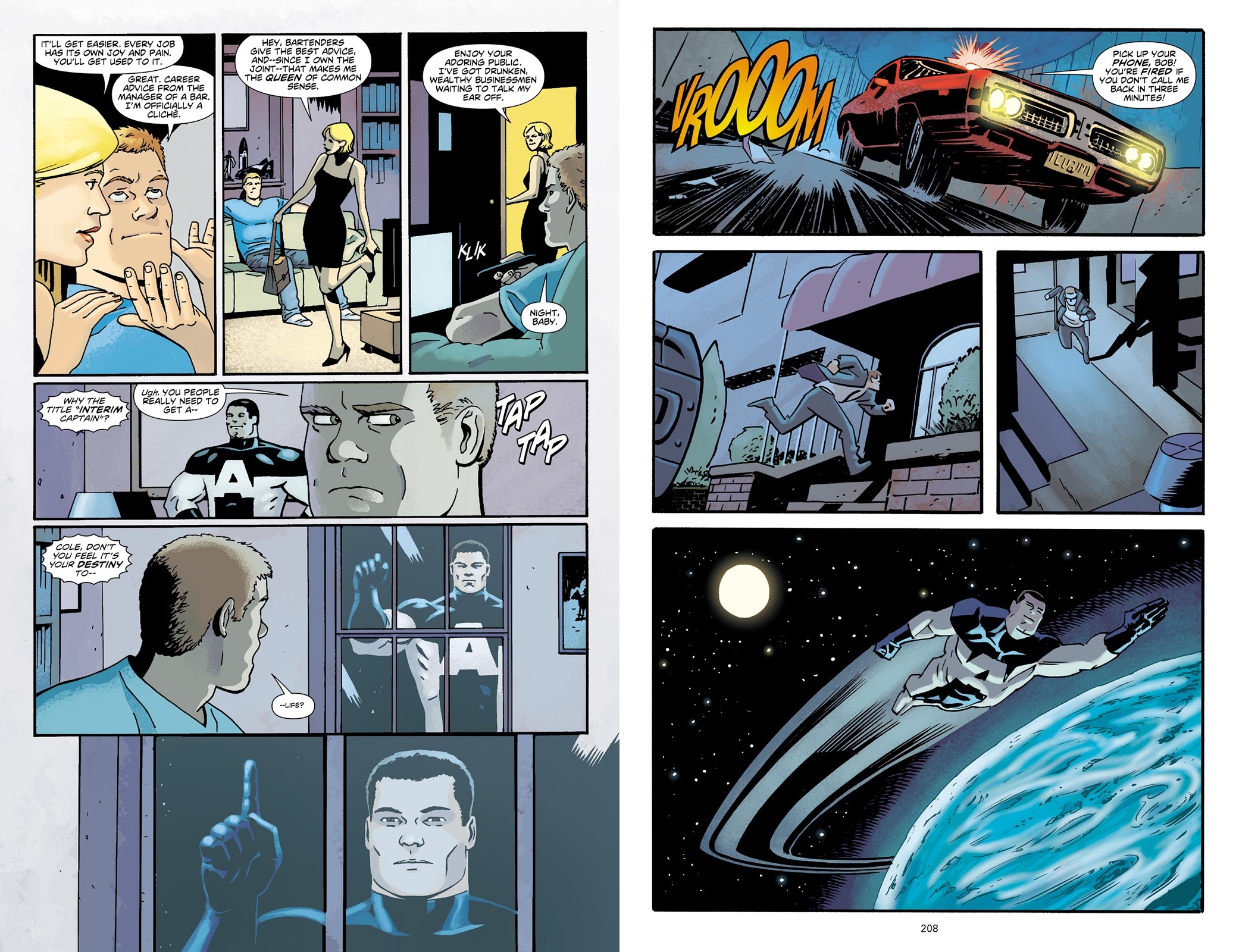 The central element of The Mighty is concealed for some while as writers Peter J. Tomasi and Keith Champagne build a world around a superhero in Superman’s class. The plot is prompted by one factor that needs discussed, so the spoilers start in the fourth paragraph. The short review is that The Mighty is well written, if a little extended, and excellently drawn by Peter Snejbjerg, then Chris Samnee. It trades heavily on the use of a superhero, but has more in common with investigative drama.

Tomasi and Champagne build the mood well over an opening chapter looking at the back-up team supporting the heroic efforts of Alpha One. While he deals with the physical aspects of coping with a runaway train, the Captain of Section Omega, Alpha One’s personal nationwide police response force, is sending people along to interview survivors and help with the after effects. Alpha One funds all operations via merchandise sales and personal appearances, enabling technology such as the A-shaped activator embedded in his Captain’s hand. alerting him to trouble. Although seen, Alpha One is kept in the background at first, when the spotlight is on Chief Shaw, and his younger deputy Gabriel Cole, who we learn was rescued as a child by Alpha One at an incident leaving him orphaned.

It could be said that Snejbjerg and Samnee are both underrated artists, the pair having the full range of storytelling skills, and when he takes over with the fifth chapter Samnee is talented enough to mimic Snejbjerg, only gradually moving more toward his own style. Due to the nature of the story there’s a dark visual tone from the beginning, with John Calisz only very rarely using bright shades, and this is often red to highlight an atrocity.

While the story couldn’t be told without Alpha One, Cole is the focus, with most events seen through his eyes, and the evidence that Alpha One is no longer what he once was gradually slots into place. Several 21st century graphic novels concern revered superheroes turning bad, victimising the ordinary people they once sought to protect. The idea is generally a less ethically considered version of Watchmen’s conclusion, but The Mighty was otherwise ahead of the game.

Some familiar scenarios set the scene, such as the orphaned child wanting to protect others, and the superhero’s buddy, but these are subverted or later recontextualised in clever writing offering small signs that all isn’t well (some just visual) before the revelation a third of the way through. It takes another two chapters before Cole confirms his opinions, after which the writers are free to escalate the barbarity of Alpha One, which shifts the atmosphere from a drama with gosh-wow factor to the suspense of an action thriller. How can Cole keep secrets from someone able to see him from the moon and hear him from the other side of Earth? Everything leads to a compelling and emotionally satisfying finale to a generally interesting page turner.

Tomasi and Champagne pace their story as a twelve chapter drama, so it’s better read as a single book than as the previous two edition version published by DC.