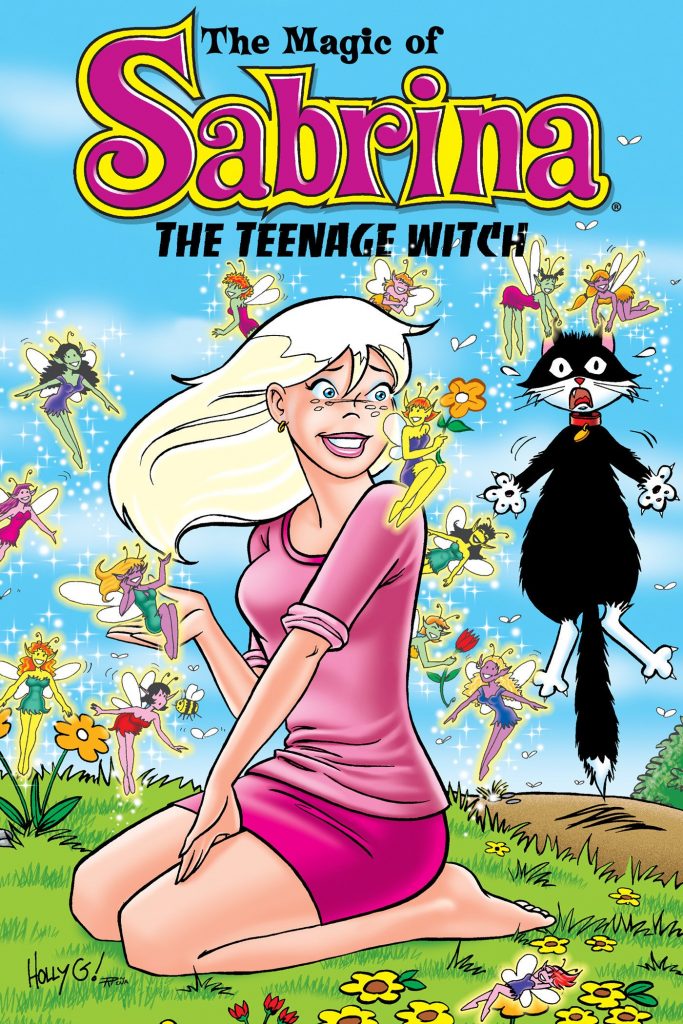 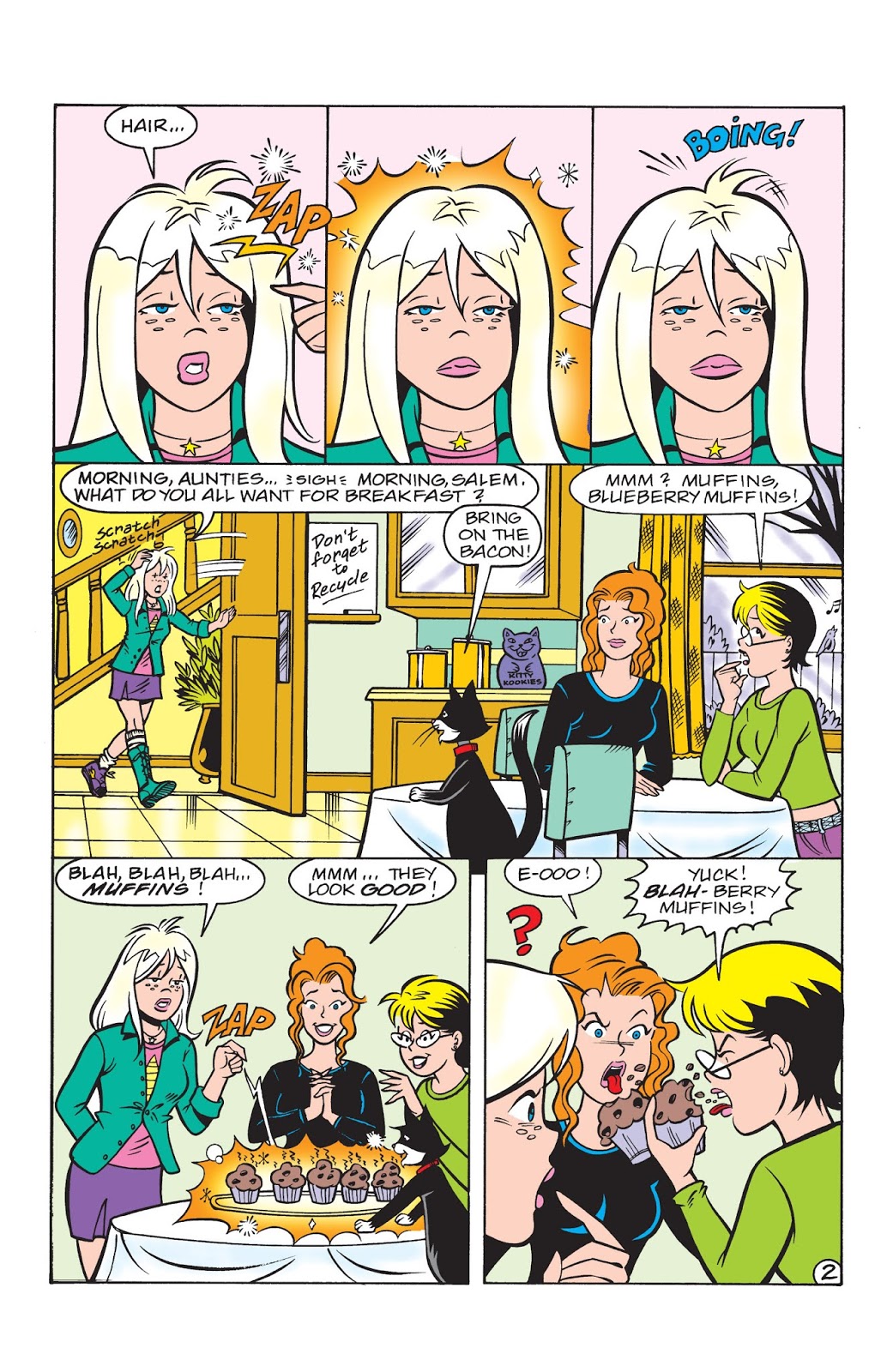 Sabrina the Teen-Age Witch debuted in 1962, created by George Gladir and Dan DeCarlo as a throwaway character. Almost instantly she proved popular enough to become a regular in the Archie cast, and by 1969 the comely enchantress starred in her own animated TV series. Nevertheless, it wasn’t until 1971 that she finally won her own title.

Sabrina is just a typical Greendale High School girl, living with Aunts, Hilda and Zelda Spellman, and tentatively dating childhood pal Harvey Kinkle. Sabrina is an atypical witch: half-mortal (on her mother’s side), passing herself off as normal. Complicating her life is snide and snarky Amy Reinhardt – a spiteful rival for Harvey’s affections. Sabrina’s pet cat, Salem is no ordinary cat. Centuries ago he was the most powerful warlock on Earth, but after trying to conquer the world he was imprisoned in a cat’s body where he could perform no magic. He can still talk, but his rehabilitation is, at best, grudging.

This particular grimoire of giggles is cherry-picked from Sabrina’s third series, running from 2000 to 2004, based on then new TV show Sabrina the Animated Series. It’s restricted to contributions illustrated with dazzling verve by artist Holly G! (Holly Golightly) and celebrates the wacky wonder of teen hormones and black magic acting in tandem.

‘Internet Threat’, scripted by Michael Gallagher, has Sabrina lazily abusing her gifts and grounded by her aunts. When Sabrina makes magic online she’s abducted by the aggressively invasive Empire of Lost E-Mail.

The most plots are by Bill Golliher, whose contributions begin with ‘All’s Fair-y’, in which a plague of ungrateful pixies infest the house. When Salem’s 100-year parole meeting comes due, Sabrina is missing from the hearing and mean head witch Enchantra messes with the prodigal’s memory in ‘Sabrina Who?’ In three-part thriller ‘Danger from the Deep’ Golliher introduces a mermaid seductress who sets her sights on Harvey and uses deep-sea magic to further her aims. A school sleepover in a condemned haunted house sees a pair of aggravating spooks follow Sabrina home in ‘A Haunting We Will Go’, whilst an exclusive invitation from a prestigious “Other Realm” institution has Sabrina offered a place at ‘Charm School’. The singular honour and old friends already there are hard to resist, but Enchantra’s bratty daughter Lilith is determined to have Sabrina expelled before she arrives. ‘It’s My Party’ sees a big bash for her Charm School chums looking likely to drive Harvey right into Amy’s eager clutches.

Holly G! writes as well as pencils, and the two-part ‘Spell Trouble’ has Sabrina despatched to an otherworldly after-school program to correct her “spelling” difficulties. Here she meets cute boy Shinji Yamagi: a gorgeous, popular young warlock working to overcome his embarrassing “Spellexia” who will complicate her life with Harvey. ‘Between a Rock and a Hard Place’ has Amy make another brazen play for Harvey, forcing Sabrina to compete on her rival’s terms in a talent competition. ‘Model Witch’ sees Sabrina elected Teen Witch of the Month in a breezy tale recapitulating her origins and family life, and elemental prankster Jack Frost targets Sabrina in ‘Frost Bite.

Abby Denson scripts ‘Bikini Babes’, with the school sorceress trying to boost a mortal friend’s confidence by charming her new swimsuit, which unleashes a social monster. Denson then embroils the teen thaumaturge in role-playing game chaos for ‘It’s In the Cards’, before a planetary alignment sends the powers of all witches hilariously haywire in a ‘Zap Flap’ crafted by George Gladir.