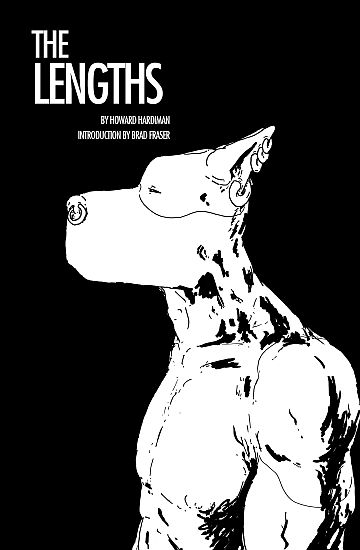 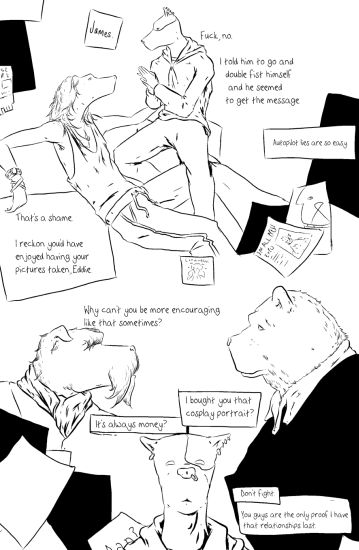 Based on interviews carried out by Howard Hardiman with men selling sex to men, The Lengths tells the story of young Eddie who, ostensibly for financial reasons, becomes a hustler. What follows is definitely not a gay version of Pretty Woman. Eddie takes on the name “Ford” (a Hitchiker’s Guide To The Galaxy reference), at first a way to protect his private life and keep his activities to himself, hiding them from his then boyfriend James. It soon becomes clear that Eddie’s work, though well-paid, tends to separate him from the non-hustling world, leading to feelings of disassociation, to losing himself in a role that wasn’t meant as a complete and balanced persona.

Other characters include Nelson, a bodybuilder who’s Eddie’s mentor in the world of hustling and whom Eddie tends to see as perfection made flesh, as well as Dan, Eddie’s friend (and maybe more), his anchor to the everyday world.

Hardiman worked on this story as a project for his MA in illustration. He certainly provides a lot of food for thought, presenting a complex look at characters who are as flawed as real people,yet as much as possible avoiding easy judgement of them. Hardiman has made some interesting choices: he uses anthropomorphised dogs to stand for the men involved, and his storytelling is heavily fragmented, his use of chiaroscuro and dialogue placement reminiscent more of manga than of Western comics.

Choosing to draw the characters as humanoid dogs has a contrasting effect with the first person voice used throughout the book. While the reality is enhanced by having Eddie narrate, making us voyeurs into his state of mind, the dog faces suggest a fable set in a fantasy world. In other words, we’re drawn in by Eddie’s thoughts and at the same time kept at a safer distance by the canine portrayals. Hardiman’s use of art references (Klimt, Rothko, etc.) also makes the reading more reflexive than it would have been otherwise, a device that both illuminates the scenes depicted, as in a medieval manuscript, and tones down the melodramatic potential.

The general atmosphere is rather bleak, but not in a graphic way, more due to Eddie’s tone of mind. He seems lost playing this new, unstable self, and the author conveys the idea of this floating world with a stark imagery—for example in the chilling, full-pages sequence where we see Eddie setting foot for the first time in a gay brothel, the boys lying languidly in poses directly inspired by Gustav Klimt’s work.

The Lengths is not always an easy book to read. The storytelling mostly avoids using panels, opening up the page in a manner more in keeping with manga. The emotional impact, on the other hand, is indubitable: Hardiman has a knack for using large swathes of blacks (and large swathes of whites) as well as for leading the reader’s eye in a way that puts many more seasoned artists to shame. The Lengths may not be the most reader-friendly book at first glance, but it’s definitely good, inventive comics that rewards paying attention to what’s on the page.

The visual qualities, alongside the nuanced characters, make for a strong, hard to forget book. Howard Hardiman can be proud of his MA project.