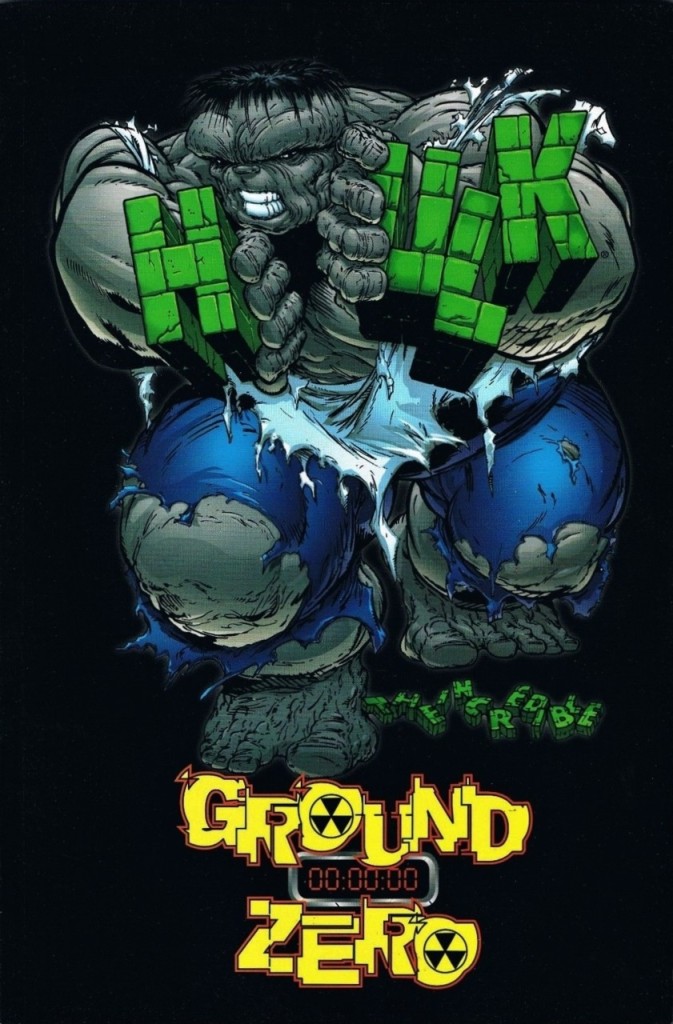 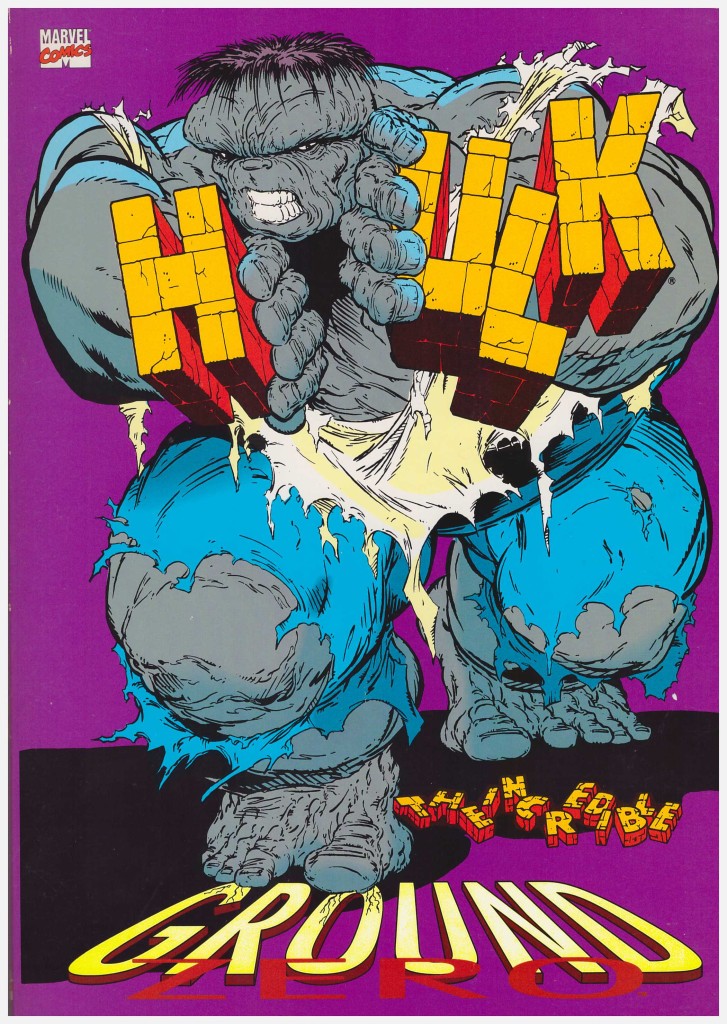 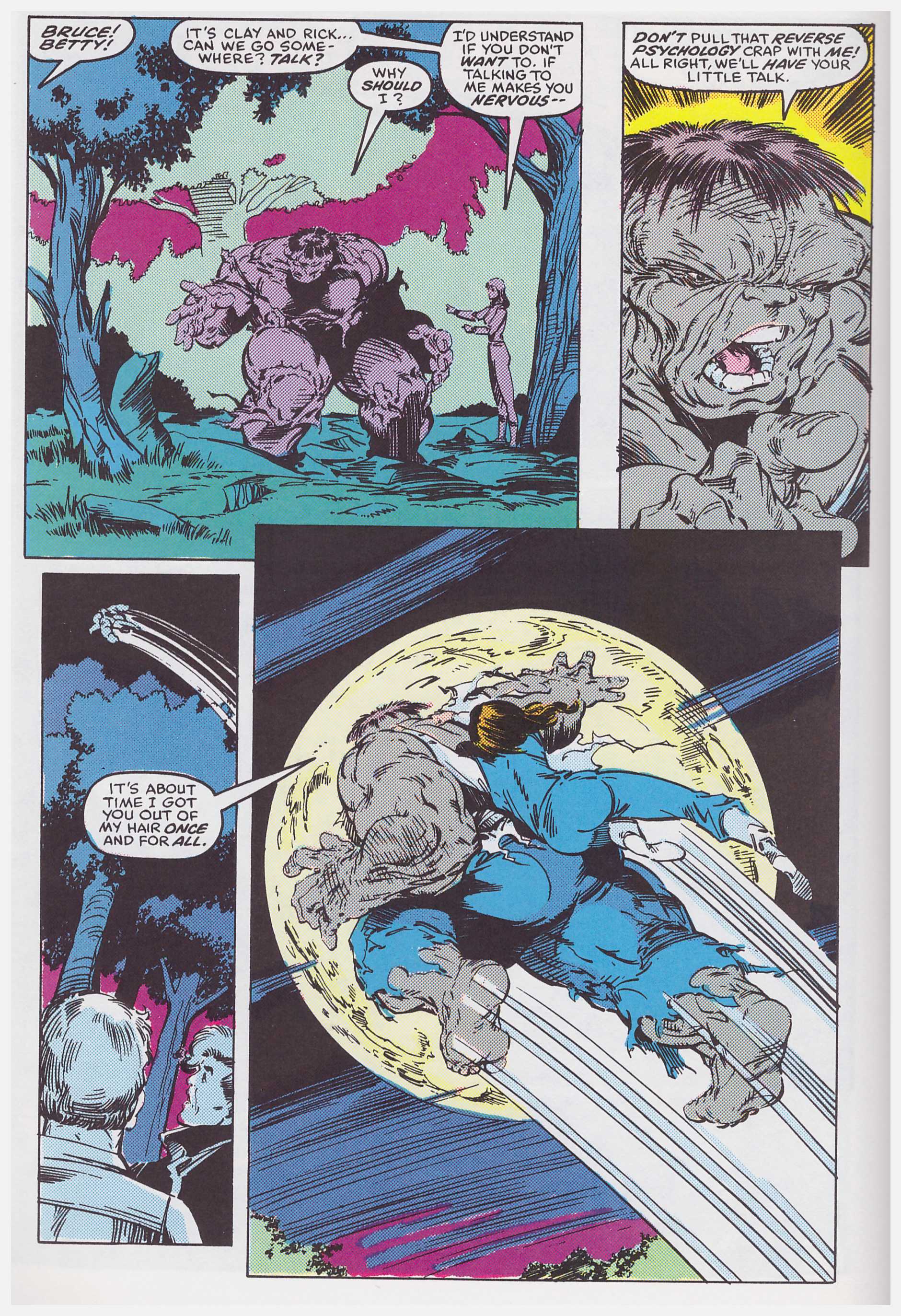 When taking over the Hulk, Peter David immediately shook up the status quo by restoring him to his very earliest incarnation of a grey angry brute, but one with the intelligence of a bar brawler rather than an infant like his latter-day green counterpart. At the time Ground Zero was published this earlier material was only available as comics, but is now collected as Hulk Visionaries: Peter David Vol one.

This would be Todd McFarlane’s final work on the Hulk, the feature that enabled him to progress from a competent artist with no distinct style into a creator with a major fan base. He veered toward cartooning, learned to exaggerate the Hulk still further into a raging behemoth, and spread hatching lines all over his pages. Given he was already competent these were completely redundant, but served to cement a style. It’s impressive here, and better than his later and more commercially successful work by virtue of concentration on telling a story rather than producing pin-ups. There’s also a good redesign for the Hulk’s old foe the Leader. McFarlane had moved on before the end of the book, providing layouts for Erik Larsen’s similar but less fussy style. Larsen, though, lacks McFarlane’s expertise and there are some decidedly odd figures and expressions on display.

The book opens with the Hulk, Rick Jones and AWOL S.H.I.E.L.D. agent Clay Quartermain touring the country searching for government-concealed gamma bombs, intending to destroy them. Meanwhile the Leader is also on the hunt. In terms of story David is still finding his way. There are clever moments in an encounter with Wolverine and a pathos to meeting Man-Bull, but neither is compulsive reading. When David finally moves the Leader’s machinations centre stage we hit the high octane moment. Over five chapters he weaves a compulsive and unpredictable story, finally making use of the Leader’s previously much touted super intelligence, giving a purpose to the former Hulkbusters, and delivering some great sequences with the Hulk himself. One is perhaps a little underplayed, unusual for both David and the Hulk, in which we move from “I beat up some robots who thought they were tougher than me. Period. I don’t care about Banner’s wife” to “Get her covered. Keep her warm. I’ll get food for all of us.” The increased vocabulary now available supplies a greater emotional depth to a scene that’s been seen in variations for years. That, though, is but the prelude to a confrontation of sorts between Betty Banner and the Hulk that’s brilliantly worked.

So is the Leader’s eventual plan, which is cruel, calculating and with a far greater purpose and ambition than your usual super-villain’s plot. It doesn’t play out predictably, and the final chapter in which the supporting cast detail how their lives are better for contact with the Hulk is a gem, or would be with more consistent art.

The continuing material is found in the second Hulk Visionaries: Peter David, but so is Ground Zero, and as the other chapters included there provide a postscript, it’s a better purchase, if more diluted in terms of quality.