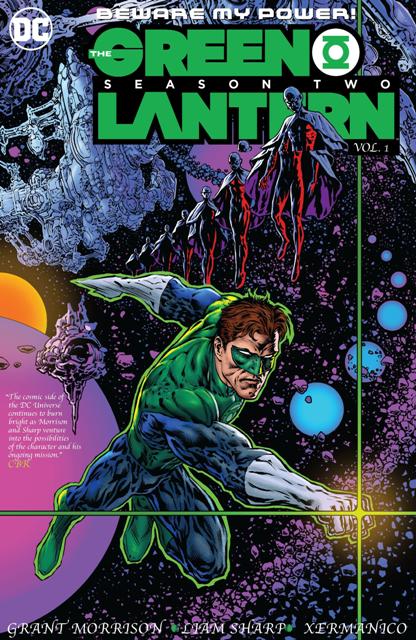 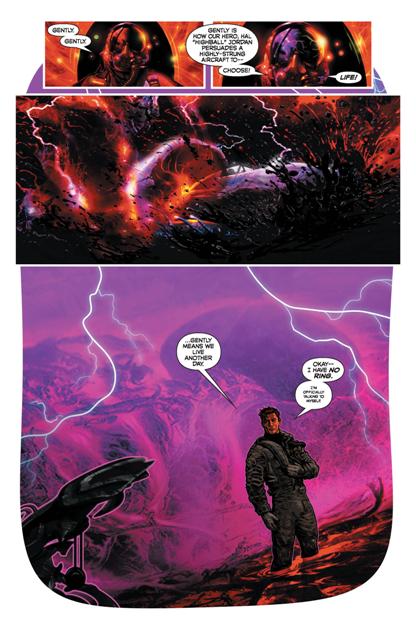 The Green Lantern is Grant Morrison’s homage to the era of comics when Hal Jordan made his first appearance. In Season One Morrison explored the concept of Jordan being a cop rather than a superhero and that Jordan acted heroically because his job required it. The focus was removing Hal from his superhero persona to position him as a grizzled cop working a tough and dangerous intergalactic beat. At the same time, Morrison introduced the possibility that the role of the Green Lantern Corps might also extend to inter-dimensional realities to maintain the balance between them.  Over Season Two the focus switches to Hal’s personality and character, how that reflects on his role as a Green Lantern and the price he personally pays to fulfill his duties.

Morrison’s career has always been characterised by experimentation, changing things up as the story requires it. Season One had an overarching plot while Season Two is more episodic in approach, harking back to early 1960s storytelling. Revisiting original concepts to expand or upend them is another of Morrison’s traits, suggesting that Jordan’s adventures might be some sort of afterlife experience or multiple Hal Jordans across different realities. Readers will also recognise ideas introduced on Morrison’s New 52 run.

New concepts include continuously regenerating Guardians of Oa, younger and enlightened versions of the familiar ones who introduce new policies much like an incoming Police Commissioner. Placing Hal as the experienced cop who weathers the storm allows a deeper exploration of potentially controversial topics while adding dimension to him. Does Hal’s rebellious nature provide a counterbalance to the often brutal pragmatism of the Guardians of Oa and the corps?  It is vintage Morrison tale-weaving, taking familiar concepts, themes, and worlds to invert them completely. Typically Morrison’s work is often hard to follow but when the story gets to where it’s going, there are some interesting thoughts on the man Hal Jordan apart from his persona as one Green Lantern among many.

Season One was defined by the detailed and splendid visual styles of Liam Sharp, who returns for this season along with Spanish artist Xermanico (Alejandro Germanico Benito Gonzalez) providing art for the story ‘Under the Sun at Midnight’. Artistically his vision is as epic in scope as Sharp’s if more polished by comparison. Xermanico’s cast tends to be grandly posed with the action appearing static but beyond that, his illustrations are grand and precisely rendered. He’s also very inventive with an impressive cast of weird wonderful aliens, cosmic warriors, and starships inhabiting increasingly spectacular landscapes.

Sharp likewise continues to impress with his ability to flip from style to style, retro for story ‘Young Guardians’ before swapping to a cleaner look for ‘Thunder on Wonder Mountain’. His starships and space stations are phenomenal, and observant fans will notice tributes to a famous British comic-based lawman both Sharp and Morrison worked on.

The Green Lantern is interesting, thoughtful, and visually impressive. but also intentionally confusing with neither the writing nor the art making it congruent. Hardcore fans expect that from Morrison, but the style is an acquired taste. It isn’t the story itself but the character exploration that intrigues and along with Sharp’s and Xermanico’s art redefines Hal Jordan. The Green Lantern Season Two continues in Vol. 2: Ultrawar.