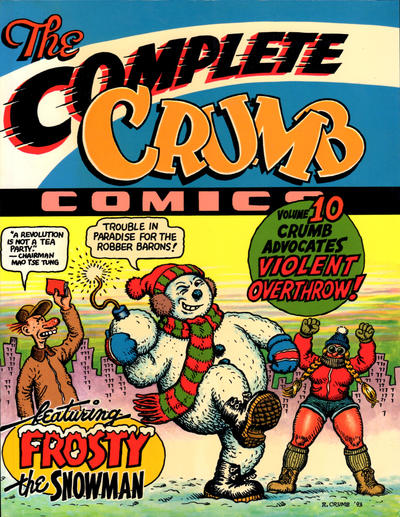 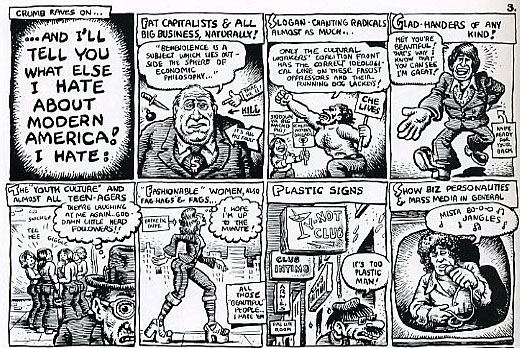 The sustained strips in The Complete Crumb Comics Vol 10 are excellent. However, this collection of Robert Crumb’s work covering very late 1973 to autumn 1975, has a lot of extra material that would normally be dismissed as padding – posters and record covers for his band, the Cheap Suit Serenaders, multiple underground comix covers, two jams with Victor Moscoso and another in an ongoing series of collaborations with Gilbert Shelton, S. Clay Wilson, Robert Williams, Spain Rodriguez and Moscoso  from Zap Comix. There are some good illustrations and some not so good ones, but ultimately many readers will question the need to see quite so many odds and sods from the Crumb back catalogue. For the few, Fantagraphics’ decision to be quite so complete will seem miraculous. Very few cartoonists have merited such a retrospective as this series, and while Crumb certainly has the stature as an artist to warrant such attention, for the general reader some volume can seem uneven.

In this period Crumb began contributing to Art Spiegelman’s Arcade comic magazine, while taking on more commercial work. There are a lot of covers, but not many strips. Those there are, however, are very interesting. For a time Crumb was living with his increasingly estranged wife, Dana, while having a relationship with Aline Kominsky, another cartoonist, who lived in a trailer at their country home. A significant chunk of this volume is taken up with their Dirty Laundry comic in which both artists draw themselves in each panel. It’s a very strange pairing, visually, as Kominsky’s art is very intuitive and child-like, especially in contrast with Crumb’s masterful inking and structuring of panels, but somehow it works.

The story has wild fantasy elements, lots of sex, and spends a lot of time examining the peculiarities of their relationship. It works because both are very self aware and are willing to be open about the mechanics of their relationship including the fantasies that most couples don’t like to discuss, even with each other. They are perfectly comfortable with the dichotomy of a feminist letting her partner ride her, face fuck her until she throws up, and then rubbing her face in the vomit for messing up the rug, and then another day beating up her lover and pinning him to a shed with a pitchfork. Given such content, it perhaps seems odd to call such stories charming, but they are in their own way because there is a sense of the real relationship underpinning them, the kind of sharing and understanding of feeling that is very touching.

The other notable inclusion is a series of half page strips introducing a new character, ‘Frosty the Snowman and his Friends’. Frosty himself is drawn in a cute style reminiscent of children’s illustration and each strip is introduced with a panel of snowy fun that wouldn’t be out of place on a Christmas card. However Frosty is promoting the uprising of the downtrodden proletariat, and his two friends are out to help him blow up the home of a noted Capitalist. None of the characters are politically consistent, spouting slogans and egging each other on through a series of comic misadventures. In the end they succeed in their mission, but it turns out the house was falling down and the owner is glad of an excuse to demolish it and build a new one. Sometimes cited as supporting terrorism, this strip is thought by many to be the reason the IRS investigated Crumb the following year, with punitive effect.