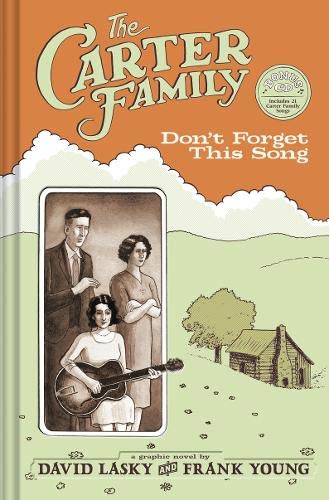 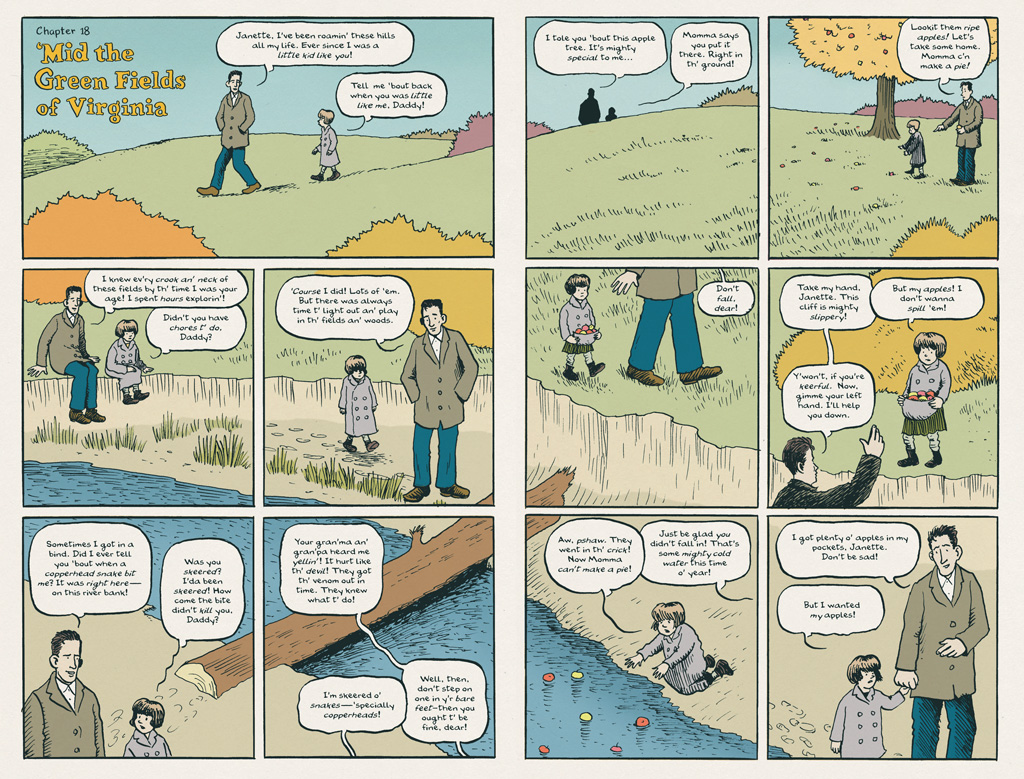 The Carter Family collected and performed songs from American folk traditions, and in 1927 made the historic first recordings of that music. Most readers today won’t know their name, and as author Frank M. Young notes in his introduction, the best handle on the family may be through June Carter, wife and singing partner of crossover country legend Johnny Cash.

Young and artist David Lasky represent one American art form through another, their graphic biography chanelling the newspaper strips of the era, with simple art, flat colour and brisk, efficient storytelling. A particular touchstone is the generation-spanning family strip Gasoline Alley. Chapter titles in a hand-drawn serif face nod to its logo. One sequence (featured image) homages a device pioneered in the earlier strip – a ‘polyptych’  where panels follow the characters’ movements over a single background scene. In general, though, Lasky prioritises effective storytelling over visual wizardry.

A prologue shows the birth of Pleasant ‘A.P.’ Carter into a musical, farming family. Thereafter, we follow A.P., his brother, their wives and children, in a series of short chapters, named after the Family’s recordings. This titling is often ironic, for example, opener ‘My Clinch Mountain Home’ sees the teenage A.P. leave that home chasing work in the city. By ‘I Aint Goin’ to Work Tomorrow’ he’s a travelling salesman, distracted by collecting the traditional songs he hears customers singing. This is how he’ll meet future wife and musical partner Sara, who he achieves musical harmony with in ‘Meet Me by the Moonlight, Alone’, and so on.

The Family’s recordings were an instant success, yet this is no rags to riches story. Young finds further irony in this, most poignantly in a New York visit where they’re chauffeur-driven, but without a cent in their pockets. When they finally get a cheque in their hands, their celebratory blow-out is at a burger truck. There are no rock’n’roll lifestyles either for these devout Christians, though a picnic between Sara and cousin Coy scandalises their community. The camera zooms out, but the consequences of whatever might have happened play out to the songs Forsaken Love, and Will the Circle be Unbroken, and it threatens to split the group. As the stakes get higher, Young and Lasky create some powerfully affecting scenes from the humble props of the Carters’ world – a flat tyre, a tree in the garden.

The Carter Family becomes a brand, stronger than any individual, and the focus shifts to Sara’s ‘gittar’ playing sister Maybelle, before ‘Texas Girls’ sees her and Eck Carter’s daughters contracted into the group. We’re now in the 1930s and the backdrop of Depression era America is effortlessly woven in. They drive past fields ravaged by the ‘dust bowl’ that literally blew away farms, then they turn up to adoring fans outside a half-empty theatre. A.P. waives the prohibitive 50 cent admission, and they perform a triumphant show climaxing with the bittersweet Keep on the Sunny Side.

Biographies can range from hagiographies (worshipful lives of saints) to warts and all exposés and this lands somewhere in the middle. Issues are raised of ownership and credit for the songs, segregation, and cultural colonialism, yet conclusions are never forced. The combination of Young’s minimal text, and Lasky’s understated art (avoiding emotional close-ups) leaves room for the reader’s own response. Don’t Forget this Song is a finely crafted story of ordinary people in extraordinary times, and it deserves a wider audience than existing fans of the group – don’t ignore this book.

The book is helpfully augmented by a bibliography, and (in the initial hardback) a CD of rare Carter Family recordings.